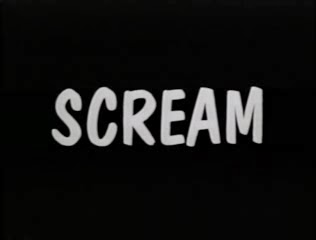 With their rafts missing and no other way out, a group of rafters find themselves hunted down by something (and I emphasize something) prowling in a ghost town after one of them gets murdered while camping in that night.

I wish I could say more about this film but, yeah, that's everything Scream (1981) is and it's not hard to imagine why this title is so forgettable and unlikable. Bad acting, uninteresting characters, uninspired and dim cinematography, and a total lack of scares and blood are the usual culprits you see in a dull horror movie and this film managed to hit every dull branch! I honestly saw nothing to make up for these flaws, not even the little nudity that's probably added to spice it up and, yet, an R-Rating? For what?! An implied beheading?
There's also the fact that the film can't even figure out what's killing these people; It took like forever before we reach its unexciting conclusion to at least hint that the killer is something supernatural but was it even worth it? Hell, no.

This has to be one of the worst slashers I've seen in my life, let's just keep it at that! I suggest taking this short review's word for it and avoid this film if you value your money, your life and, especially, your sanity.

Wait, the last two meant the same thing, right? Meh, my brain's a mush thanks to this film, so go figure...