Slasher films are well known for their methodological killings of everything from sex-brained dumb teens to obnoxious business men through means that always end up with blood being splattered over the walls, usually on a heavy reliance on bladed weapons. Some psychos prefer to keep their weapon simple and classic such as axes, machetes or even a simple butcher knife, while others try to be more unconventional to earn a gimmick by using powertools like powerdrills and the now infamous chainsaw, to something really odd like stiletto heels and even a simple walking cane.

And then we have these; pimped out weaponry hand-made by our loons for their murdering needs. We here in StickyRed will now look into these unusual custom-made weapons of mass murder and share our thoughts on each and every one of them.

Note: This article will only cover hand-held (or for some, worn) weapons, Traps found in films like the SAW or The Collector franchise will not be covered. 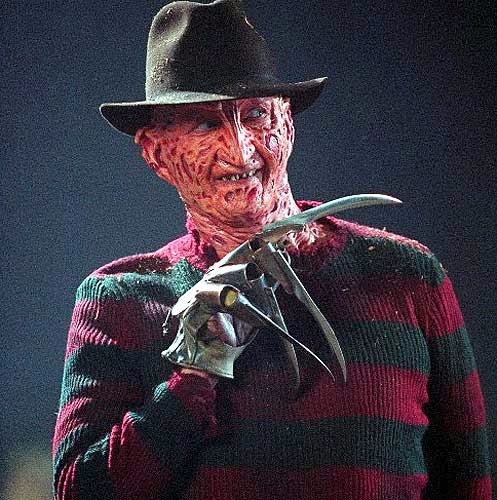 Razor Glove (A Nightmare on Elm Street franchise) - Starting off our list is the most memorable and original murder weapon in this fair sub-genre, supernatural teen killer Freddy Krueger made this glove out of scraps while working in his boiler room, with each finger armed with razor sharp knives. The result, five deeps cuts at a time, a murder weapon that can't be kicked out of your hand (unless yer Freddy and you'll allow it) and a weapon that makes any slasher villain proud!

Now this glove has been rip-offed quite a bit through out other slashers; notable examples would be the one used by the killer in the Mexican title Trampa Infernal (1989) made out of different blades, and a gold variant in India's Mahakaal.

Claw-Nailed Glove (The Demon (1980)) - A precursor to Freddy's Razor Glove, the killer's weapon in this God-awfully cheesy South African slasher has the same gimmick of using all of his five digits for killing, though instead of long ginzu knives, we had metallic sharp nails. Unfortunately, the weapon wasn't used too often and it didn't look that striking. 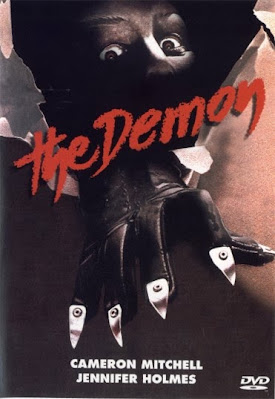 Killer Tire Iron (Sorority Row (2009)) - Perhaps THE weapon that inspired me to do this post, the tire iron used by the killer here sports a hunting knife, a propel tip, a spear and a spade head in place of the usual doo-hickeys. While I find this to be a creative new way to murder people with a car repair tool, there's a tad bit of cheesiness to it that just works. Plus, how often do we get a workable throwing weapon that you can re-use over and over again? 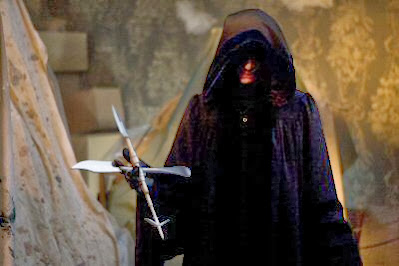 Bone Shuriken (Jeepers Creepers 2 (2003)) - Looking into another throwing weapon, a set of small yet uber sharp shurikens makes a creepy debut in this sequel to a cult fave slasher-monster hybrid as bewildered school staff from a bus full of jocks, misplaced nerds and cheerleaders finds it sporting a tooth. We then see it in action as the Creeper returns for a second round to fully emancipate the bus. As much as it is cool to see it slice through tires, I am a little disappointed that we had to wait so long before we get to see it used to kill someone. Never the less, still a pretty sweet weapon.

Live Animals (Shark Night 3D (2011), The Collector (2009), Wilderness (2006), The Tripper (2006), Grizzly Park (2008), Madhouse/There Was A Little Girl (1981), Without Warning (1980) among many) - Though not exactly "customized weapons" per se, do take that these beasts are trained to kill so it's sortah like customizing them. Though I'm sure there will be more, listed above are some of the slashers I've seen so far that have everything from trained dogs and bears to even parasitic aliens to do the killing; obviously not the most subtle method of murder for some people to see, especially if you're sitting right next to a tree-hugger or an animal right's activist, but you can't argue with results when you see how good some of these animals are in mauling people.

Sledge-Anvil (Sweatshop (2009)) - The heaviest weapon in this list, the welding mask-wearing titan in this impressive little gore flick carries a large anvil welded into a long and sturdy piece of metal piping. Apart from his horde of demonic-looking raggedy babes, its this weapon alone that makes me believe this guy's ain't human and applauding at the gory results of pureed body parts. 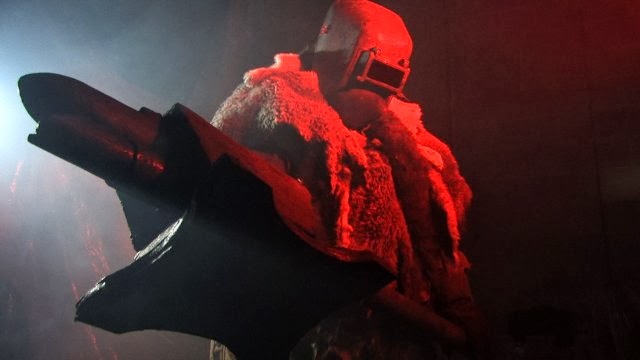 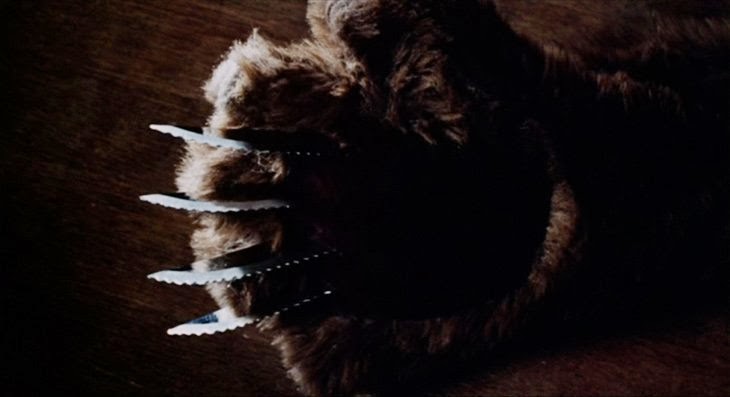 Armed Mascot Suit (Girls Nite Out (1982)) - This is supposed to fall into the razor glove category until I reminded myself that the weapon used here were steak knives taped together and hidden under a bear mascot's suit, thus not necessarily a dangerous digit weapon but more of an armed mascot suit. I admit that this is an ingenious way use a steak knife to kill someone and, even more, a great way to obscure your weapons, but, God, the suit! Why use a suit that isn't terrifying, killer I cannot verbally bash cuz I still respect the strange fans you keep receiving? Why?

Bowling Set (Gutterballs (2008)) - Now this is dedication for a gimmick; keeping in level to the bowling rink set-up of the movie, the notorious avenger BBK (AKA Bad Bowling Killer) has everything in theme with the sport, from his suit to the murder weapons. Amusingly, he shows us all the fun stuff you can do with a set of bowling pins in the opening montage, but I'm a little disappointed we didn't get to see him use the Bowling Pin-Nunchakus he made there. Apart from killer pins, we're also demonstrated the fatality of two bowling balls and bowling shoe laces tied into a garrote.

Noose-o-matic (Trauma (1993)) - Now why on Earth would you over-complicate a simple act of garroting? Designed by Tom Savini for Dario Argento's early 90s giallo, the hand-held auto-noose is one of the laziest weapon I've seen, taking out the fun you can get from a good garroting. Guess the killer doesn't want to get their hands dirty? Or maybe they're not strong enough to decapitate them? Whatever reason they can come up with, I don't hate the weapon, but I certainly can't put myself up as a fan of it either.

Spring-Loaded Blade Disc (Chromeskull: Laid To Rest 2 (2011)) - Well, shit, ain't this a beauty; six blade heads attached together into a throwing disc by the handles, with a spring-base action that can be used to split open heads if done away a victim with enough force. Pretty cool weapon...
If only the movie didn't fail so much.

Razor Staff (Sint (2010)) - Best way to murder someone on horse back apart from shooting at your victims like The Sundance Kid? How about spearing at them with a long saw-toothed staff? Looks pretty cool but we only get to see it used twice or something cuz Saint Nick in this pic only appeared just as often. (The big guy let his little burned men do the killing. tsk tsk)

Rake Rivet Glove (I've Been Waiting For You (1998)) - Wolverine, please copyright your claws or suffer seeing them ripped off like this. For the record, this geek's weapon wasn't even used. A lot. Cuz he only killed like two times. With one of them being scared to death. Fuck. 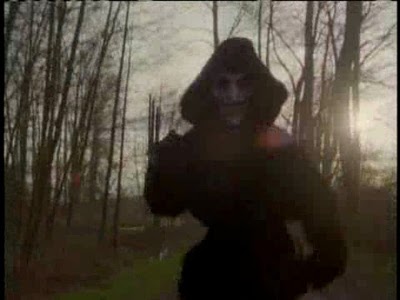 Automatic Nailgun (Nail Gun Massacre (1986)) - Firing 100 nails per second, a souped-up nailgun is the Darth Vader-sounding killer's weapon of choice in this horribly bad yet entertainingly cheesy slasher cult hit. Now if only the killer would stop ruining the weapon's coolness by spouting horrible one-liners... 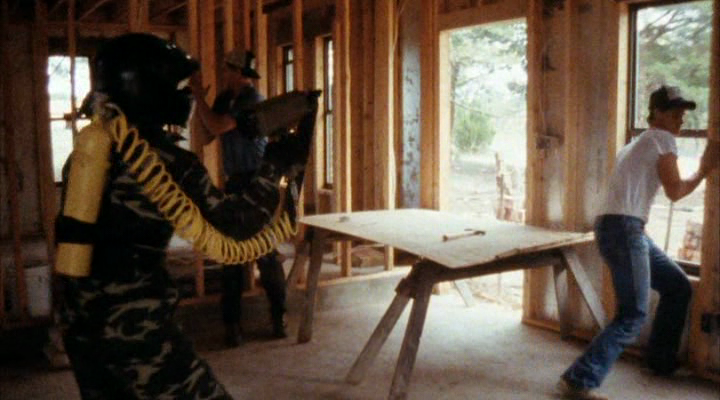 Motorbike Electric Chair (Nightmare Beach (1989)) - Used for a bit until the killer went on to more hand-held and/or creative ways to fry people, a juiced-up hot rod comes in with a built-in electric chair that electrocutes anybody that sits behind the rider at a push of a button. Pretty sweet ride, even more once you know who the masked killer is. 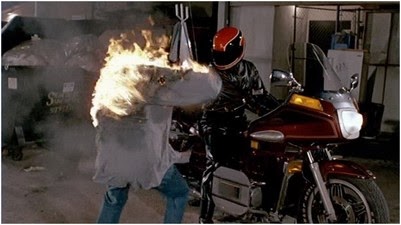 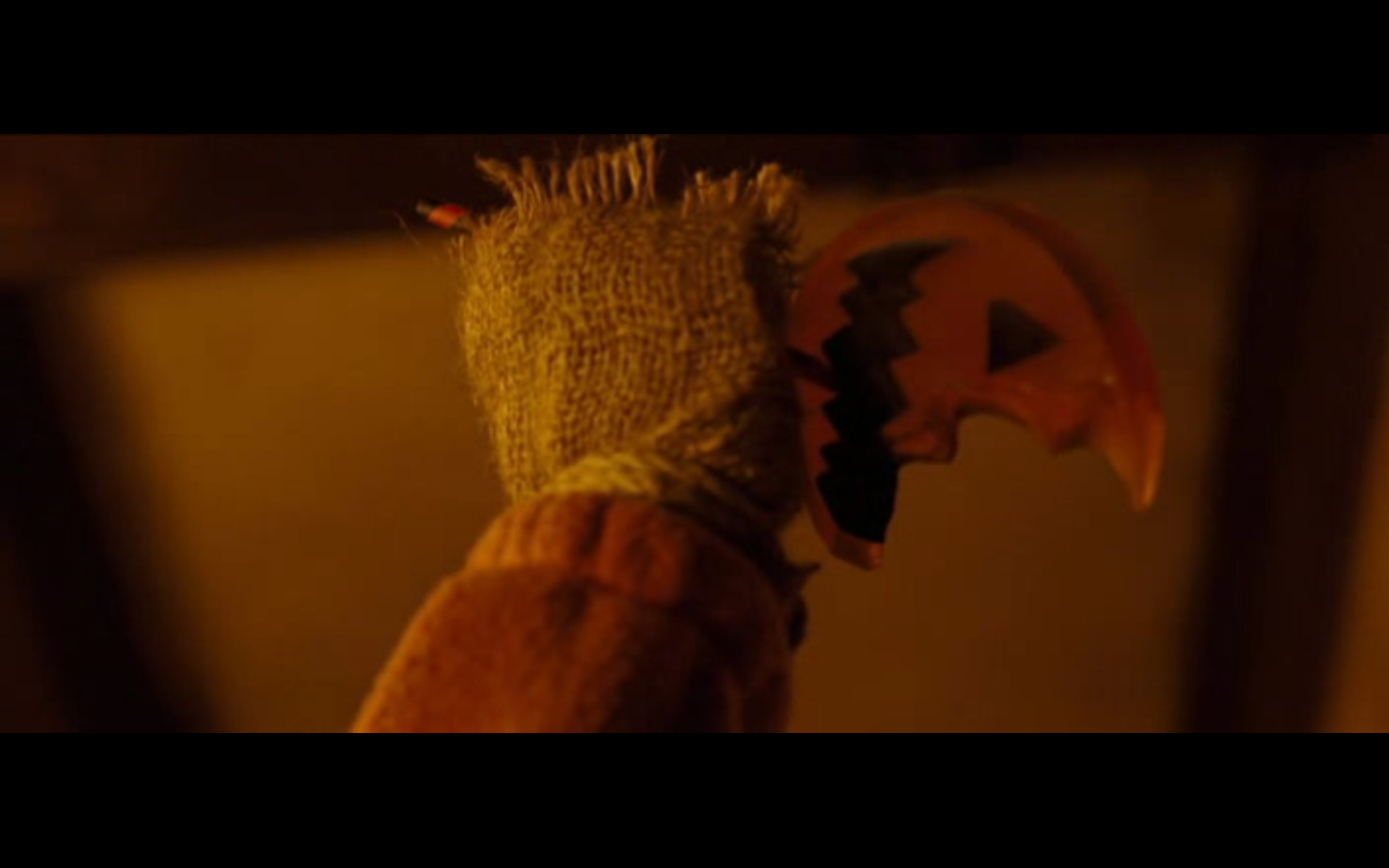 Serious Sweets (Trick R' Treat, Santa's Slay (2005), Black Christmas (2006)) - Before Trick R' Treat, Christmas slashers Santa's Slay and the Black Christmas redux showed us the fatality of getting a sharpened candy cane into parts in your body that aren't meant to digest food. By the time the Halloween anthology hits the videos, we're re-introduced to killer candies with a twist of utilizing a well-known urban legend about razors in chocolate bars before going back to sharpened suckers on sticks. Ah, the creativity of maniacal killings.

Crucifix (End Of The Line (2007)) - If I was a little younger, I would find this blasphemous and hated it. Now that I'm a little older, it's still blasphemous but hot-dang, I wish they did this a little better; a cult of religious fanatics, who believes that the world is ending and it is their duty to "save" as many as they can by murdering them, have crucifixes with hidden blades as their tools of salvation. A little small for my taste, I would have settled for something like a crucifix that is big enough to be wielded like an axe. Guess I can't win every holy war. 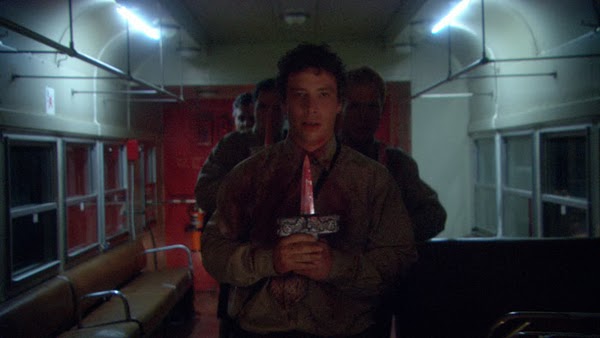 Bladed Fruit-Picker (The Caretaker (2008)) - Um. So. A fruit picker with blades. Genius? Well, I guess if you're looking for a gimmick, something like this could come out as desperate yet imaginative. But no, I'm not overly impressed, just feeling a bit cliched. 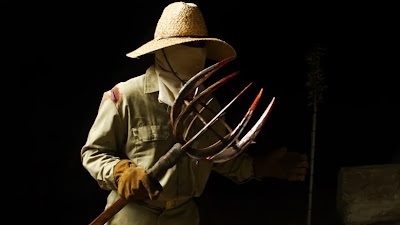 Wax Voodoo (Needle (2010)) - Imagine if Mattel's Thingmaker suddenly let you have the ability to inflict the most painful dismemberment just by breaking the molded toy you just created. Now this is a cool and imaginative way on killing thespians, giving you a clean getaway as you don't need to get your hands dirty! The drawback, it only works if you include a photo of your intended victim during the wax doll-making process, hence a bit of a hassle. 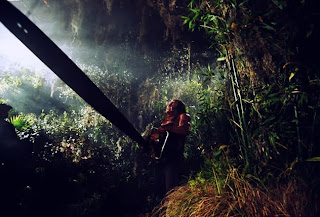 Ten-Foot Chainsaw (Hatchet 2 (2010)) - Okay, this is a bit of a cheat since there is a possibility for a long chainsaw to exist as it is without customizing it but I just had to include it here for no one, not even Leatherface, attempted to use it in celluloid. No one, until Victor Crowley that is; Hatchet 2 marks the franchise's descent into cheesier realms, focusing more on taking up the bodycount to double digits. Just to do that, swamp maniac Victor Crowley takes a chance on two of victims to commit a double murder via groin evisceration using the longest chainsaw celluloid ever laid eyes on. Was there a need in the real world for such tool? Hell, I dunno, but it sure is weird!

So what about you? Seen any slashers with a uniquely made weapon? Had I missed anything? Feel free to gripe and tug my hair for attention! I won't bite til' next time!
Posted by Kaijinu at 9:01 PM