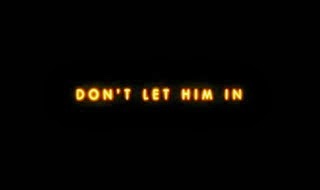 Well, least by the title, we know our killer's a dude, so that's one possible twist down. Now let see if the rest of them fare well?

Calvin and Paige, a vacationing couple, invites Calvin's love-sick sister Mandy for a trip to the countryside. In turn, Mandy invites her obnoxious boyfriend Tristan, who only agrees to tag along as it appears he's in a spot of trouble that he needs to get away from secretly.

Along the way, they meet a wandering backpacker who claims to be psychic and warns them, upon reading palms, that something dangerous will happen if they continue. Scoffing this off at first, they will soon get another round of doom-saying when they hear from a conveniently bypassing constable that a series of bizarre killings had body parts being strung on trees, done by a mad man they moniker as "The Tree Surgeon". You would think that two warnings in one day might be signs from whatever higher power you believe in telling you to watch out, but for these guys? They thought little of these. That is until night falls.

After an long morning, the cabin folks encounter a wounded man that evening, claiming that something in the woods did this to him. Paige quickly patch him up and the two couple let him rest with them overnight, much to Mandy and Tristan's uneasiness.

The next day is when everything finally gets interesting; without spoiling much, one of them shows their murderous side, another isn't who they claim to be. All in all, everybody is in deep shit.

I like the way Don't Let Him In played with our expectations for a bit, but if we're going to look into the story, I do get this nagging feeling that they were trying to do something complex for the basic slasher build; technically, there are two twists, with multiple red herrings and a lot of plot holes that weren't explained well.  Or rather at all. It takes the movie a while to get some bloodletting happen, meaning there's a lot of character development beforehand that works variably.

Once we get to know who we think we can trust and who we wish will die off horribly (there's always one in every movie), this is when the direction and flow of the movie are tested. Some shocking deaths occur and then some accusations and twists, before you know it we're back to familiar footings and we're watching one lone survivor pitted against a maniacal killer, who appears to have his own brand of philosophy regarding trees, which doubles as his murderous motivation.

Despite the small budget, Don't Let Him In did pretty good in keeping the plot as interesting as possible, and while some of the killings did show how cheap the movie is, it's a small flaw. Devoid of gratuitous exploitation such as a high bodycount and random nudity, its a lot more subtle in tone, putting us up to see an unfolding series of unfortunate events take its toll on our characters in terms of uncertainty and paranoia that's quite more developed despite some unanswered plot points and a savage finale.

I must say, Don't Let Him In didn't really catch my attention until I came upon a review of the movie and just tried it out after said review claims that the film is rather average, with some semi-decent twists. True enough, I saw just that; it's not a big game-changer, albeit a worthy effort.

Bodycount:
1 male body seen in pieces
1 female hacked with a cleaver, killed
1 male garroted with fishing wire, brained to death with a rock
1 female knifed on the back
1 male had his throat cut with a knife
1 male ran through with a pitchfork
1 male and 1 female skewered on hay spike
Total: 8
Posted by Kaijinu at 9:10 AM