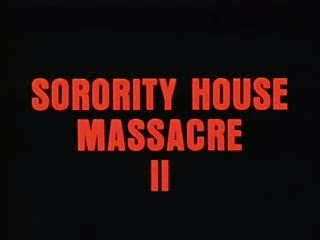 Ugh, these Sorority House Massacre sequels. I can almost forgive the cheap and lifeless production they put into these films, but must they confuse newbie slasher fans by putting in clips from another movie that isn't even a part of its own franchise? That's just confusing, plain lazy and confusing.

With zero relation from the first Sorority House Massacre (1986), this early 90s follow-up has a group of five bimbos staying in a dilapidated house that they planned on fixing up and make into their new sorority house. Unknown to the most of them, a massacre took place in that very house years ago, shown through flashbacks consisting of stock footages from Slumber Party Massacre (1982). With nothing to do, the girls spend their evening showering, walking around in nighties and playing with an Ouija board that they found in the basement.

Keeping an eye on them (much to the girl's uneasiness) is their neighbor creepy Orville Ketchum, whose diet consists of what appears to be raw meat and keeps his keys inside his pants. (No, not the pockets. But inside his pants)
﻿﻿﻿﻿﻿﻿﻿

﻿﻿﻿As a thunderstorm brews that night, someone brandishing a meathook starts murdering the skimpy lot, with the girls suspecting Orville as the culprit. (To be fair, his zombie-like looks doesn't help deflect any blame. Nor is his ability to withstand and survive being repeatedly beaten to a near death state too many times to even consider him human!) Will these girls soon find out who's killing who? And by then, who will be left standing?

I admit there's a certain B-grade cheesy charm to this movie, something that helps viewers who're willing to turn off their logic in favor of ridiculous plotting and seemingly immortal overweight neighbors feel more welcomed by this garbage. To be frank, the single star from my rating was from the fact that this movie did induce some chuckles out of me, while the other half a star was for its sleazy nudity, smooth shower scenes and the fact that this is the perfect example of those slasher films that seem to broil up the clichéd sex=death formula as our girls spend the rest of their evening running around in a dark and stormy night wearing nothing but loose, skimpy nighties.

Aside from that? Nothing worht my time. I honestly remember browsing through my media collection thinking of the next title I'll be watching after this since it's all a waste of time; the horror is absent, the kills are quite tame and cheap, and the reveal in the end is anything but shocking. I'm sure the only ones who will enjoy this movie are gonna be those pre-teen boys who care little about production values, workable stories and character development, and instead wanted to see some boobs and blood. Not sure if they'll find hard-to-kill neighbors funny, though, but I wouldn't worry much about that.

A pointless movie with a confused sense of targeting audience, Sorority House Massacre is neither funny or scary, but overall sleazy in the cheapest kind. I suggest watching the real Slumber Party Massacre (1982) instead!

1 female knifed on the neck
1 female shot to death
Total: 5