Earthquakes, Home Invasions and Ghost Stories: Looking Back at the films I saw last 2013

A lot of interesting titles came out last year; interesting as a lot of twisty takes on familiarity had been thrown around to give us something completely new, may it be successful or not. In here would be the titles I saw that came out last year, most of it was worth the wait, some an uttering surprise (both good and bad) while others just fails me.

So before we walk deeper into 2014, let us look into some of the more recognized horror films of last year:

The ABCs of Death: 26 directors 26 short films. Numerous ways to die. Spanning over 15 countries, ABCs of Death is an experimental stab on an anthology film, running in a staggering two plus hours, showcasing us from the whackiest and wildest deaths to be conjured up by the sickest (and for some of them, talented) minds to spawn over the world of horror shorts. Dare to try a marathon of 26 killer shorts? Be for-warned, some of them bite back real hard. 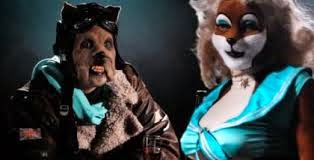 Aftershock: I'm mildly disappointed on how this film ended up playing in real life as I pictured this film to be more of a slasher film taking place either during or after an earthquake. Still, it did get better in a second viewing as I already expected everything that's gonna happen (and a story like the one I imagined might worth thousands as my directorial feature, so no stealey!!!), and dare I say I began to see this as one of my guiltier pleasures. Everything about it is so wrong (I mean would you really rape someone during a tsunami warning? God, no wonder those bastards are criminals, they're as dumb as fuck they can't get a job!), and yet, I can't stop watching the chaos without grinning a bit. This is one for the morbid-minded! 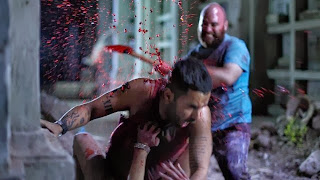 The Call: Halle Berry stars in this engaging thriller-cum-sort-of-slasher about a 911 operator putting everything she knows and desperately tries to stop a kidnapping-in-process. It's one of the better reviews I've made for this blog, but I find the ending to be too cliched. Even for me. (gasp! shocking!) It's a good run while it lasted, so I regret nothing! 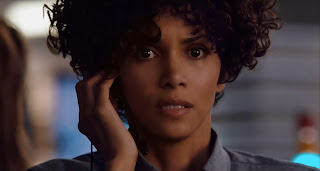 Carrie: an unnecessary remake/ re-telling of a Stephen King classic, the tale of a bullied girl taking hellish revenge on her tormentors is a story too familiar to hate, but if done in too stale, leaving nothing much to remember by. Still a worthwhile watch, but that's just about it. Do love the new gory kills on those bastard teenagers though, but I really wish they didn't go all CG-enhanced on those... 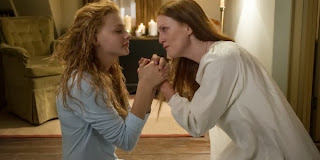 Coffin Baby: no. no. no. this is everything wrong in a sequel. You do not lower down its budget and hide it as art. You do not waste a good killer by turning him into a lame torture-porn maniac that's really tiring for this day and age. But worst of all; you. do. not. and I mean NOT. RUIN A GOOD FRANCHISE BY SMOTHERING IT WITH NONSENSICAL VIOLENCE THAT BUILDS UP TO ABSOLUTELY NOTHING! 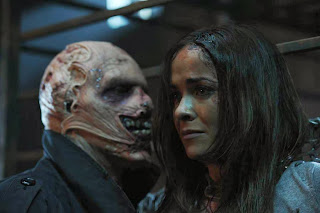 The Conjuring: Now, I'm not a big fan of "ghost movies" but The Conjuring became an instant fave for me. It's simple, fun, and frightening all at the same time, this film is an easy win over director James Wan's other 2013 release, which is a dull follow-up known as Insidious 2... 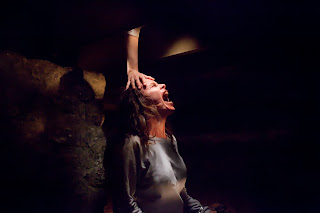 Curse of Chucky: Whether this is a direct follow-up to the whole franchise or a retcon of the events after Child's Play 3, one thing is for sure and that is Chucky's Back, and he's creepy scary again. (So long as you din't mind the new film's minuscule budget, which shines all too obviously with the doll's ever changing appearance and the single premise setting.) 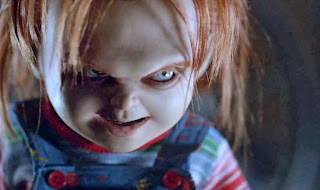 Evil Dead (2013): While not as good as the classic splatter, Evil Dead 2013 is a warm, wet and wild welcome to us fans, as technical effects, grimy atmosphere and non-stop gore is all balls-out for this triumphant return! Better news? Two more Evil Dead flicks on the future! One which will include Bruce Campbell as our fave one-liner spouting man with the chin of steel, Ashley J. Williams. AKA Just ASH! 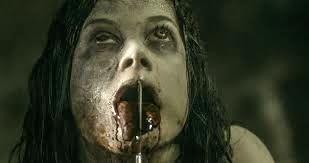 Frankenstein's Army: This is a small surprise for me; a 'found footage" depicting a rag-tag battalion of Russian soldiers find themselves lost in enemy territory, lead by an authoritarian figure who may not be giving out everything he's planning. Soon, these soldiers comes face-to-face against one of the coolest looking steampunked flesh-and-steel monsters to crawl out of horror! While low on scares and done through a pretty simple direction, the story is still interesting and you just can't beat a film that provides monsters. And I mean really provide. 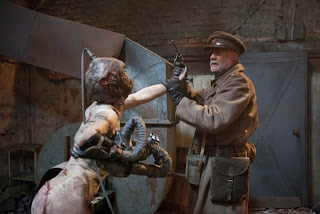 The Green Inferno: I've yet to see this, but the hype for this is just phenomenal! Eli Roth returns to the directorial chair to create this tribute to 70s Italian cannibal flicks, something I honestly believe in need of a good comeback to our modern horror circle. 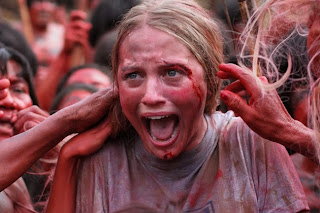 Hansel and Gretel: Witch Hunters: A dumbed down movie about fairy tale kids Hansel and Gretel who grew up as steampunked badasses who're out to hunt down witches with an array of clockwork weapon and explosives. No real plot, but who cares, it's witch hunting! The cool way! 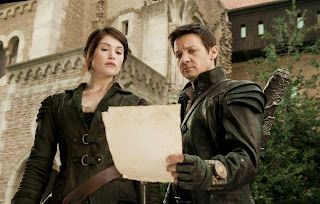 Hatchet 3: So, is this the end of Victor Crowley? Yes. No. Maybe. We will never know. But if it is, all I could say is that it could had done a lot better, as all we ended up with is probably the weakest entry in the series. Still a good watch when it hits you right, though. 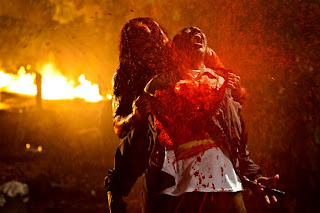 I Spit on Your Grave 2: A shocking franchising of Rape-and-Revenge horror flicks, in this sequel to the 2010 remake of a notorious exploitation classic, a photographer is kidnapped and used as a sex toy by Russian hooligans, in one dreadful and seemingly hopeless situation. That is until a kind preacher saves said victim, and shelters her away from these thugs. But unknown to him, and fortunately for us, revenge by electrocution, clamp-vice and exposure to feces awaits for each of them. 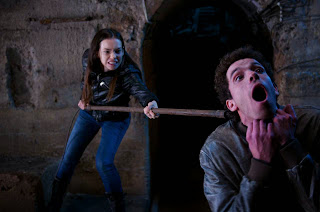 Insidious: Chapter 2: As I mentioned before, this is a rather weak follow-up to an awesome scare flick; it's less frightening, less interesting and barely engaging. The threat of being possessed is something we'd seen before, and barely moving. Maybe on your next feature, Wan... 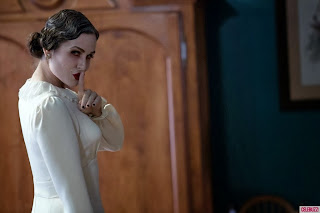 The Last Exorcism Part II :So take it out of the Found Footage format and simply play it straight was the plan for this film. Did it worked? Fuck no. Least not for me. It's pretty disappointing, but the dramatics of a supernatural possession did answer a few question to whether she was possessed or not, but that kinda kills the creepy ambiguity of the original, and set this sequel to something we're too familiar with... 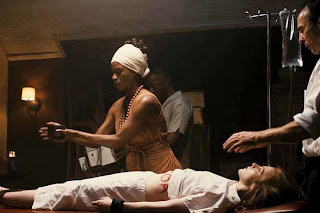 The Lords of Salem: After Rob Zombie's disappointing follow-up to his Halloween remake, my faith to this guy wavers downhill. But I put high expectations on this new film as i do find the concept to be very interesting, up until I finally get to see it. And boy did it let me down. Visual imagery is amazing, but story-wise, I find it really dull. I was looking forward for something really shocking, but all i got is bits and pieces of music video clips.

Mama: this film was a blur to me. I saw it. went through it. forgotten about it. Some confusing ghost story about some kids being haunted by a ghostly "mama". Feck, the original short was a lot creepier. 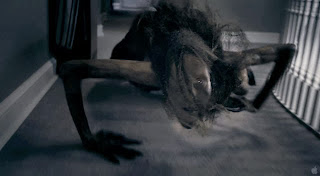 Maniac (2012): A near full POV take on the classic splatter slasher of the same name back in the 1980s, this Alexandre Aja produced re-telling had Elijah Wood filling in the role of our titular maniac, whose obsession with scalping women as revenge goes too well with those sad, puppy dog eyes. Could we finally have a remake that can stand as proud as the original? Witchcraft! And yet, it happened, so...SUCCESSFUL WITCHCRAFT! 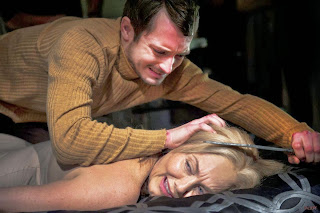 Mischief Night (2013): Director Richard Schenkman's ordinary slasher tries a singular twist of having a lead heroine who's blind, due to a mental conditioning that she puts herself to after a car accident. Pretty cool concept, but it sure takes a while to get it going. it's not overly gory for a slasher either. Shame, but still a good viewing. 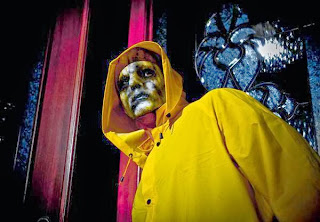 No One Lives- More of a suggestion than an absolute promise, but in the end, with no characters worthy to root for, this is perhaps the most dullest slasher film ever released for our time. Granted the kills are cool, but sometimes one can't be all that shallow... 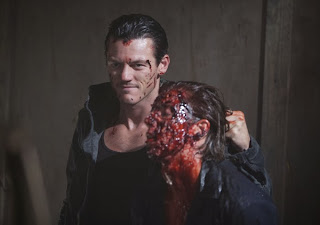 Pacific Rim: Before 2014 welcomes Godzilla (again) to the US soil, a new set of kaijus had already rampaged through our beloved cities...and blown down into smithereens by giant piloted mechs! With a plot not so original, Guillermo Del Toro dishes out something to bury this minor setback deep down into the gravel, and that is Giant Monsters, Giant Mechs, and Giant Fights! Worth a kaiju comeback? Hell Yeah! Bring out the Godzilla DVDs! 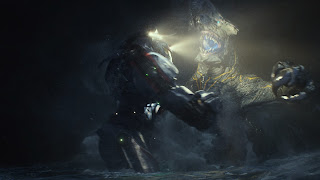 The Purge: Big Concept! Little execution. This utter disappointment to what would have been a non-stop exploitation ride of murder had us plunged in a dystopian America in the future, where in one night in each year, a 12 hour "purge" is held where anybody is allowed to do whatever crime they want. So did we have an all-out gore-a-thon? Nope, just a lot of gun fight and no traumatic ends. Shit. 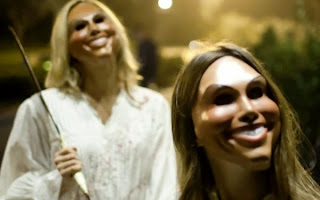 Texas Chainsaw 3D: Perhaps one of the more controversial title released last year, all for the odd reasons: in this retcon, it follows up directly from where the first film had ended, and tries to build a sort-of anti-hero out of the chainsaw wielding lunatic that is Leatherface. Good gore, bad story. How this will spawn a sequel is beyond me. 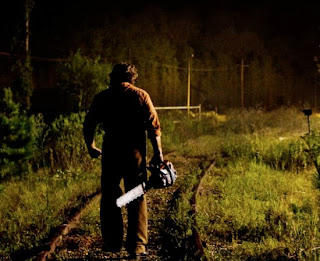 V/H/S/2: Remember the first V/H/S/ horror anthology last released in 2012? Remember how varying was for the effectiveness for these shorts? Well, worry no more! V/H/S/2 is a HUGE improvement over the last film, with more fun and fright as zombies, homicidal ghosts, killer cults and menacing aliens welcomes you to your doom. BRING ON V/H/S/3! 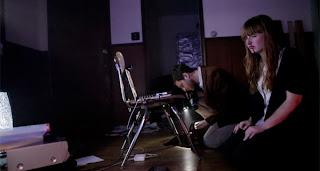 World War Z: This'll never find any true acceptance among serious horror fans, but for those like me, who just want to enjoy a good silly movie before going to bed and welcome another day of work, it's films like WWZ that's just what the doctor ordered. While it's more of an action-adventure film than an actual horror film, the film pits Brad Pitt in a race against time to stop, or at least hinder, a growing epidemic that infects the human population and turning them into flesh-hungry zombies. 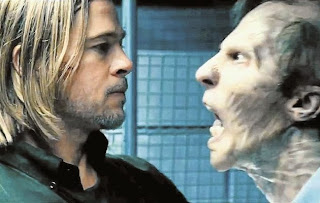 You're Next: Finally! A hype that spoke true! (well, for most of us!) A slasher/home invasion hybrid that puts an entire family gathering into a nightmarish situation as three masked killers, armed to the teeth, began to murder them one by one, up until one of the guests reveals a twisty secret, and that is she, too, is good at killing people. It's gory, easy and non-sensical all the way, but to heck with logic and to heck with haters! You're Next is one film I'm proud to see over and over again! 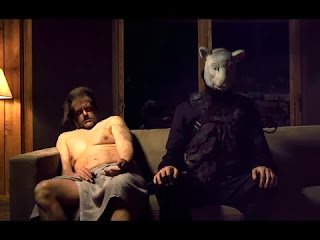 And there's my recap of all the 2013 horrors that we have to go through. What's in store for this year? Well, could do another post for that, but I think it's best to just wait them out and see what kind of ghoulishness we will subject ourselves to.