Twisting Twists in a Movie Within a Movie: Return to Horror High (1987) 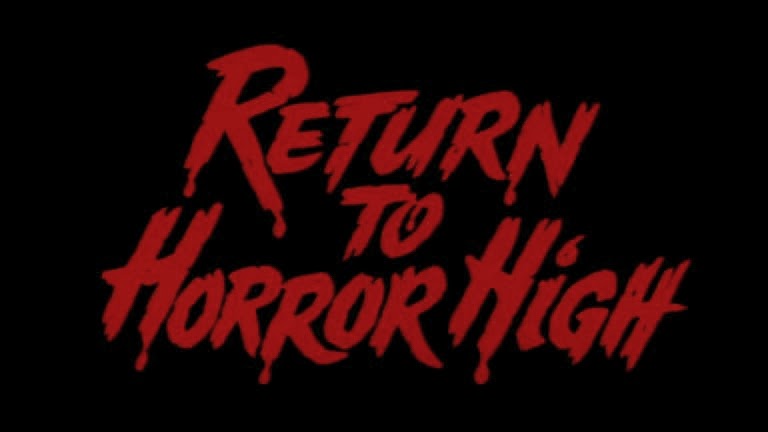 It's hard to enjoy a film that offers a lot through out its run, only to spit on you in the end without giving much of an explaining. Coincidently, it'll be harder to do this without spoiling the entire film for you, so lemme just break down what exactly happened here:

Back in 1982, a mad slasher murdered a number of teenagers at their local high school and was never caught. Now five years later, a film crew decided to do a movie about the murders though they're having a hard time deciding whether it should be a subtle character-driven horror film or an all-out gory and T&A glorified slasher.

It all leads into something quite deadly for them (and confusing to us) when someone begins to kill off the crew one at a time, leaving the last two to figured out that someone is indeed hacking special effects guys and actors to pieces, working up to multiple reveals, plot twists and a maddened showdown between a very deranged killer.

All of these events are told via flashback by the only survivor of the massacre, who is later found that evening by responding police as they storm the murder site, littered with the pieces of the victims. Or are they?

Turns out Return to Horror High (no relation to the 1973 horror film "Horror High") is one of those films that tried to do the old "the kills happened off camera so we can hide the fact no one really died" kind of plot twist that's been done before by better films like April Fools Day (1986). But unlike April Fools, the twist reveal wasn't very smart nor was it explained in its entirely; the fact that they called in real police to clean up and inspect the place, all of them claiming that the bodies they found were mutilated into so many pieces, no one can tell which part belongs to who. And yet, we see these "pieces" get up all in one working chunk in the reveal so how on earth did the cops mistook these as messy piles? Let's also add the fact that we do have a real killer still out there who may or may not be tied into the project in one way, seeing that our survivor is his son (or at least we're supposed to believe to be), so who's who and who's not are churned to the point we can't really tell what's happening, a complete disappointment seeing that the film tries to play everything straight save for a lot of quirky character moments.

I guess if you look through out the film, you could have picked up that Return to Horror High will not make its own continuity a real looker; more than once, the film's direction had us looking into an interesting build-up only for someone to yell "cut" and reveal it's all just a take for their movie. The film never bothered giving us a heads up if the scene we're watching is for real or not, so I really can't put myself to fully enjoy a story that doesn't care much if their audience is still following on what they're seeing.

This is just sad for me because everything else about this film was quite good for an 80s horror film; the budget looks fair as the special effects on some of these kills are bloody good despite being cheesy. It also has a good score, decent acting for most parts, and the film is shot with such care for camera work. It tries to play everything else professionally, so it's just damn awful that it had to be ruined by an incoherent and non-audience friendly story that fails to be both horrifying or comical.

George Clooney appears to be in this through a small cameo (with a mullet) but honestly, I don't care if Michael Jackson played the killer here if it's gonna be this bad. A total waste of time and money.
"Bodycount":
1 male stabbed, mostly offcamera
1 male beheaded with an axe
1 male pulled into a sandpit, killed
1 male slaughtered through a fan propeller
1 male sliced open with a scalpel (story)
1 male had his neck broken (dream)
1 female beheaded with sickle (dream)
1 male killed, later found in pieces
1 male impaled on a spear, shot to death