Behind them is Greed and Madness: Two Evil Eyes (1990) 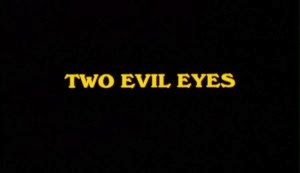 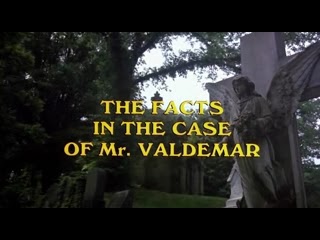 We first start off with Romero's entry, The Facts in the case of Mr. Valdermar; Adrienne Barbeau stars as a money-hungry wife who's conniving with her doctor ex-husband to steal a large sum of cash by, through means of hypnosis, persuading an elderly and dying Valdemar into inheriting all his money to her. But when the old man dies while still under the trance of hypnosis, the two tries to find a way to keep everything as planned but finds themselves in a haunting situation where Valdemar's soul appears to be speaking to them through his freezer-kept body, begging them to release him as "others" are planning to use his body as a mean to exact maniacal violence.

Perhaps the strongest story between the two, Facts brought upon an interesting concept regarding hypnotism and afterlife, hiding satires on consumerism and greed, all the while bringing horrors of both the greedy kind and those involving the supernatural. The direction of the plot goes quite well with the atmospheric tension, working our way into watching the two leads plan on keeping their heads straight around their bizarre situation; not only will the bank, if they found out about Valdemar's untimely death, be suspicious of what might be forged inheritance, but they also had to deal with murderous ghosts. Darkly comic, but played quite straight.

Some gorily detailed deaths and undead make-up also gives this short a passable run. It didn't have much to go for character development however, but from beginning to end, it's quite a ride, making Facts one of Romero's better underrated efforts. 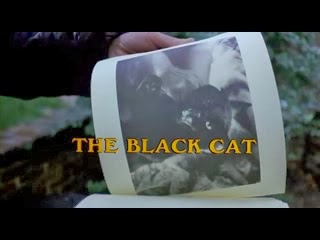 The second short was by Dario Argento, a bloodier take on Poe's The Black Cat; Harvey Keitel steps in on role as a photographer that works on murders scenes, compiling them into a book that publishers find quite good, but would like him to tone down on the grue. This coincides with his case against his girlfriend's new cat, who doesn't appear to like him very much, adding up to his pressure. Things finally goes to an awry development when he murders the cat out of a sick need for art, and too offing his girlfriend after she tried to stop him from killing another animal.

Will he get away with it? Well, unless you hadn't read the original short, the ending might not be all that surprising.

It is in this short where most of the bodycount came in, enticing animal violence and Argeto's keen eye on exploited violence, going perfectly with Savini's skill on gore effects. Perhaps more psychological than methodic, The Black Cat is an interesting look into the effects of real life violence to one's personal life, as our anti-hero lives a life of morbid fascination and bomb wick temper that ended up with a brutal killing spree, thankfully played well with Keitel's intimidating performance as a maddened photographer with a lot going in his mind.

My only concern over this short is that, while the build-up to our lead's first human murder was a good, everything else that happened after that had felt a bit tedious in waiting for the grand finale, which came off rather weak. I might be saying this because I'm already familiar with the story, so I try not to take this out on the film and try to enjoy it nonetheless.

Some may find one and/or both of the stories hardly living up to the tone of the original shorts, or even to the reputation the director had on their more well known movies. Wouldn't disagree with that as the film does felt like it could had done more. Then again, Two Evil Eyes felt more at home with true horror fan for being simple and gory with a double bill-like release, so I think we can still pass this up as a fair film to have around.

Bodycount:
1 male suffers through heart seizure
1 female shot on the head
1 male gets an obelisk shoved into his chest
1 female found sliced in half with a bladed pendulum
1 cat strangled
1 male dropped and skewered on a stake (dream)
1 female found murdered, teeth removed
1 female hacked to death with meat cleaver
1 cat cut in half with wood saw
1 male hacked on the back with pickaxe
1 male hacked on the chest with pickaxe
1 male hanged
Total: 12
Posted by Kaijinu at 7:34 PM