What's better than one cheesy horror film about hot bods in leotards and stab wounds? What about two? Welcome to StickyRed's KILLER WORKOUTS Double Bill review!﻿ 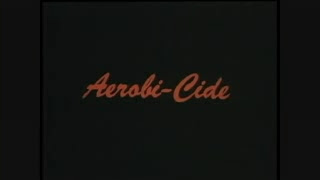 Dig this for an opening act: a model hops into a sunbed at a local gym only to get fried alive as it malfunctions for God knows what reason. The irony? She's supposed to appear on a cover for an issue of Cosmopolitan magazine.

Next thing we see is the same gym, years later, showcasing all the busy bodies in tight leotards and leg warmers doing dance routines and exercises for our viewing pleasure. (As one would expect in a movie called Aerobicide!) Some montage and sultry poses later, one of the regulars of this fine establishment gets murdered by a king-sized safety pin whilst showering. How a pin can be used to stab someone to death or is strong enough to put holes into heads fatal enough to kill them is beyond my knowledge, but manageress Rhonda isn't gonna have any more of her clients dropping like flies!

In comes in Lt. Morgan, a hired detective who goes into interrogating the staff and one guy named Chuck, who claims to be the gym's co-owner. Then there's the weird jealous ex-boyfriend Jimmy who has been stalking the joint for some time now. The more suspects shows up, the more the kill count goes higher, with some of these can-be-killers dying along. So who is this gloved killer? Why are they doing all this? Are they the same one responsible for the tanning bed incident years ago? And where on Earth did they bought that king-sized safety pin that works so well as a murder weapon?

The film may sound like a lot of loops and twists, but Aerobicide is actually pretty cheesy for a supposed murder mystery, hence me having a hard time trying to swallow any of this as serious banter. For one, why not just close down the gym for a while instead of risking the lives of your patrons, staffs and bypassers? And all this in a few weeks? Phenomenal! Then there's some issues with the film's technical aspects; lighting on some night/dark scenes makes it hard for me to make out who dies, effects used in these murders are pretty cheap albeit bloody, and then there's the uninteresting dialogues we have to put up with, more mind-numbing as they are inaudible in some scenes.

Still, for bigger fans of hammy horror movies, this might be a fair enough 80s time capsule for its worth; there's a level on its badness that it's almost comical and could even push some viewers to forgive its flaws for entertaining them and keeping everything on a flow. T&A and leg-spreading routine montages is also another reason for some to enjoy this, cheesy as they are played along to some rocking 80s soundtrack (a rarity of its own due to limited release) and had the girls wear the most provocative looking tights I've seen. Scares and gore is low on the counter, but even if so, this makes the movie far from being the worst dance-slash hybriding the 80s can come up with. (Have you seen Slash Dance (1989)? Take my word for this, stick with Aerobicide...)

In the near end, it tries to play it straight with some nice twist and some last swings on piling up some more dead bods, but is Aerobicide good enough to count on as a deserving purchase? Well, depends on you, but it's good enough for me as a single night's renting or two.

Itching for a silly supernatural slasher? Hot bods being tortured with hot-water spewing showers? Ghostly visions and killer gym equipment? Then step right up to this crazy, yet gleefully gory late 80s horror!

Welcome to Starbody Health Spa, the coolest and sexiest health spa to exist, featuring all the goodies from synchronized dance classes and automated facilities to yummy health bars and an annual Mardi Gras party! But the spas' reputation is about to get tainted after strange incidents begin harming its patrons, including a chlorine leak that blinds a girl, jumping boards on swimming pools breaking off by themselves and one guy being crushed to death by a gym equipment.

The owner of this joint, Michael, sets his suspicions on various possible causes, including an issue with the spa's computer system which might be a sabotage attempt by his brother-in-law who is working for him as a programmer. He's apparently crazy angry at Michael cuz he blames him for his sister's apparent suicide but, then again, what of the ghostly dreams Michael's been having about his wife reaching to him from beyond the grave? What of the unseen forces that have been mangling people by throwing them off in the air? Could it be his wife seeking revenge from the afterlife?

Well, it seems to look that way, or maybe it's both?

While it does try to play around with what might be causing all these accidents as some form of gory mystery, the culprit is pretty obvious considering how these incidents are impossible to be done by some guy working behind a computer monitor. Thus, no matter how much it plays itself straight, Death Spa is just too silly to be taken seriously with its over-the-top situation, utterly hammy scripting, and a momentous amount of sexy fillers ranging from full frontal showers to chicks running around in their underwear. (Then there's that foreplay involving a blind lady eating a rather phallic asparagus. Don't know if it counts, though...) It takes a while before people actually starts to die off but once it does, the cheesiness of the film goes off the scale as everything from acid showers to possessed frozen fish start to take the lives of our hapless health enthusiasts, almost to a point that its so surreal with the splatter, even more chaotic once the Mardi Gras party starts and leads to a fiery finale.

At that point, on a proper mindset, Death Spa can be enjoyed as a fun and visceral late-80s cheapo that you can rent overnight for a freaky run. Regarded this is a sad attempt to do a supernatural slasher, I'm pretty dang sure you can do worse than this.

Bodycount:
1 paraplegic female sets herself on fire (flashback)
1 male torn in half
1 female ran through the neck with a javelin
1 female showered with acid
1 male beaten to death
1 male had his face mangled and crushed
1 male ran through the face with a metal beam
1 female killed offscreen
1 female had her hand shredded in a blender, killed
1 male had his throat ripped by a possessed fish
1 female shredded to bits by an exploding mirror
1 male caught on fire
1 female seen dead
1 female seen trampled
1 male seen dead
A number of victims presumably burned to death
1 male electrocuted into combusting, shot to death
Total: 16+
Posted by Kaijinu at 6:35 PM