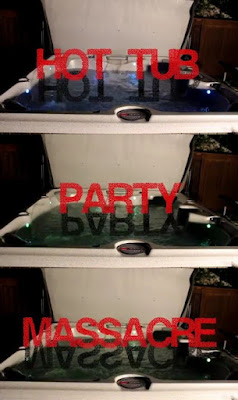 I get it: not all movies exist to be the next big hit or cult classic everyone will be talking about from years on end.  Some films are simple there to entertain us. Distract us from the cruel reality outside our comfort, even if it only lasts for an hour and a half. I get all of that. Still, I cannot distance myself from the fact that the word "entertain" is subjective itself, as one thing that entertains you does not always mean it'll be that entertain for the next guy.

This being said, Holy Hellions. Did this movie wasted my time.

Perhaps I myself was to blame: I was looking around my hard drive for a fun movie called "Pool Party Massacre (2017)" and accidentally started watching this one coz it has "party" and "massacre" at the end. Instead of stopping it and go watch my intended viewing for that evening, I decided to give this one a try in case it'll be worth my while and now I'm writing this review to kinda apologize to myself for being curious enough to sit through what could be someone's film school project.

So we start the movie with a news report about an escapee serial killer named Fred Banning, who murdered 18 during his murder spree before he got captured, and is now believed to be making his way back to his old stomping ground to do more killings. Everybody is afraid save for a quartet of college girls who wins a school lottery that landed them a weekend getaway at a luxurious spa. (With a hot tub) As they strip naked and do sexy shower scenes and pillow fights, or get really naughty with their boyfriends who decided to drop by, our killer arms himself with a garden claw and starts hacking random coeds before making his way to the girls and their dates.

I guess we can thank the universe that this film's only an hour and twelve minutes long, which meant my stay was a quick one but, with the way Hot Tub Party Massacre's made, it honestly felt longer than that. Way way longer. With so little other substance going on apart from watching a bunch of 20 somethings attempting to act and be funny (Did I forgot to mention this was a horror comedy? I did? Well that's coz none of the jokes were funny...) or do some horror stuff (And I use the terms "horror" loosely and "stuff" strongly), I vividly recall trying to keep myself awake to see whether this film is going exactly where I expect it to be or if it'll do something relatively new. Sadly, it went with the former, doing exactly what a hundred slasher films or so have done before including that Friday The 13th Part 2 (1981)/A Bay of Blood (1971) sex-a-pade skewering. (You know the one) It's unoriginal, dry and very dull, with kills partially or mostly offcamera leaving little satisfaction for us gorehounds, but I think those looking for some good T&A will got some kick out of this as boobs, butts and bumpin' uglies are ever present in the second half. (Sexy but, no. I came for blood. Not for boobies.)

Perhaps I watched this movie with a wrong mindset as mentioned prior, not all films aim to be great and is simply just there to entertain us. Hot Tub Party Massacre is obviously a film made to entertain, albeit in a very cheap manner, so I am sure there is an audience for this film somewhere out there and I'm just not one of them. Far from memorable, intense, hilarious, gory, or just be good in general, I say this is one dirty hot tub I'll be gladly avoiding and one party I should have turned down.