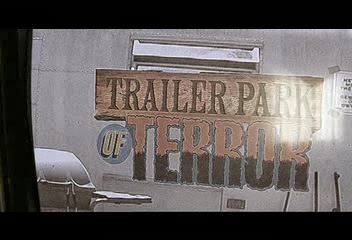 Mindless and gory fun galore this way come in this low-profile, zombie-slasher-splatter mash-up!

In exchange, she's there to serve him for eternity, massacring anyone who ventures into her domain, the now abandoned trailer park dubbed The Trucker's Triangle. (Roadies get in. No one gets out!)

Twenty seven years passed and countless drive-byers disappearing, a group of six hooligans and their young pastor chaperon were returning from a retreat when their bus crashes and leaves them stranded in the middle of a raging storm. But spotting the seemingly abandoned Trucker's Triangle not far from them, the hapless group has no choice but to take shelter in it, wherein they are warmly welcomed by a still beautiful Norma. Ghost stories and dinners get passed, all seems fine until evening draws nearer to midnight.

What looked like a night of messy yet comfortable stay, the youngsters will soon find out that Norma isn't what she seems; a revenant with an unholy mission, she and a renegade group of undead rednecks are out to kill off these kids for fun and they're gonna do it while the night is still young, with deep-fried meat and rock-and-roll!

Trailer Park of Terror is what Two Thousand Maniacs! would have been given that all the folks in that town where more zombified, outrageous, a little fewer, and handled by a more loosened-up Rob Zombie-esque director. The film is nothing new when it comes to the gore and kills, but the beauty of it is just that. It never was trying to be anything else. It's straight-up redneck horror with victims being tortured and killed systematically in one various manner to the next, which is very impressive given the film's low-budget and tight schedule.

The film is steadily paced around the first act, but it eventually picks itself up by the time the zombies show up. Beforehand, the opening scene where Norma's being picked on by neighboring trailer trash was actually pretty strong, emotional and raw, making her character root-worthy with her massacre, though her motives as a zombie temptress throws this off, sadly, as she levels down with the zombified versions of her redneck victims, simply notorious albeit sickeningly enjoyable. It's almost a curveball throw at us with all that serious tone of the opening going out of the window just for it all to turn a nearly-comical splatter film with a lot of outrageous scenes, over-the-top gore and undead hicks.

Speaking of which, the zombies themselves are the real star of this film, their designs well made and the make-up done for it being really impressive. They have more spunk than the victims (which are stereotyped with only a few lines or identifying moments on screen); we got one who has a huge crush on Norma and acts as her right hand thug, another who has a habit of filming murder-porn, and even one who rocks a mean guitar solo. (And goes knife happy when you touch his trippy "shit") They're mean, sometimes hilarious and takes a lot of our attention whenever they're on screen with their whacky interactions. (So much bonding whenever you're putting your bud together with a staple gun!)

Soundtrack is cool, befitting the Southern fried tone of the film with a bit of death metal and the visuals for this film are overall amazing. The only thing I find missing here is that it could have gone away with a more solid story than just zombified killers out for a night of devil's play, but as far as gruesome kills and cool zombies are concerned, I can bypass any flaws in tone and direction and just mindlessly switch off to savor it.

Trailer Park of Terror is everything its own title is promising; a perfect party film viewing for all lovers of cheese, viscera and zombie-redneck-torture-families. Very low profile, but overall satisfying!