A Family that Slays Together: Seed of Chucky (2004) 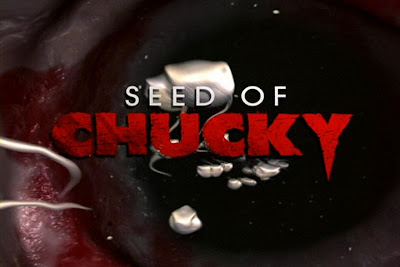 There will come a time for every slasher franchise where they all just let loose and just f*ck around. Jason had his by the time he came back from the grave as a demonic worm-like thingie that makes you melt, Freddy had his during the time he had decided to kill off a 90s stoner by turning him into a video game sprite, and even Leatherface when some director decided to turn him from a menacing cannibal to an annoying, wailing transvestite with a powertool, in an attempt to reboot the franchise for The Next Generation. What these three had in common is that they just decided to dump everything we came to know and love about the killer when they first came out (as in, you know, they're scary) and just traded in something so silly and out-of-place that they're completely out of character.

Some of them did learn and went back to terrifying roots, but others found moderate success that is workable enough to try again. The latter happened to Chucky the killer doll of the Child's Play fame by the time he came back as a gothic, stitched-up freak back in the later 90s, paired up with a new and equally homicidal children's toy named Tiffany. While it was a shock for the series' fans for its sudden shift of tone, Bride of Chucky still found an open audience who loved the duo's humorously dark exploits and whenever there's love for a film, there's bound to be some sequels.

Risking to spill some beans for those who hadn't seen Bride yet, Seed of Chucky took place some time later where the last film left off, featuring a new sentient doll named Glen (previously "Shitface") who was last seen crawling its way out of Tiffany's burnt body and attacking a curious officer. We don't know what happened after that but it appears that this baby doll grew up a pacifist, abused by a rather dirty looking English fellow who's taking stand-up ventriloquist comedy as a profession. As popular as he is with the crowd, the kid can't help but think of what his parents were before they "abandoned" him but as luck has it, he soon found out from the that Chucky and Tiffany's body are now used as props for a Hollywood horror flick.

Escaping captivity, Glen found his way to Hollywood and met his parents, accidentally bringing them to life by chanting the mystic words engraved in Chucky's amulet (as seen on Bride). Although confused at first, the two pint-sized killers accepted their kid with a problem: Seeing they're parents now, Tiffany wants to give up killing (cold turkey!) for a life of luxury and parenthood. Unfortunately, Chucky is far from giving up his hobby (since it relaxes him) and he plans on raising his kid to love it as well. Things went off with a rocky start but the two found their way to help out each other at some point, (so long they don't discover each other's bloody little secrets) plotting to ditch their plastic bodies once and for all, setting their eyes on one specific star: Jennifer Tilly! (and the rapper, Redman)

Bound for blood and a lot of gross-out humor, Seed of Chucky is the strangest entry to the series, parodying reality drama, family domestics and lampooning Hollywood as the breeding ground of spoiled stereotyped actors, paparazzi scumbags and road accidents involving Britney Spears. It's no longer scary (Nor tense. Nor creepy) something not a lot of horror/slasher fanatics out there are going to swallow without a fit and yet I find the film as something I can enjoy the moment I switch my mind off and just swim with the cheese.

Seed is technically a splatstick comedy where fresh, dismembered body parts and jet-spewing blood is the punch line in every joke. Incidentally, Seed showcased the series' most gruesome collection of deaths including a nasty acid burn and one mean family massacre, straying far from the subtle yet creepy deaths the first three of the series had. Apart from this, the film also tapped into being a comedy of drawn-out proportions as everything that's happening around the dolls are just plain nuts (and we slasher fans have a high tolerance for nuts!); for one, the subplot of Tilly trying to seduce rapper (turned director?!) Redman into getting the role of the Virgin Mary of his religious holiday epic is downright laughable, but with Tiffany's struggle to leave out killing for a better life through self-help guides and Glen trying to figure out if he's a boy or a girl, Seeds' sense of humor could have been a movie on its own.

Still, horror hasn't fully escaped this film; the gruesome opening murders had staple enough slasher tropes including POV shot of the killer and an intense stalk-and-kill, and the fact that the killer doll duo is still out doing what they do best is still pretty upsetting for the weak of stomach. Honestly, so long as the film is gory, intriguing and entertaining, I can overlook any lost of dread in a horror franchise.
﻿﻿﻿﻿
Sadly, not all fans are gonna agree with me with this, and I can understand; the jokes are hit-and-miss and will depend on the viewer's taste. Not all can be a fan of parodying home domestics and homosexual urges, nor will they be as accepting to see their favorite star killer devolve from a creepy, sentient murdering stalker doll, into a family man who's this ready to just give up being human to be the most notorious slasher in history! (cue lightning) For some, to see Chucky trying to be a "good" daddy to his gender-confused (or as he takes it, "multi-talented") kid would be to see him in his lowest (that, or him masturbating into a cup after reading Fangoria), but in the end, just as Bride of Chucky, it's all about seeing horror's biggest killer doll in his reign, offing people.

The film looks polished, slick and the animatronics are as superb as ever; I really do love the fact that the casts are poking fun at themselves, showing a bit of agreeable humor to how silly Hollywood life can be. Don Mancini has his directorial debut in this entry after years of writing for Child's Play movies which was fun to see what kind of skill he has backstage. (and also might explain Glen (or Glenda's) gender identity crisis sub-plot)

May you be a fan of the series, or slashers in general, Seed of Chucky is at least a worthy ride either for keeps or rents. For those who're disappointed to see Chuck going beyond stalking an innocent kid in a mean-spirited manner, just think of this as the franchise's way to broaden up their approach. I mean Chucky was chasing the same kid for three movies...