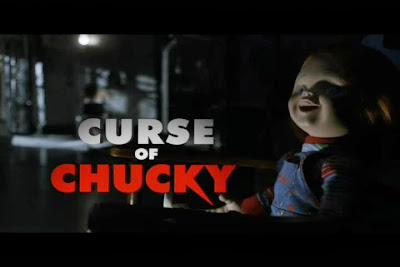 After almost a decade since the last entry, Universal Studios finally give us this follow-up to their Child's Play franchise, albeit toying with us whether this entry is going to be a reboot or a sequel. While the possibility of a reboot is, as of writing this, currently in talk, Curse of Chucky comes in to satisfy long on-going fans, promising that it will return to the serious tone of the first three films.

In this entry, Chucky is back in one piece and mysteriously delivered to the house of one Sarah and her paraplegic daughter named Nica. Believing to be either a prank or a mess-up in the delivery, the two didn't think much about the doll until that night, where Sarah appears to have committed suicide by "stabbing herself".

Flying all the way to comfort Nica in this time of loss is her sister Barb, who tagged along her yuppie husband Ian, their daughter Alice, their live-in nanny Jill and their pastor friend Father Frank. However, it seems that Barb has a secondary intention for the visit as she attempts to make a settlement with Nica to sell the house. Of course, Nica isn't happy with this suggestion, much to the tension coming in between them, but agrees to let her sister's family stay for the night to keep her company and settle this issue in her own terms later.

Meanwhile, Alice finds Chucky and instantly loves the doll, spending every minute with him much of Nica's approval. This inevitably lead to a bizarre series of deaths and accidents, including electrocution, rat poison and a mean hatchet, all until Nica is left for the picking and a revelation shows what ties lie between her and the killer doll.

Honestly, Curse of Chucky is good, but not enough to be a grand onscreen return for our little killer; it tries to do the same kind of build up and tension from those of the first three films of the franchise by taking its time focusing the first hour around Nica's family dynamics and the drama surrounding them. This is done in a slow burn direction, which means that the movie practically drags itself around on a scene or two, having the kills spread out far in between character moments until the climax. This, however, may not be a completely bad angle if you would consider how well this worked with the looming gothic vibe this movie's reeking with, providing as much atmosphere as needed to at least intensify some of Chucky's creepy stalking.

In the matter of this productions' minuscule budget, it's kinda evident from the fact that the entire movie mostly limits itself at a single location and that the animatronics used for the doll effects have their shoddier moments. The multiple dolls used behind-the-scenes looked nothing alike from one another and some murders were cheapened to an awkward degree, including a kill in which mostly involves Chucky just staring at his victim as she electrocutes to death. (A really lame one, if you ask me) The comparably less-than-stellar effects also hurt the mythology concerning Chucky being near human underneath his plastic casing as, while it was fun to see Chucky re-attach his own head and survive a knife stab in the back since he's a doll and all, the earlier films already established that if he was to be stuck inside that plastic body for a long time, he would become more human. Curse made it clear that Chucky was in this doll body for more than a few days now, so why isn't he still all fleshy in the inside? Mancini has a lot to explain...


Not much can be said for the other characters as they're mostly kinda uninteresting on my book despite all their interactions within the first half of the movie. My only exception happens to be Nica, played by Brad Dourif's own daughter Fiona Dourif and is the only character who managed to stand up (irony intended) for being observant enough towards the strange incidents happening since Chucky's arrival, as well as being head strong despite her disability. I frankly expected Alice to be the other half of a potential final girl duo in this picture, as any kid who ends up keeping Chucky in the first three films tends to do much more in pushing the story further into something interesting, but we got none of that and she ends up just being "there", I guess breaking the norms?

It kinda sounds like I'm complaining a lot here, but truth be told, Curse is still a hoot as it still delivers some good scares and straight killer doll moments. Chucky's back into being menacing and the second half is rather fun with twists that are acceptable and whatever onscreen killings we get being bloody enough to satisfy. Heck, it even gave us a few surprises at the end with a few familiar faces popping up in the last minute.

Directly released to video, Curse of Chucky is a slasher struggling to get back into its prime and perhaps one of the few to try this without undergoing the remake treatment. Perhaps a remake will come as Mancini and Dourif does show some interests in doing it, but for now, if you can overcome Chucky's ever-changing plastic face and cheaper bloodshed, then get ready to be Cursed.

Bodycount:
1 female found stabbed on the gut with scissors
2 males seen killed in car crash
1 male decapitated through car hood from a car crash
1 female electrocuted on a soaked live outlet
1 female knifed on the eye, gouged
1 male had his jaw hacked off with a hatchet
1 male killed, method unknown (flashback)
1 male had his throat cut with kitchen knife
1 elderly female seen with a plastic wrap over her head, killed (?)
Total: 10