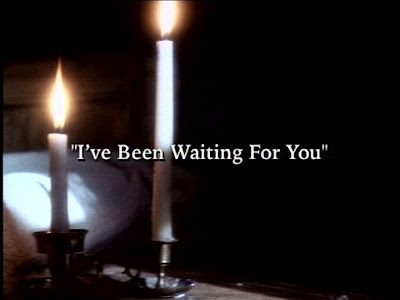 Oho! Well now, this is certainly something I hadn't seen for a long while now; I caught a gander of this title when I was about six as a VHS tape that my dad rented. Didn't care quite about it much since I understood very little of what's going on (too much talking and very little blood makes lil' Paul bored and play with his toy robots instead~), but after finding this roaming around as a rental in one of my local video retailers, I decided to see if maybe I'll get it now. The good news is I did, but it also help me realize that I should had just left this movie alone.

First, the story; new kid Sarah arrives in a small sleepy town where, three hundred years ago, Sarah Lancaster, a witch, was once burned at the stake and swore to kill the descendants of those responsible. What does this has anything to do with Sarah, you ask? Well, apart from sharing the first name of the accused witch, but the house she moved in to just happens to be the one once owned by her. Because of this, a group of popular kids (who're all the teenage descendants of those Lancaster cursed) looks down at her, but one of them gave her an offer to play along with them; at a costume party, Sarah has to pretend to be a psychic, giving information to her customers, fed to her by two of the cliques in secret via microphone.

All was going according to plan until someone began giving Sarah disturbing facts about the rest of the popular kids. Inevitably, they were disturbed and outraged; one of them left the party in complete distraught, only to be attacked by a hooded, masked figure with a pair of extractable metal claws (Like Wolverine from The X-Men) and dying in fright. 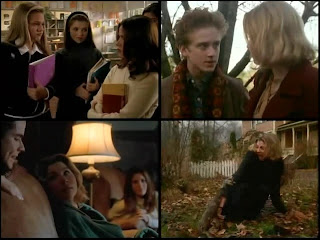 This news of this death soon became the talk of the school, and Sarah became a suspected hex. However, with no clear evidence of the girl's involvement with the murder, the rest of the popular kids tries their best to prove Sarah being a witch without losing their cool, or their sanity. Unfortunately, with strange accidents afoot, and constant attacks from the mysterious hooded killer targets them, it isn't too long before they're forced to take drastic measures to end this.

Being released as a TV flick, I've Been Waiting for You was a tame comparison to the rest of the late 90s dead teenager movies after Wes Craven's Scream. Made with zero gore, little sense of dread and a very minuscule bodycount, the film hardly stood up as a workable horror film, nor as a thrilling whodunit as none of these kids hardly felt like they're in danger. Yes, we do have a killer running around with a metal claw, but more or less, these stalkings never seem to build along with the story as they're kept pretty short and random, plus this guy was never intimidating to look at to begin with and he only made two successful kills, with one of them barely shed any blood at all! 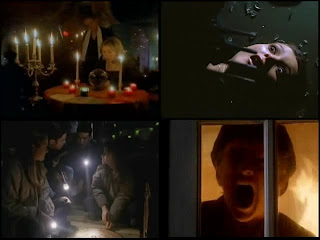 Any sense of mystery is weak and remains unengaged since none of this victims were worth the trouble. It really felt like these guys would do more damage to themselves, and each other, than some random serial-killer wannabe with a working Wolverine prop. The plot even tried to put some sense of supernatural to it due to the success The Craft (1996) made a few years back, but it's made way too obvious that we have a human culprit working behind the mask. A twist in the end suggests otherwise, however, but it was no more than a weak attempt to shock us with a reveal we never expected. Sure got me, but after all that runabout that eventually lead to nothing, I never cared much about it.

Overall, I've Been Waiting for You looks more like the kind of horror film that could scare the jeebies out of anyone below 13 yrs. (But with this day and age, I'm not so dang sure about the credibility of that claim) It's cheesy, it's dry and it awfully hollow, anybody with the right sense of mind would clearly agree that this has to be one of the duller attempts to feed off from big cash cows hypes of that decade. If you're easily scared of your own shadows, or at least would like to feel smarter than everybody else for once, then hear this movie call out and say I've Been Waiting for you...