Night of the killer naked mannequin: The Fear: Halloween Night (1999) 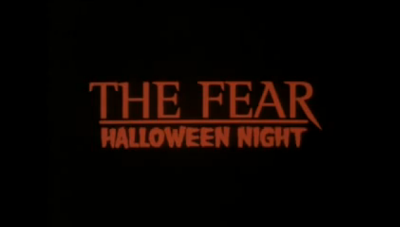 Just when you thought films like Tourist Trap and Maniac made mannequins quite the unnerving object to appear in a horror flick, you'll be in a big surprise...

A follow-up to the rarely discussed 1995 horror flick where a small group of friends in a cabin gets killed off by their own fears (sortah), Halloween Night bring us yet another group of teenagers who are planning to celebrate Halloween in a friend's countryside farm, as well as join him in a ceremony that's supposed to help them harness their fears. My memory of how exactly this ceremony goes is a complete haze (nor do I recall anyone ever discussing it in the movie now that I think harder about it) but all I can tell is that it includes dressing up as whatever scares these teens the most in Halloween, which may have been quite easy for this film's costume department as these kids dress up in the lamest costumes ever. (One guy's afraid of taking risky decisions. You know what he dresses up as? A lame sheet with sharpie drawings of question marks all over it. Charming...)

Anyway, our hero's biggest fear is his dad, who happens to be a serial killer who murdered his victims based on their fears. Suggestions say that he's dead now, but our lead is so disturbed about what his dad is, he himself is in risk of snapping out crazy and might end up be the killer who'll soon starts murdering the casts after the hour mark. But then again, we also have a disturbingly (and suspiciously) life-sized wooden mannequin named Morty, who looks close enough to being alive. If you know your clichés, or loves spoiling yourself with spoilers, then you wouldn't be surprised that it is...

Being made under the success of post-Scream teen slashers, Halloween Night is closer to a dead teenager bodycount flick than its predecessor and yet it fails to be anymore exciting. Even if we do treat this film as a story standing on its own footing, it's hardly a decent watch as a lot of mumbo-jumbo about phobias and Native American rituals get tossed around but it never led to anything but lame teen talk. It strolls along like this in a lovely sluggish pace until Halloween night finally comes and the teens start to drop dead. Unfortunately, even at that the film hardly broke its blandness streak; the kills are tame and occur mostly off-camera, and a lot of uninteresting survivors walked the ordeal off in the end.

The biggest complain I have with this movie, however, is that it never utilized its villain's full potential. Halloween Night tries to play around suggesting our troubled lead is the killer; sadly, this mystery isn't done well, so the revelation of a talking wooden totem isn't much of a shock. (Or maybe it is depending on how much of a newbie you are when it comes to these kind of flicks. If you are, then you got a long way to go, buddy...) When Morty begins his killings, he stays with his MO of using fears to do murder, something that has its moments despite its cheesiness, but it's overall underused with so little victims and overly simplistic fears to exploit.

There's nothing to recommend about this movie save Friday the 13th's Betsy Palmer appearing as a kind ole' granny (the one you could hug and feel warm about without the risk of getting a knife in your back), so if you're browsing the stalls of your favorite video shop and/or rentals and sees this title, please take notice of the amount of dust and cobwebs hanging all over it. It's there for a good reason...

Bodycount:
1 female hacked with an axe
1 female hacked to death with an axe
1 male bucked on the head by a horse
1 snake decapitated with a switchblade
1 female found slaughtered inside a box
1 male thrown through a window, falls to his death
1 female had her head smashed against and drowned in a toilet
1 male attacked by rats
1 female immolated in a car explosion
Total: 9﻿﻿﻿﻿﻿﻿