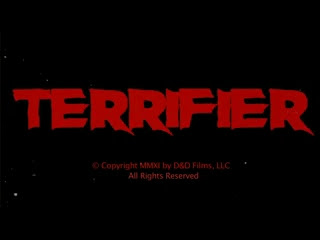 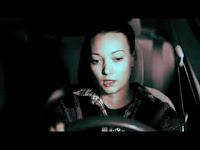 Director and Special effects wiz Damien Leone whips up this demented slasher/horror movie about a lone woman witnessing a brutal murder during one Halloween night, and finds herself being hunted down by demonic looking clown responsible for it.

The story never strays anything more than that, but the execution of the film is anything but bland. 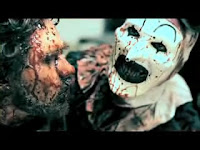 While the premises is a basic set-up for a slasher movie, the story progresses with much twist and turns that slowly degrade into something rather off-putting, and this isn't just because it's very brutal and gory, but direction of the film taps into nightmare logic, wherein anything terrifying can happen and all for little or no reason at all, and it's effectively gripping. Clearly, there's no indication to what's after our lead, but who or whatever the clown is, he's not gonna stay down and let this girl live. This nihilistic and hopeless tone definitely helps bring the terror in Terrifier.

With well-acted roles and realistic gore added along the lines, this twenty minute short becomes a must-watch that I'm proud to have seen and recommend. Especially when Halloween's around the corner...

Bodycount:
1 male dismembered with hacksaw
1 female found with missing hands and her face beaten flat against steering wheel
1 male shot on the head
total: 3
Posted by Kaijinu at 7:08 PM