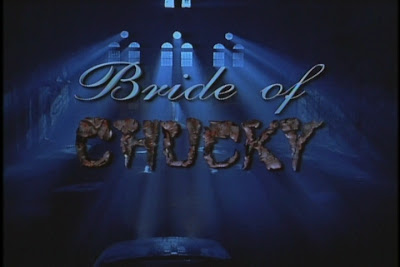 Okay, now. How on earth are we going to follow-up a movie about a killer doll who, last time we've seen, ended up in bite-sized pieces through a fun park turbine? Especially in the decade when Scream labored itself into influencing meta-humor to nearly loads of imitators? Easy, drop the horror and embrace the humor! Hurray?

After retrieving his pieces from a police evidence locker, moonlighting serial killer-slash-goth chick Tiffany brings slasher doll Chucky back to life (through a Voodoo for Dummies book, no less) in hopes of rekindling her relationship with her now pint-sized boyfriend. Been wondering what took her so long, though...

Chucky, however, reveals to Tif that he held no true commitment, saddening her into locking him up in a baby's crib until she figures out what to do with him. All the while, we have a pair of star-struck lovers, Jesse and Jade, trying to find a way to be together without having the girl's oppressive police father and his cohorts coming between them.

Sometime after his revival, Chucky finally breaks out and got even with his lover by murdering and transferring her soul to a doll she bought for him as a joke. Now a reanimated doll herself, Tifanny has no choice but to help Chucky get to an amulet he wore during the night he got killed (I'm sure he wasn't, but for the sake of this story, I'll just pretend he did) in order for him to transfer their souls to fresh human bodies. And just so in luck, Tiffany's neighbor with one of the runaway teen lovers and by using her charm and wit, she have Jesse deliver them to the town where Chucky's real body is buried ala road trip, with the promise of a big pay. Seeing this as a way to finally escape those who're against them, Jesse musters the strength to take Jade away with him and marry her. Things definitely go for worse for them, however, as Chucky and Tiffany's impulsive killing spree leaves a trail of bizarre accidents and deaths wherever they go, and the teens are in it for the blame!

Before I go further, let me be brutally honest here; I don't mind the sudden shift of tone. This appear to be the common complain every fan of the series point out and I understand as the first trilogy definitely played itself out as a serious horror and all. Still, I can't help but loving this change. I have a very distinct taste for comedy and I usually don't mind some films trading horror for that so long as it works. Bride of Chucky tries this and ends up as a screwball, road movie comedy with a Bonnie and Clyde like situation, parodying romantic chick flicks with witty references to other movies, may it be horror or not (but mostly horror), and still delivering the grue.

In fact, it all eventually leads down to just enjoying Chucky do what he does best, only this time he comes with a partner or, rather, soon to be wife. Since Chuck's the main star of this movie, Bride toys around with his personality and see what they can do if they put him in a situation we normally don't see a slasher get in. For this case, being with an equally homicidal and yet sweet slasherette who's reduced to the same dolled-up plastic situation as he is right now. The interactions were rather amusing as the two are completely in contrast with each other in terms of maniacal style and yet they managed to do their murdering gigs in tandem. Plus doll sex. Clearly, that is a first! Brad Dourif reprises his role as Chucky and with Jennifer Tilly doing an outstanding job acting and voicing her character, Tiffany, the duo is definitely one of the best slasher pair (if not the first) to be ever conceived.

The rest of the cast were pretty likable, if not too shallow. Jesse and Jade (Nick Stabile and Katherine Heigl respectively) are easy to relate to, though it is noticeable that not much casts were thrown in to divert our attention from them, or our killer dolls. These two "side leads" show Bride of Chucky's own brand of utilizing teen TV stars as lead roles, only unlike most other dead teen flick that came prior to Bride's release, the multitude of victims here were more of random bypassers and cohorts that just in the way, dying in ways bloodier and gorier than your average 90s slasher. It's a blessing and another good reason to actually like Bride of Chucky, as our star killers got more creative with their murders. (One of which is a nod to a certain cenobite that we all know and love)

Though not entirely perfect, Bride's a welcome game changer for our diminutive slasher as he stepped into the new age. Yes, there are times when the jokes fall flat,and, yes, I am aware this makes Chucky less threatening and more humorous (despite the updated gothic Frankenstein look), but as long as blood flows the right way and the wit and nods are fresh enough to outlook any flaws, then make mine Bride of Chucky!

Bodycount:
1 male had his throat cut with kitchen knife
1 male smothered with pillow
1 female electrocuted in a bathtub with a live TV
1 male gets flying nails to the face, later knifed to death
1 male immolated in car explosion
1 male and 1 female impaled and dismembered by falling mirror shards
1 male ran over by truck
1 male and 1 female seen shot on the head
1 male shot on the head
1 male mauled (?)
Total: 12