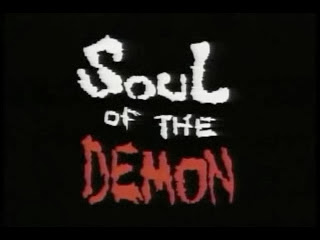 Not gonna lie, this definitely another cheap home-made horror movie and that's a probable reason why not a lot really bothered with this, but comparing it with most of the cheap shot-on-video releases we have these days, Soul of the Demon (1991) has a lot more entertaining effort for our viewing pleasure.

Soul of the Demon starts off with a young boy and his friend uncovering a mysterious box near a stream and finds a strange looking totem inside it. An old preacher suddenly approaches them and warns that a powerful demon is actually trapped inside the totem, demanding the two to put it back. But seeing these kids knew better, and that the old man disappears no sooner after he appeared to them, one of the boys takes the totem home and research about it with a book he found in his local library. (Actually just an hand-made Evil Dead prop with leather covers)

Being Halloween night later that evening, the boy's older brother decided to hang out with his friends at a supposed haunted house after one of them mistakenly announced a party, improvising with babes, beer and a fake seance inspired by his little brother's find. By doing so, they unknowingly invoked the totem's trapped demon and it manages to possess the kid, starting a gory killing spree only a demonic middle-schooler can dish out at them one by one.

Although described as a clone for the late 80s cult classic Night of the Demons, Soul of the Demon is best described as a 90s time-capsule where everyone had big hair, dresses up in brightly colored get-up and talks in stoner lingo. It's no different from those late 80s and early 90s do-it-yourself horror flicks circulating in those years' rentals, showing all the guilty nicks such as some hammy acting made funny by a cheesy script, semi-cheap make-up and all the simplistic plotting you can find in a B-grade flick, with added tributes to gore classics such as Lucio Fulci's Zombi 2 and Sam Raimi's The Evil Dead. Still, I'm not passing this film without a good reason and there's plenty to go around.

As low as its budget looked, Soul of the Demon makes a fun rental with its impressive looking gore and special effects, and an acceptable so-bad-its-good production. The kill count isn't entirely monstrous in number, but it's modest enough to give us good and gory eye-candies like a gratuitous panty shot before she gets eviscerated with a levitating wood-saw, plus a couple of nice body splittings and an exploding head. It also has some playful looking cinematography and candy-colored lighting to give much more retro-feel to it, as well as some really old-fashioned yet well-animated cartoon ghosts that really puts this title a bit higher in the effort scale than its home-made kins. Strangely enough, there's no nudity here, but I guess you can't win it all.

A bit of a rare gem that really deserves a look if you can snag a copy, Soul of The Demon (1991) is a good addition to any Halloween rentals and a keeper if you like your horror/slasher flicks cheap, fun and explicitly gory. If Night of the Demons could get any gorier, this is probably the closest you can get. That, or you could rent the underrated 2009 remake of that film. Whichever want you choose!