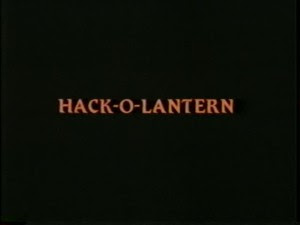 Tis' the Dark Holidays once again and it's a usual tradition for us to celebrate it with skulls, candies and... Satanists who does the international love sign? Oooh, boy, this is gonna be a long night...

Tommy Drindel is a shut-in outcast with a love for Rock-and-roll. He lost his dad in an fiery car explosion when he was just a wee lad, apparently the doing of his Satanist-warlock grandfather who once raped his own daughter (AKA Tommy's mum, making him the kid's dad AND grampa) one Halloween night years ago. 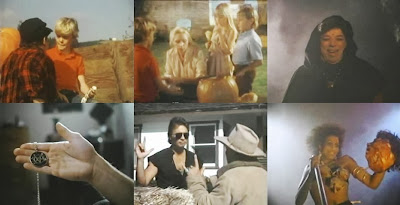 Now as a grown teenager, Tommy is visited once again by Grampa with promises of great power this Halloween night through a ritual welcoming him to the great bosoms of Satan himself. However, mum (and Tommy's cop brother) is doing her best to change her rockster son's lifestyle and choice, but some sinister force is out there in a cloak and mask is hacking down friends, family and other random people Tommy encounters. Could it be Tommy himself embracing his destiny? Or is it Grampa? Or could it be even Satan himself?!

Hack-O-Lantern is that one kind of slasher film I usually try to avoid; the one that does nothing to improve the sub-genre and is tacky all over the place, may it be acting, production value or direction. But it does have a level of charm that got me watching it through and through, probably because it's so darn bad, it's laughable.

Mixing Rock-and-roll, Satanism and slasher tropes, Hack-o-Lantern stands out among other horror films that does this approach with its high level of cheddar-rich corniness and obscurely random scenes. One example would be a random music video that appears as Tommy's ominous "nightmare" with three minutes of head-banging heavy metal, demonic babes in thorny bikinis that shoots lasers out of their eyes, and one impossible beheading involving a trident. Then there's also that one scene in the middle of the film that involves one guy doing the lamest stand-up jokes I've seen, that does absolutely nothing for the plot other than to fill up some running time.

For real, if you're brave or curious, watch this film and fast forward to the part where the town hold its Halloween costume party. This guy just walks out of nowhere and starts telling jokes for no God-forsaken reason!

The outrageousness doesn't even stop there; littered with casts that overact their roles, one Hy Pyke (of Bladerunner, albeit a small role) took the biggest slice of this pie as the evil Grampa who lives a rather obvious life as a Satanic leader of a cult who doesn't know the difference between Devil Horns from that of a "Love" hand sign. (This has to be the most inept evil cult for that matter) Pyke's character talks in this "evil" tone, looks at everyone with constipated eyes and cackles at every end of his sentence; clearly, this guy's so proud of his evil religion, he's making no effort to hide it at all!

Tommy, on the other hand is supposed to be a troubled "youth" but the guy playing him, TV's Gregory Scott Cummins, looks too old to be playing a dude who's supposed to be in his 20s. At least he tries to act young, I mean who else would mistake his sister's love-making as a cry of pain and help? Clearly someone as dumb or naive as this guy!

Everything else is routine as a slasher; T&A is high as almost every lady that shows up in this pic either bared a bosom, an arse, or both. We got one soapy bubble bath, one going full frontal as "Lady Godiva", and another for a branding scene which I believe served no other purpose but for sleaze. Gore didn't do much here; so far I only counted two or three brightly red kills but the rest were pretty dry, done by a killer that's hardly convincing at all. Heck, I don't even understand what this guy's get-up is supposed to be! So far, I believe it's a demon but it's too darn elaborate (as in averagely plain) to figure out. The party scenes have their silly moments, but it all trails to a rather predictable end that's entirely open for a sequel which will not come to a reality.

It's a rather low entry for a holiday slasher but it ain't all that bad. It's unintentionally funny, silly beyond believable, and overall hammier than pineapple holiday ham! If you're up for some really cheesy horror flick that you could mock up, then get out there and get hacking with Hack-O-Lantern. Hack-O-Lantern. Even the title alone reeks strong dairy...

Bodycount:
1 male brained with hammer, set ablaze
3 males and 1 female disintegrated with laser (dream)
1 male decapitated with pitchfork (dream)
1 female gets a pitchfork to the head
1 male had his head split open with shovel
1 female knifed on the back
1 female garroted with rope
1 male axed on the gut, falls to his death
1 female shot
Total: 12﻿
Posted by Kaijinu at 1:28 PM