The Seed of Bloodshed: Night of The Scarecrow (1995) 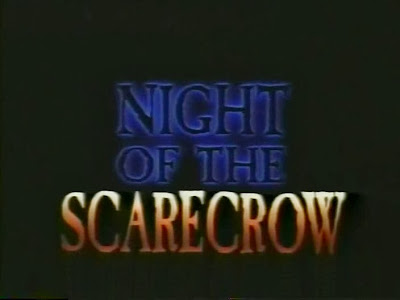 In his way is the town mayor's estranged daughter Claire, who began to notice these mysterious deaths and later discovers the town's little secrets, and too one possible way to stop the maniacal husk-man...

A directorial feature coming from Jeff Burr, the man who brought you sequel films like The Stepfather 2, Pumpkinhead 2: Blood Wings, and Full Moon's Puppet Master 4 and 5, Night of the Scarecrow is as basic as any killer-driven horror film there is, focusing on the vengeful exploits of the monster while his intended targets try their best to understand what's going on and not die. (most of them failed to do the latter)

to It's not a bad effort to begin with, just that it's something we'd seen a lot before. More or less, if you'd seen Freddy Krueger came back from the grave more than one time, plotting vengeance to those who put him off his game in one grisly way to die to the next, then expect the same storyline from one of those sequels in this one, only less cheesy one-liners and more harvest related kills.

Acting around this movie is pretty fair with the list of rather familiar casts; We got 2001: A Space Oddesy's Gary Lockwood as the town mayor, Chinatown (1974)'s Bruce Glover as a priest who knows a lot of the town's secrets and even Dirk Blocker of Poltergeist as an ill-fated farmer. Standing in as our lead heroine is one TV star Elizabeth Barondes, who some of you may remember was Lucy Lane in the Lois and Clark TV series back in the 90s, based on the DC hero Superman. Not much to argue on her part, she did a pretty swell job as an amalgam of a tough, butt-kicker and a next door sweetheart kind of girl. The only thing that got me thinking is that she seems to digested the idea of a killer scarecrow quite easily without much skepticism. I mean, sure one guy got half of his body eaten by a corn thresher, another were torn to pieces and one girl just disappeared under the earth, but couldn't all this be the work of just a simple madman? As in "flesh and blood with no supernatural powers" kind of madman? I guess seeing a pastor with his mouth sewn shut with vines was enough proof of an evil scarecrow warlock rampaging the town. Or is it? Eitherways, the movie is quick in pacing, the characters were hardly unlikable (they're just simply..."there"), and the gory killings were fun, so I think I can overlook this or any other small flaws.

Being released a year before Scream hits the big screen and re-introduced slashers with teen TV stars as victims, and too the fact that it's a direct-to-video feature, Night of the Scarecrow becomes an obscure late 90s slash-fest that really deserves a good viewing. Not that it did anything a supernatural slasher flick hadn't done yet, but as familiarity is concerned, it's a good film that goes great with freshly popped popcorn and a cold fizzy soda in a lazy weekend night. Worth a catch.

Bodycount:
1 male shredded by corn thresher
1 female had vines broke out of her body, buried alive
1 male killed offscreen, mentioned torn to pieces
1 male crucified and left for dead (flashback)
1 male pinned to the wall with swords, had husks broke out of his body
1 female found stabbed on the face with knitting needles
1 male killed, method not seen
1 male hacked with sickle
1 male slashed open with sickle
1 male gets stabbed on the face with supernaturally blown needles
total: 10
Posted by Kaijinu at 11:47 AM