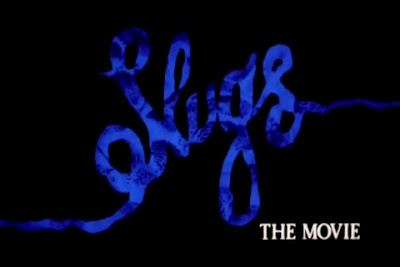 From Juan Piquer Simon, the brain who brought you Pieces (1982), the cheddariest slasher to come out from Spain, comes a motion picture so grueling, so disgusting, so insane, it's perfect for Halloween Night!

Since it's also taking place in Halloween... I think...

Slugs the Movie tells the story of a small town's sudden problem with a horde of slugs invading their gardens. (And their toilets. And their lake) But these are not just any ordinary slugs; they're as big as bananas, have rows of pointy teeth, and they're hungry for flesh. Ever since they arrived, several people are either attacked and munched on by these tiny terrors, or had succumbed to a strange infection which involve flukes bursting out of their heads.

In a race against time, a health department worker, Mike Brady, tries to uncover the origins of these mutant slugs with the help of his biologist buddy (who claims to be an expert on these things and believes slugs naturally have teeth. Yeah, which university did you graduated from again?) and some guy who tends the town's sewers wearing a jersey. They soon discover that the slugs have been breeding under a toxic dump and are outnumbering the townsfolk, leading to certain doom unless they find a way to destroy them.

Oh, and Halloween night's coming so teens are bound to be killed as well. Not that it adds up to anything but let's just humor the fact.

Made to gross out with slime, grime and gore, Slugs: The Movie is a late 80s creature feature with a lot of cheesy moments, implausible biology lessons and a lot of slug attacks. While the plot itself is stretched beyond belief and is understandably laughable, the movie's serious attempt to be, well, "serious" puts it high on the cheese-o-meter that it actually becomes a pretty darn decent ride. High on the bodycount and horrifyingly gory, Slugs showcase the slimiest skin-crawling kills there is in a semi-slasher-cum-creature film featuring killer invertebrates; we get some dumb teens thrown into the feeding frenzy whilst having sex. Real gross stuff and sleazily gratuitous as both the gal and guy gets covered by giant slugs and pools in their own blood. Other highlights include one business meeting-turned-nightmare as a yuppie who previously ate a soup unknowingly swimming with slug remains, gets a nasty case of the nose bleed as he ends up infected with parasites that can induce face bursting.

Interestingly, the cast of older generation characters are quite multi-dimensional and stands above the unlucky teens (and a few other "present-as-victim" casts); they're fairly acted albeit the hammy script and direction, which adds another factor why its Slugs is so fun. Add along a random holiday placement that doesn't do much to elevate the story and countless explosions that seem to be quite unnecessary for a movie where its greatest foe is a swarm of killer slugs multiplying in the sewage system, and you'll have yourself a B-movie best remembered for its high-stake campiness. (I mean seriously? Why not just salt the whole drainage system? I mean sure you could blow them all up in a fiery blaze of glory, but why damage property if you could just fizz these babies up with salt water?)

The only fault I see here is that there are moments where it drags around with a few people just discussing about the danger. Whether it's believable or not, they're mostly jabbering about things that are either painfully obvious or is plain ludicrous that it's kinda boring. Thankfully, the slug scenes are really worth it, especially since there's so darn plenty of them. (Both the number of scenes in the movie and the number of slug props itself)

The late Juan Piquer Simon has definitely made another cult classic here; I could dare say that it's in the same level of recognition of his chainsaw-themed slasher Pieces among horror fans, but whatever you make out of it, Slugs: The Movie is a fun watch for those looking for finer gross-out moments and more obscure critters as a villain stand-in!