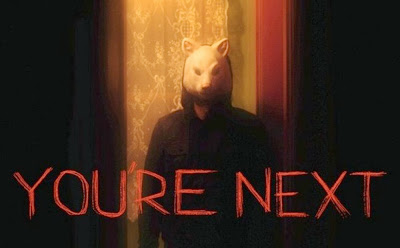 There's hype. And then there's Hype!

With 2013 nearing its end, slasher films are seem to be running on a low streak when it comes to wowing its crowd. The cheesy sequeloid known as Texas Chainsaw 3D turned out to be a mixed cow, No One Lives ended up a drag, The Purge was overblown, Hatchet 3 was okay but missing a lot, and I am yet to see Curse of Chucky as I write this. I'm pretty sure I've seen plenty of other titles under this year and there many more that I'm dying just to get (Billy Club, Don't Go to The Reunion and Bloody Homecoming among many), but I'm focusing more on big budget titles that'll really stick to my noggin.

This is when I turn my attention to the long awaited home invasion slasher known simply as "You're Next"; supposedly released in 2011 via festivals, the film was shelved for quite some time, only to be released theatrically just this year. I waited long enough to see whether the praises this film was getting were well-deserved or not and for all franks and popcorns I can eat, I can say that, indeed, there is something rather special about this film.


You're Next starts off with an obscured love-making couple getting murdered as soon as they finish by who appears to be a machete-wielding maniac. We then cut to one Crispian Davidson taking his new girlfriend Erin to meet his loaded yet highly dysfunctional family at a getaway country mansion where his parents are celebrating their wedding anniversary. Things are tense and jittery all through out with bad blood getting between brothers, Erin trying to fit in with her boyfriend's family (she is an Australian in a house full of Americans), and weird noises coming from upstairs freaking mum out. But as far family matters go, this is nothing compared to the shitstorm that's about to happen.

Once they settle in for the big dinner, a trio of masked intruders, armed to the teeth and hellbent on murder, simply shows up and begins killing them one by one in a seemingly meaningless slaughter. But what these killers don't know is that one of their intended targets has a secret of her own. Something that would actually put a deadly turn against them...

I have to give a big thumbs up for Adam Wingard, the director and editor behind this flick; the last works I've seen from him were his first feature, the splat-tastic yet flawed slasher flick Home Sick featuring Bill Moseley, and the strangely hypnotic serial killer/thriller A Horrible Way to Die. You're Next may not raise the bar any higher in terms of story as its really nothing more than just a slasherfied version of a home invasion thriller done dozens of times before with the likes of movies such as 2007's French Extreme Inside or even Spain's 2010 release Kidnapped (more or less the latter), but what the film did right is that it knew how to keep the ball rolling once shit finally hits the fan and doesn't let up with the bloodwork along the way.

Some witty script and stylized camera work improve the entertainment value of the movie, showing some thought in actually making the characters and the situation they're in more engaging. From time to time, the film shifts tones from seriously traumatizing to sly and cynical, toying with our heads to where exactly this film is going. Eventually, we get enough turns that got us diving into new suspects, unexpected developments and, yes, more bodycount.

What's more refreshing here is the characterization of this film's obvious final girl; undergoing a survivalist camp by a paranoid father back in Australia, Sharni Vinson plays Erin as a quick thinking and really hardcore gal that isn't afraid to shed some blood to protect herself and what remains of her boyfriend's family. While majority of the cast got killed off screaming and panicking, she's there to be graceful under pressure, setting up traps to disarm, distract and destroy!

The villains themselves are also really cool and intimidating with their black squad gear and merciless determination to simply kill everyone they can catch. (Which apparently include Ti West as one of the brothers. That'll teach you to waste our time with that "short film" Miscarriage in ABCs of Death! (2013)) Who they are and why they're doing this call for spoilers, but for most of their running time onscreen, their bloodshed works as fine as the creepy animal masks they're wearing.

Some wouldn't get it, but You're Next is perhaps the next best thing there is in profiling home invasion flicks, after the rather disappointing outcome of the misdirected The Purge. Yes it is clichéd and lacking any real story apart from murder, mayhem and masquerades (both literal and figuratively), but for the right audience and for the right time, it's definitely a worthwhile slaughter flick for fans alike to enjoy.