How To Be A Slasher: Behind The Mask: The Rise of Leslie Vernon (2006) 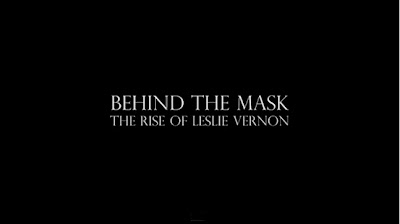 Not since Wes Craven's Scream brought the slasher genre to the realm of self-awareness with countless imitations raiding the 90s, the cult classic sophistication known as Behind The Mask: The Rise of Leslie Vernon gave this self-deconstruction a whole new twist: we actually get to see our bad guy's point of view on it!

With the film being one part mockumentary and one part straight slasher, the first half of Behind The Mask tells the story of a three-person documentary group interviewing a charming yet eccentric man known as Leslie, who willingly and openly shares with them his dreams of becoming the next serial slasher, simple tricks to create the many onscreen clichés we got used to (like how doors close by themselves for false scares or planting creepy newspaper clipping for red herrings), as well as his knowledge on character stereotyping and how it usually plans out. (As in how they usually go into the dark and creepy basement with a date just to get scored, or how the final girl is always a virgin)

Things start off real simple and harmless, with Leslie being an overall great guy despite being weird, but the more they near the night of his supposed killing spree finally happens, the more they realize that cannot just ignore his willingness to murder innocent people. As soon as the big night falls, Leslie brandishes his sickle and dons the mask, our crew has a choice to turn tail or die saving these kids.

Full of wit and humor, Behind the Mask is a clever look into what could be regarded as the behind-the-scenes of murder sprees that takes place in a world where villains like Freddy Krueger, Jason Voorhees, and Michael Myers exist and terrorized more than once. It seems that hacking up teenagers in a systematized fashion is an underground fad that people like Leslie can secretly take part of and become one of the best in the "business", which is quite a funny thing seeing many of our aspiring killer's tool of the trades are simple everyday things an individual can grab hold to, or something we can actually do. The closing door jump scare I mentioned earlier? A simple brick tied to a rope! How does a slow-moving killer keep up with his victims? Simple exercise and a healthy living! Killer survives a fatal blow of an axe? Probably because he loosened the axe head before the night even began! Yes, in this movie, the slasher world is full of cheats, but one cannot argue with the execution of the process if it gives workable results!

Perhaps the only thing Behind the Mask never really addressed was why our crew decided to film this project in the first place; we simply start in media res of their project, following altogether our hapless group as they document the rather charming presence of Nathan Baesel's everyday-looking character with a penchant and pride for serial killing.

Due to this, our titular rising killer, Leslie Vernon, is just an interesting take on a villain; his aspiration to be one of the top is engaging, motivating and somehow a little bit human in a sense that we actually get to see his reasoning and his longing for company, hence his warm and lively approach to his documenters despite the fact, as a slasher, he is bound by the unforseen rule to murder these people, thus we cannot really trust him all in all. On the other side of coin, Angela Goethals plays Taylor Gentry, the aspiring interviewer who first found Leslie's dream of murder to be intriguing but soon sees it as something she must intervene on. We follow her as much as we did with Leslie and Goethals played this character with much growth and concern that in the near end, we can't help but root for her.

The last third of the movie is where it takes an amazing turn; rules are changed, twists are made, and we all get to see it on a third person's perspective; people are finally getting picked off  one by one and Leslie's doing it with style and blood to keep a true fan happy.

And speaking of the fandoms, Behind the Mask also littered its little world with more horror movie tributes than you can shake a stick at. Cameos including The Poltergeist's late Zelda Rubinstein as a librarian who knows a thing or two about the Leslie legend, and Robert Englund, Freddy Krueger himself, as a Dr. Loomis-esque hunter of evil who appears to see past Leslie's delusions and is somehow aware of what's going on between our hapless filmmakers. Apart from simple mentions, we also have little winks and nods to films like Halloween (Rabbit in Red Lounge), The Shining (some of the character's name), Pet Sematary (Leslie's pet turtles) and even Hellraiser. (The Lament Configuration)

Some may find it talky, others would disapprove of its self-referencing as a tiring and overused cliché to post-modern slasher films, but in a matter of taste, Behind the Mask is something worth trying. If you're looking for that one smart, fresh and funny slasher film to enjoy for that one rainy night, then look no further, Leslie's coming for you! Anybody else, here's a bottle of Stay Awake...