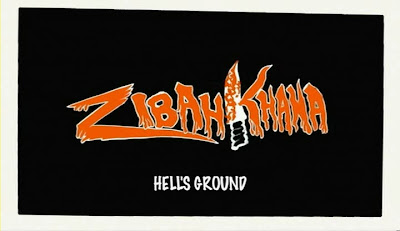 Well, not exactly the kind of zombie/slasher hybrid I was expecting. Can't blame them for trying, though.

Five teens decided to ditch school in order to watch a concert, completely unaware that an unknown disease had tainted another town's water supply, eventually zombifying its residents into cannibal flesh eaters. After going through a detour in hopes of reaching the concert on time, the teens encounter and gets attacked by these zombies, forcing them to go back to the road when one of them gets bitten and in need of a hospital. But as night falls, the group gets lost and encounters another set of monsters...

Foreign slasher films can be tricky as what might be gory for one country may not be the same for another. Marketed as Pakistan's first gore film, Zibahkhana, or Hell's Ground, is a slasher movie that has The Texas Chainsaw Massacre (1974) pulsating through its plot, with a little something extra that tries to be everything we love about Western horror only to come out as a rather average and somewhat misleading portrayal.

For starters, the claim that the film is "Texas Chainsaw meets Dawn of the Dead" had me thinking we're going to have zombies and psychos clashing for the kill count. That didn't happen. Instead, what we have here is a build-up for a possible outbreak from the very beginning of the film (with news clippings and some shots of a town being contained) only to have around ten or fifteen of these dead guys lumbering around, attacking our van-riding group and eating random victims that have no connection with our characters. All of this happening in the span of five minutes or so in the middle of the entire movie. This here's a 77 minute horror film, so after we see the oatmeal-faced zombies, they were barely (or, never) mentioned and seen again, so they're more of an equivalent of a walk-in monster cameo than an actual plot set-piece. (the movie could had gone through without them to be honest)

Misleading zombie hybriding aside, the third act of the film is where it became a full re-telling of Hooper's Texas Chainsaw Massacre, from the crazy hitchhiker scene to a deranged family selling murdered victims as "goat" meat, with some elements of Psycho (1960) and some Pakistani concepts of religion and healers.  While not as gory as it make itself sound to be (only one or two kills deliver the splatter), the murders here are creative enough to be enjoyed by a seasoned slasher fan, with the killer committing them (a Pakistani Leatherface equivalent labeled as "Burqua Man") looking rather cool with his face obscured by a woman's garment that makes him look like a pre-hockey mask Jason Voorhees.

The film is quite steady on its pacing and it really took a lot of time and filler before some real action happens, with a direction that seems to be juggling two horror sub-genres one at a time. The result is a half-half movie that doesn't quite deliver much of the scare factor, but instead shows a bit of cheesy low-budgetary mostly found in B-flicks.

Perhaps I'm asking for too much but, or maybe I just didn't get it, but I can't really give Zibahkhana a low score; the concept is good and I love the dedication the cast and crew put into this film despite it being trashy, micro-budgeted and somewhat lacking a foot to stand on its own. It does manage to entertain and gives some new perspectives for a slasher film in terms of culture and energy, so it's a keeper in my book, as another certified foreign guilty pleasure of mine next to Russia's Trackman (nothing's gonna change that!)

While far from the next great zombie/slasher hybrid I'm looking for (A little higher than Zombie Child (1977), but nowhere as high as Trailer Park of Terror and the outstanding Dead Snow of Norway), but for those who wanted to try a Ladoo version of a dirty, gritty slasher, Zibahkhana is the path for you!
Bodycount:
1 male beaten with shovel, meat hook to the chest
4 males found disemboweled and cannibalized
1 male head found
1 male stabbed to death with machete
3 males and 1 female found dead
1 male hit on the head with morning star
1 male corpse found
1 male ran over by van, dies
1 female had her neck broken
1 male brained to death with rock, stabbed with a morning star's handle
1 male succumbs to infection
1 female killed offcamera
total: 18
Posted by Kaijinu at 6:13 PM