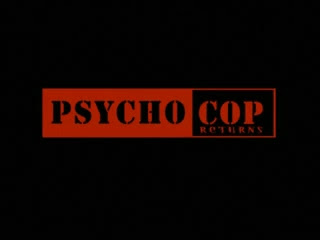 Wow. Just, wow. I never knew I'll survive through this one and actually enjoy it. I must be getting nuttier...

Opening at a diner, two office co-workers are discussing their secret bachelor party blow-out after office hours with the main party planner bribing the guard to let them stay overnight with the hookers he hired. But their confiding is heard, nonetheless, by a man in blue uniform, dark shades and a sinister smile.

As night comes, these hard-partying fellas go on with their business drinking, fucking and enjoying their titty dances, unknown to them that a man named Joe Vickers, AKA Psycho Cop! The Satanist serial killer in a police's uniform (previously impaled through the chest with a spear. Obviously surviving it somehow) had already broken into their building and plans a little party of his own. A hunting party. And they're the prey!

While the first Psycho Cop is a backwoods teen slasher involving a group of big-haired guys and gals enjoying themselves in a cabin deep in the woods, only to be stalked and killed by a horrendously scripted, one-liner spewing spawn of Satan that actually lead to nowhere but cliché-town, Psycho Cop Returns is something a lot more welcome in my book. The flaw of the first movie is that it tried to focus on being a straight slasher with cheesy hookums with very little to offer back and a lot of material that just doesn't work. (As in Psycho Cop's lame and unrelated one-liners); in Return, the story is more interesting as the teens are replaced with working class adults and the premise takes place in an office afterhours, featuring more brutal and satisfying murders under a tone more open as a horror-comedy.

It becomes a real treat for me and I'm proud to say that this sequel's quite underrated. The story's nothing really complicated but there's a sense of direction and flow that made it quite watchable despite having a trail of cheese in its scripting. The characters here, while most are just plain meat for the count, are likable as they do show a bit more humor than the cardboard teens from the original, something worth seeing before they actually get killed off.

Even the psycho himself is an improvement; yes, he's still spewing one-liners now and then, but he seems to be more focused and serious with his spree here than just some random loon killing everyone like a walkthrough, yakking to himself these atrocious banters. He plays around with his victims first, which is a real tension bringer, but once he strikes, his kills would come in with much manic energy despite being simple in execution.

Also comparable here is the amount of exploitative and gratuitous nudity; with all the booze, drugs and a trio of strippers, you can't expect the film to be without any form of sexual gratification (and not the kind that just cuts away in twenty seconds in most horror films), as the first half of the film is definitely foreplay in a literal sense, making up of strippers stripping, supply room trysting and boobs. Lots of boobs.

The gore effects is still shoddy, but I don't mind the flaw if it does what it's supposed to do and I have fun. We have splattery gunshots, vicious pencil stabbings, a bunch of people being thrown off their deaths, a lot cooler for me due to, again, the worthwhile build-up. The killer himself is not free from the blood-letting either, as he's subjected to various hackings, shootings and even being thrown off the elevator shaft himself, but as any invincible man of exaggerated psychosis, he just gets back up, giggling and killing.

Not a real winner all throughout, as the supposed bad taste would come off as immature and desperate for many, but as a braindead slasher movie made for those who can switch off and have a good time, Psycho Cop Returns is a return worth waiting for!