Ladies and Gentlemen, welcome to another episode of 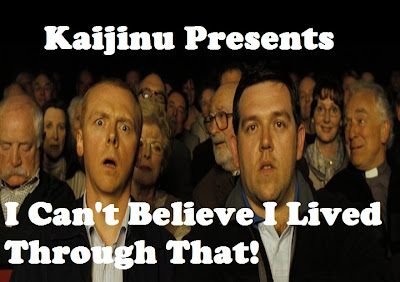 In this entre', we present to you one of the most dreadful "80s slasher throwback" of our decade; a steaming pile of bile that had the audacity to call its killer a "new face of horror". Boils and Ghouls, this is... 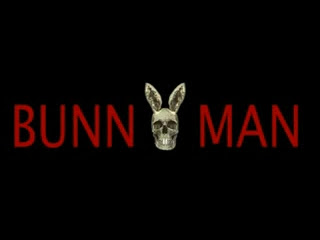 Would you really think a movie about a giant bunny mascot wielding a chainsaw is scary? I mean, yeah, it would be creepy if you're alone at the night with that wanker staring right at you at the other end of the tunnel or through your window. Any window. But have it in the desert/backwoods, riding a worn-out truck in broad daylight? Yeah, it's not scary. Just plain weird. Not that it helps, of course.

Bunnyman tries its luck to wow us with its own brand of uniqueness by featuring a killer wearing a large dirty rabbit suit that was supposed to give even furries the willies. Thing is, however, it's been done; not all the time, but we have our early swings to this gimmick. In fact, let me list down some films in this fair sub-genre that already done this: Girls Nite Out, a movie in the 80s who might be the earliest to sport a furry-suited killer, the low-budget slasher-musical (and guilty pleasure of mine) Splatter Disco (bit of a spoiler for that one), the similarly-themed-yet-still-horrible Serial Rabbit and my favorite rare Ozploitation title The Director's Cut, perhaps the only slasher film for me to pull off the killer mascot motif and make it work.
Bunnyman starts with a gritty, footage of what I believe to be one of the titular killer's victims. Escaping capture, she manages to run off from her captor's house only to be stabbed to death by a guy in sunglasses and an ugly hat. One opening credits later, we have yet another Bunnyman victim on the run, this time in the present and unlike the first, she did have the luck on surviving a little longer but gets killed anyway right after we're introduced to our main cast.


A trio of teenage couples are out on a drive and gets harassed by a guy in an old pick-up truck, supposedly like Jeepers Creepers only you can actually tell this psycho heard of something called a speed limit, leaving us with an unimpressive scene where these kids are supposed to be "chased" ala Steven Spielberg's Duel. Believing they can sooth the savage beast with an apology, (for cutting in front of him because he was too slow?) they decided to stop their car and have one of them go out, confront the truck driver that's obviously out to hurt them, and beg to just leave them alone.

Trucker's response: give the girl a broken nose against his truck's door. Yeah, who didn't fucking see that coming?

Obviously rattled, the group decided to wait out on the freak, hoping he'll still leave them alone. Some long, dragging, monumentally, suicide-inducing moments later, the trucker did leave but returns later to crash their car.

With their vehicle broken down, one of them opted to be the heroic mechanic and tries to fix it but gets killed when the mad driver comes back, hitting their ride while he's still underneath it and technically running him over. Now with a dead friend and a dead car, what's left of them are forced to walk out and find some help, wherein they continue to act as cardboard morons with the emotional capability of that of a rusty nail, falling prey to a retard in a big fuzzy suit, wielding a chainsaw. (How they can't outrun him is a big mystery...) 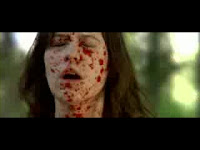 It all leads to familiar territory later on involving some cannibal family living in the woods, Bunnyman is one shitty film with little to no redeeming qualities to satisfy a good slasher fan. The kills are done away with cheap blood splashes just as the killer bunny-freak's about to cut someone, so that's one point down for gore. Now, you still can expect something else to make up for this, right? Nope, the movie failed to do even that! It's devoid of good character build thanks to some really wooden actors and a script that sounds like someone with a 3rd Grade level education had written down. (their friend is dead and they hardly cringed at the matter, even having the audacity to joke around! Plus who goes to a road trip without bringing any food, water or a single phone?! Yeah, none of these morons brought a phone! Who wrote this dreck?!)

Direction is futile with its God-awful pacing and the whole idea of a killer in a bunny suit hardly makes any sense. I mean, this guy's a deformed cannibal, of course I get that, but was there a reason for him to wear the furry costume? Maybe there was and I just missed it during my half-sleep state but you might as well have this guy run around nude cuz it's not doing anything for the story. 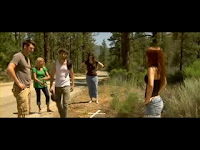 What's even more surprising for me is that this Z-grade garbage actually gathered enough fans to support a sequel; How the fuck did that happened? This is practically a Texas Chainsaw Massacre clone done with almost no budget, weird characters played by bad actors, zero gore shots and a ridiculous concept, but I guess even retarded flicks have their audiences, those who consider it the "so-bad-it's-effin'-funny-good" kind of movies. Whatever it is that these people saw in this bung-hole, I rather not get involved as I would like to end this post with my sanity still intact.

I always say that I appreciate a good effort, and Bunnyman certainly tried, but all these flaws are really distracting and I can't help but trash this movie to the extent that I'm thinking of defecating on it. (Which I won't. I maybe pissed, but I'm not high!) I'm just glad I got mine via stream, saving me the worries of it taking up my good tape spaces! See it if you want. I don't care. It's your rent money you're wasting!