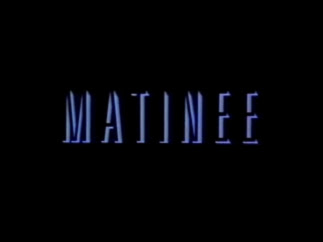 An extremely rare Canadian TV slasher, Matinee had fallen into the cracks of obscurity for a lot of good reasons, most of them pointing to the fact that it's very dull for doing nothing for most of the time other than talk. And talk. And talk. (and very little on the stalk)

Two years ago, a murder occurred during a movie screening in a small town's theatre, with the killer escaping capture. Forwarding into the present, the theatre's up and running again after its hiatus and not all of the townsfolk are happy about it. (Or at least that's what this movie is trying to suggest) To make matters worse, some employees working on said theatre are disappearing and one car was found with its driver dead. Is the killer from long ago back for more? And if they are, who could it be and what's their deal?

With a title like Matinee (or originally Midnight Matinee), you would expect an energetic romp of a slasher that revolves around and/or inside a movie matinee but, in all honesty, it's hardly one. The movie's more of a police procedural than an actual stalk-and-stab dead teenager flick with all the investigative chit-chat here and there, leading to a colossal amount of red herrings, so much so that I wouldn't be surprised if one is confused by the end, tired of playing "policeman" and just end it all by turning off the damn movie. What's worse is that, aside from the graphic opening murder (with was a humble nod to Friday the 13th), the killings here are plain and tame, and the steady pacing of the movie doesn't help elevate them any better.

Highlights for this film are very little, with the climax thankfully getting everything moving again. A tad too late, though, as all possible excitement were drained away by the film's twisted yet empty storyline. I guess you could say that some rarities deserved to be buried and forgotten; unless you want to kill your cat again with your curiosity, I would really suggest stepping away from this title. Slow, dull and undeniably hollow, that's all you need to know.