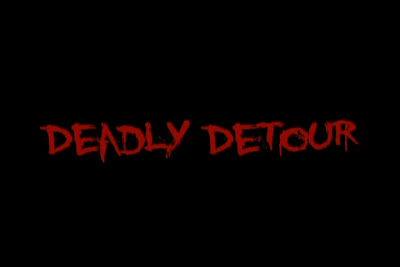 You gotta love the motivation a single handheld camera gives to a group of aspiring (sometimes "wannabe") horror maestros. By the time the late 80s introduced SOV marketing, the horror genre soon became a hot spot for kids with camcorders who wanted to do their own film, a tradition obviously still alive today, kicking and waving in the middle of the road flagging for our attention.

Now the question here is whether the film is worth the stop or we should just ran it over like roadkill; most of the time, it's the latter, but then there are those that make good company in a lonely trip.

Deadly Detour's your average home-made slasher movie, with tons of cheap blood, cheap gore, muffled audio that drops up and down from time to time, bad lighting and weird editing, telling the tale of a group of teens venturing into the woods where they'll be picked off one by one by the "Goatman", who is actually just a deformed guy in overalls and brandishing an assortment of weapons. (mostly a machete) With a plot as basic as the next killer-in-the-backwoods type, what Deadly Detour have that most of these shot-on-video failed to do is that it managed to satisfy all our exploitation needs.

First of is the gore; the guys over Maniac Films (the indie company responsible for this, their feature debut) put a lot of effort of making the nastiest nasty exits as gallons of fake blood and buckets of latex meat get strewn around whenever the killer mutant deformed guy mauls, dismembers, and in one occasion, abort a pregnant lady and strangles her with her own umbilical chord. It's mean-spirited yet imaginative and cheap enough to enjoy.

Lastly, we got the final act that was kinda reminiscent of the same level of taboo-breaking one particular Troma movie did involving massacring children. (Beware: Children at Play (1989) for those who couldn't guess) It was a nasty piece of work, but the fact that it is awful and so darn cheap tones down the bad taste for me, and I just couldn't stop chuckling on how horrid and uncomfortable it was! (See screenshot for some spoilers~!)

Deadly Detour is everything you would expect in a do-it-yourself horror film; the ineptness of the production is ever present but you can easily forgive these shortcomings thanks to its acceptable entertainment value. If you're a grue and gore fan who's easily satisfied with loads of fake blood and double-digit bodycounts, then this movie's a high recommendation for a rental or two! Try it out!