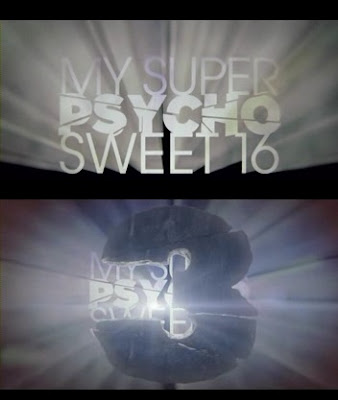 What first started as a successful horror film tie-in to one of MTV's own show "My Super Sweet 16" (where in spoiled brats in their lowest plan their little Sweet 16 birthdays), My Super Psycho Sweet 16 was released in 2008 as a Halloween TV movie and showcased a murderous masked maniac killing annoying teenagers celebrating in a sweet 16 party. The idea was a hit since it sets itself apart from the rest of your average slasher films thanks to great characterization, fluid pacing, awesome kills,and a very engaging drama concerning all three films' protagonist, Skye Rotter (the talented Lauren McKnight) a social outcast who's just begging to break free from her past.

The success of this movie leads to its first sequel two years later, which was more dramatic, focusing a lot on the characters and their ordeal dealing with the aftermath of the first movie, but it almost felt like a re-hashed plot of the original, losing some of its energy by then. It promised more to come with an open ending, so I guess this is where the third film steps in.
Following two years after the previous installment, Skye is heading out﻿ to live in college with her boyfriend and her new bestfriend, hoping to pursue a new life away from her homicidal father's two Sweet 16 Birthdays massacres, and Alex, her estranged sister, whom she hadn't got in touch with since the last time they've met. But halfway out into the road, Alex finally called Skye, asking if they can meet at least one more time before they completely part ways. Discomforted by this sudden approach, Skye nonetheless agrees to visit her and, apparently, celebrate Alex's "Sweet 16". (which is kinda hard to believe as she looked way older than that!)

After being introduced to Alex's own small spoiled posse', Skye tries to mend whatever strayed between them but soon finds out that they are being hunted down by Nathan, Alex's obsessed stalker. Now trapped in a house with a deranged lover, Skye has no choice but to battle another crazed fanatic to survive the night, and too some partially expected surprises awaiting for her...

Finishing the series, this third entry had us looking into a rather predictable revenge plan that those who have seen the previous movie can easily figure out, no matter how much this movie tries to do things a little differently.

With a relatively smaller bodycount than the two movies (the smallest in the series, to be more precise), Psycho Sweet 16 part 3 relied more on building tension and intrigue for its kicks and it works on some level, albeit some might find this a tad overworked seeing the kind of characters present here; while the two main leads are still a good cast, the rest of the characters spent most of their time being a bitch, making a lot of tongue-in-cheek remarks and doing a lot of stupid things which leading them into getting killed. So, with them being practically lambs for slaughters, getting them killed off was rather the only fun thing they did for the movie.

There's a lot of visual styling done for these stalks, which was really impressive despite the TV budget. Much of this leads to a grand finale of a climax, where the perpetrators have their victims set up around a large dinner table ala Happy Birthday to Me while they do a monologue explaining how they do all this. Nothing inspiring, but you got to hand the brutal yet awesome (cat) fight that it all ended up to. It was then and there where we actually get to see Skye's character had grown into a real independent and likable character, with much badass persona perfectly understandable with all the shit she had to go through. Strangely, too, I find the fact that her love interest, Brigg, who have been present in the first two movies was reduced to cameo appearances here to be a smart move since it sortah helped us focus more on Skye. But for those who're a big fan of this pairing, fret not, for he did showed up in the film's most grandest shot!
It's an understatement to call this film just another sequel to a slasher film, because even if it is true, it did managed to save a franchise with a heartfelt finale. Though I am gonna miss this franchise, I think it's for the best to leave it as it is; unless, of course, someone's gonna go Friday the 13th: A New Beginning on us and play out a new set of cards for us. Could be years before they pitch this idea but for now, whether you're a fan of this series or just a slasher film fan at heart, don't miss out on this!