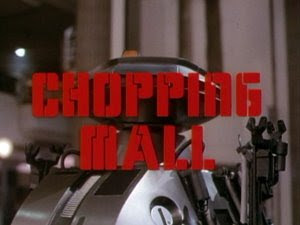 A shopping mall can be a dangerous place; apart from large robberies and pickpockets, there are also the rude sales person, the tempting greasy hamburgers dripping with cholesterol, and the occasional bawling babies on the table next to you while you're eating.

Oh, and then there are the killbots.

A new security system is installed in Park Plaza, one that comes with laser-eyed tazer-shooting tank bots and mechanized steel doors to prevent hapless robbers from stealing diamonds and stuff. While violent in their methods, the sales pitcher reassures that the "protector" bots are only programmed to neutralize any apprehended criminals and there's nothing to worry about since nothing can go wrong. Insert Paul Bartel and Mary Woronov from Eating Raoul (1982) as one of the spectators watching the demonstration rolling their eyes in disbelief.

Some nights later, a group of four teen couples decide to stay in the mall after closing hours to party, have sex and, for one couple, watch Attack of the Crab Monsters like the adorable virgins they are. Unfortunately for them, that is also the same night a freak lightning "storm" hits the rooftop control system of the Protector bots (three times!), causing a massive malfunction and somehow transforming the Protectors into bloodthirsty "Killbots". These newly converted robots make easy first killings out of the two eggheads who were supposed to be monitoring them; soon, the Killbots make their rounds, murdering off anyone their pinchy little steel pincers can grab hold on to!

While the title is misleading as to no actual chopping was done, Chopping Mall does fit in as a fun and cheesy scifi slasher about killer robots and teen boys who get turned on from tasting pizza on their girlfriends' mouth. It's no real winner in logic and writing but it's silliness is original enough, its execution well paced to keep it from ever being dull, and it's even successful in blending bad movie funnies with a humorously bad script.

Overall, the clichés are still present; the characters are working class variations of your typical teen victim stereotypes such as the jerk/jock, the born leader, the nerd, the disposable female screamers and the (obviously marked) final girl, all of them still doing things that will eventually lead to their deaths. They are, however, likable enough to be forgiven as they do learn to band together when time calls for it and we end up siding with these guys when shit hits the fan. (In a situation like the one they're in, who wouldn't?)

The idea of killer bots isn't entirely new for 1986; on the same year, Craven released a film about an A.I. chip transplant gone wrong in his scifi, drama/horror hocus Deadly Friend, and two years prior, we have another one hailing from the future to kill off a possible war hero in The Terminator, an action scifi thriller that honestly borrowed a lot of slasher film elements. But what set these two titles from Chopping Mall is that the bots here look like they fit in; they're not utterly high-tech, but rather clunky, cheap and real robotic-sounding, making them less humanoid and more fun to watch as they slaughter one teen to the next. Although the sleeping darts and tazer are considerable, one may question the necessity for these guys to have steel-cutting lasers to begin with. (It's like the guys who designed these "protectors" were begging for a bloodbath!) They may not be "true" slasher villains in the sense that they're more akin to a commercialized Dr. Who Dalek than a guy in a Halloween mask, but fret not, they still get the job done. (Plus, they're awfully polite. How often do we have killers wishing you a good day? Then again, they tell it to you once you're dead...)

Chopping Mall is a real treat as an 80s time capsule; big hair, corny lines, a cheesy opening featuring bikini clad models used to advertise stores, electro-synthesizer scoring and a whole lot of shoddy practical effects, it really is a film made to be an enjoyable ride for the decade, despite the low budget and over-the-top premises. The film's really nothing more than an exploitative time waster that's made to entertain and entertain only, so those who're expecting a smarter, deeper horror shtick will surely be disappointed. Then again, this is a movie about robots with lasers hunting down teens in a mall in the 80s. I can't think of anything else you would be looking for in that.

A cult classic of its own right, Chopping Mall is a must see for all fans of the cheddar, slashers and/or weird horror alike! Get it as a purchase or see it as a rent, just remember: Have a Nice Day! 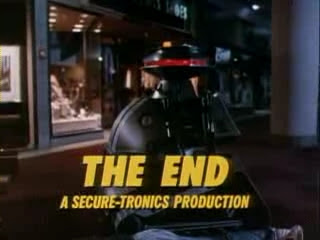