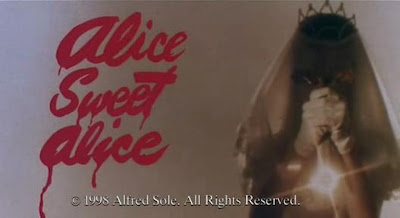 Ah yes, the one slasher film that makes me feel great as a lip-servicing Catholic! Alice, Sweet Alice was one of my first sought-for slasher title during my early years of rediscovering the sub-genre (as in my College years) and quite a memorable experience to me since I was able to watch it during my "Crisis of Faith" phase. My religious life was at a rocky path around those times but in the end, I came with an epiphany, something of which I came to live with thanks to this film: Philosophically and Spiritually, I believe in God, but I no longer (fully) believe in religion, as people behind it would more likely to mess it up, thus starting my happy and clear life as a Religious Skeptic~

But enough personal Theological chit-chat, let's get down and taboo dirty with this well-loved, cult classic proto-goodness!

Set in 1961, a Catholic community is celebrating their youngins' first Holy Communion, a sacrament signifying a child's first step as a true Catholic. Karen (a very young Brooke Shields!) is one of its celebrants, with most of her family, neighbors and friends showering her with celebratory gifts and the best of luck, much to the jealousy of her older sister, Alice, who tantrums and pranks everyone for the attention but only to end up alienating herself further as no more than a big nuisance.

When the big day comes, just moments before young Karen receives her first communion, a figure in a yellow raincoat and plastic mask lures and strangles the girl in cold blood before setting her body on fire. Taking her place is Alice, stepping into the altar and shocking her family, but before anything can be done, Karen's burnt body is found and chaos ensues inside the house of God.

All fingers point to Alice as the culprit, but her parents beg to differ and demand further investigations. Meanwhile, Alice desperately tries to prove her innocence as her sister's death begins to haunt her in overwhelming guilt. Things go for worse when the figure in the yellow attacks once again, with witnesses recognizing the killer's get-up as that of Alice's during one of her pranks, marking her further as a likely suspect for these crimes.

Of course, as far as the plot is concerned, Alice, Sweet Alice is still ridden with enough red herrings and twists to keep a viewer guessing. (Hence why some people sees this film as a perfect example of an American take on the Italian Gialli) We could suspect Alice as the killer since everything the killer was wearing is seen under her possession before the murders began, but again, this seems too obvious and there other characters missing during the ceremony through and through. This movie made sure that the likely suspects can still be anyone, giving us enough guesses to keep us glued and enough shock factor to keep us horrified and wanting more.

Alice, Sweet Alice (which is originally titled Communion but changed to avoid being confused as a religious horror flick) is perhaps one of the best proto-slasher to be released mainly due to its controversial themes of child murder and heavy Catholic imagery, setting up effective taboo-breaking for considerable shock value and playing with heavy atmosphere with  guilt-provoking religious imagery that constricts and rises the tension around the murders.

Production-wise, most of the talent involved in the film are a mixed bag, ranging from the overly cheesy to the dramatic. Paula Sheppard's portrayal of the scene-stealing (and possibly evil?) Alice is clearly worth mentioning, a strange enough case since the actress was actually a 19 year old playing a twelve year old girl, a fact that somewhat adds to the creepiness and uncertainty her character possess.

Cinematography on this movie is expressive artistically, showing absolute clashing of two contrasting symbolism. The murders were few but the overall effect of them on the plot, as well as on the actual build-up, were most effective. Two scenes in that matter really stood out for me, one being the chaotic and claustrophobic attempted murder of Alice's Aunt, the other was the brutal slaying of a morbidly obese child molester, both of which I find to be the film's most savage moments. The killer committing these crimes would also become one of the more recognized masked villains among slasher fans, notable for their striking yellow raincoat (inspired by the brightly colored get-up featured in a slasher-friendly thriller known as Don't Look Now (1973)) and a creepy-looking plastic mask. Mix up a haunting score and you got a genuine creep-fest at hand!

It's steady pacing is its only flaw, but one can bypass this in favor for the overall results of the film. Alice, Sweet Alice would remain as one of the key proto-slashers that stood firmly on its own, influencing many and would become a title any self-respecting fan should see. It's effectively creepy, moody and brutal, even by today's standards, thus deserving a little more credit as a classic 70s chiller!

Bodycount:
1 girl strangled with candle stick, set ablaze
1 kitten had its neck crushed
1 male beaten to death with bricks and thrown off a window
1 male knifed to death
1 male knifed on the neck
Total: 5