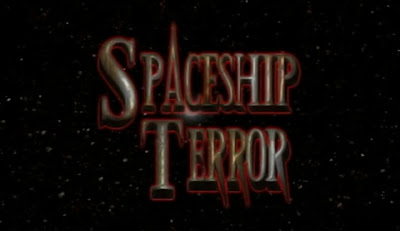 They say that if you begged for something enough, sooner or later the universe is going to answer. The thing about this, however, is that the universe can also be the biggest troll out there as, more or less, I begged a lot for a slasher set in space that wasn't a sequel and I end up with something like this.

Somewhere in the future, five women and one dude crash their ship in a deserted planet but get rescued no sooner (as in mere minutes) by a derelict ship that picked-up their distress call. Inside, they found most of the crew missing and one hysterical girl begging to get out as it turns out their rescuer is really a deranged maniac with a penchant for torture and murder. Now under the madman's mercy, the crew have no choice but to try and survive, follow the killer's rules or be killed on sight.

Slasher film in space, as stretchy as it sounds, is possible; with movies like Alien (1979) (a proto-slasher for my book) and Inseminoid taking the hack-and-slash formula literally to the stars, franchise sequels like Jason X and Leprechaun 4: In Space having their titular killers kill victims in zero gravity, as well as hybrids like Sunshine (2007) and Supernova (2000) starting off pretty sciency only to end with each crew being murdered by a loon, it's only a matter of budget, imagination and direction that a will keep a space slasher fun and workable. Sadly, Spaceship Terror, while it has the subtle imagination and a fair direction, lacks too much of the budget that the end result makes a Turkish Star Wars parody looks like an Oscar winner.

The premise of the movie took place mostly inside the ship, but thanks to the budget, we're mostly limited to two rooms and a bunch of hallways that actually look all the same. I say mostly because we do get shots of the ship's interior, exterior and some of its inner machination, but they all look like CG test footages, cringe-worthy as some of the killings were "enhanced" by these graphics. Editing is no better either when shots used for a murder scene or two appear to have been done using the outdated version of Microsoft's Powerpoint.

The other flaws are no stranger to these kinds of production, mainly bad audio and questionable acting, but its a shame for all honesty as the plot sounds simple enough to enjoy, but, again, the lack of budget took out most of the fun this film could have offered.

Some good can be found, however; most of the kills are done in practical effects and there's some old schooled mean-spiritedness and exploitation, such as the fact that these women had to strip down to their tank tops and undergarments in order to stay on the killer's good side and survive, coming in halfway of being cheesy enough to be laughable. The killer is sort of a space age backwoods hillbilly mess, kept alive by a cyberpunk life support gear and brandishing a mean harpoon gun to catch his victims before murdering them, which is kinda cool if torture porn wasn't so overrated in its days, I guess.

If done under the right budget, Spaceship Terror would have been a fun ride; I was never bored, but the film was irritating on a level so I can't blame anyone who will piss-mouth this movie. Could have been a lot better...