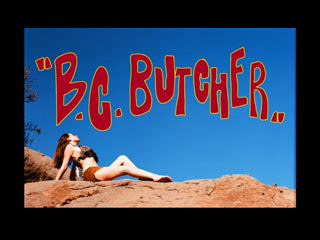 Have you ever sat through a kid's first piano recital and can immediately tell that their little rendition of Bethoveen's 3rd sucks but can't really say it at their face since, well, it's a kid and there is the risk of being that one jerk who made the neighbors' kid cry and will forever face the wrath of the helicopter parents? Welp, I am having the same dilmma right now as I review this Troma release but seeing the "kid" in question, curiously named Kansas Bowling, is 19 years old (17 during filming), I'm sure she can take a few criticism. I hope.

In B.C. Butcher, tribe leader Neandra and her cohorts murder (and cannibalize for reasons I am yet to get) one of their tribe members after the girl was caught canoodling with Neandra's boy toy. Unfortunately for them, the execution was witnessed by a hulking man-monster and, after falling in love with the girl's corpse (eww?), made it his mission to avenge her by killing those who were responsible for her death.

Now, I will say that I do like the idea of this film taking place in prehistoric times as we do not usually get slashers outside of modernized settings and I am always on the lookout for something different from the usual "cabin in the woods massacre" or "campus teen killing spree" deals. I will also say that the simplicity of the plot and its 50 minute running time reeled me in as it sounds like the kind of slasher movie I am normally comfortable with, that is until I actually get to see the movie.

To be frank, B.C. Butcher looks more like a middle school movie project than the kind of film one should be distributing and selling. The story juggles its attempts as both a prehistory and slasher parody with props that look like something you can get from a dollar bin toy store (with a plush leopard as a "ferocious" beast in one scene), a script littered with cavemen pun and anachronistic visual humor, wooden delivery of said pun-infested script, obvious backyard low budget production quality, and a killing spree that lacks any blood or imagination, so much so that I feel kinda bad to the other suckers expecting the same kind of cartoonishly exaggerated bloodbath most Troma releases are known for. There are also hardly any characters to root for, which kinda made worse by the fact that the plot's tone keep shifting from something cheesy serious to cheesy funny too sporadically and the titular Butcher, while he may have looked kinda cool in the shadows, barely looks that impressive nor menacing in broad daylight as we can tell it's a dude in a loin cloth and a rubber monster mask.

Now, I am aware that this movie was meant to be harmless fun, but comedy, just as any kind of art form out there, can be subjective and while some people will find the shoelace aglet production quality of B.C. Butcher as entertaining in a so-bad-it's-good Z-Grade movie kind of way, or something like a homemade family video made for laughs whenever relatives are over, there will also be people out there (like the shmuck writing this review) who would see it as a waste of time and should have been better left sitting inside someone's shoebox, stuffed away in the attic along with their parent's private sex videos collecting dust, dust mites, dust bunnies, and possible otherworldly gnomes hellbent on stealing shoes. It's not for everyone as most Troma movies are, so I'm still sure Butcher here will find its audience and fans out there, just not gonna find one in me unless I am drowning in lager, high on expired prescription drugs, or something of both which I'm pretty sure will numb my brain to the point that it'll find a jiggling ring of severed fingers funny.

So, long story short, B.C. Butcher is a rather interesting project, just not liking the kind of treatment it was given. If you are a true hardcore Troma fan, I can guarantee you will like this one and even consider owning it. For those who have no patience with zero-budget backyard projects that somehow found a way to charge people just to see it, I will say you are free to try it or leave it, just be wary what you will be getting into.

Bodycount:
1 female stabbed in the gut with a spear, disemboweled
1 male stabbed with an animal horn
1 female ran through the head with a dead branch
1 female brained with a club
1 female dropped in a snake pit
1 male falls to his death
Total: 6
Posted by Kaijinu at 9:53 AM