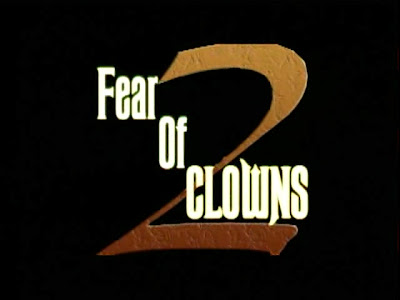 Decided to follow-up Fear of Clowns with its sequel just out of curiosity. After some personal encouragement from one of the staff in Kangas Film, the company who produces these film, I was in with high hopes to see any form of improvement from the rather cheap but conceptually interesting first, but all I saw was, um, something else. Worse.

Two years after the events of the first film, Shivers the Clown managed to break out of his confinement and tagged along two psychos who agreed to help him out with his plan to murder his target, Lynn Blodgett, the one and only survivor, and still our heroine, from Shiver's previous attack. Dressed up once again in his topless clown outfit, Shivers and co. hacked, slashed and mutilate their way through cops, punks and rural families just to find her, but what they didn't know is that a certain Detective Peters, the man responsible for Shiver's capture, is back as well and willing to do anything just to see our clown six feet under.

I admit, the plot was an improvement, and so does the gore and kill count, but everything seems to be dragged down by the same flaw that prevented me from rating the first film any higher: budget. The direction, set and production of the film stills show some homemade quality, despite the bigger look, Audio still muffles around and the acting is varying in degree. I like the fact we got more killer clowns here, but their performances and design are underwhelming and mediocre. We got one that looks like a cannibalizing Ronald MacDonald that does nothing but giggle everytime he murders (hence his name "Giggles The Clown". How Original), and then another one that had a painted on Third Eye on his forehead dubbed Ogre, who appears to have a thing for collecting heads. These two are a fair addition, but they're underused in favor for our main killer, Shivers the Clown. 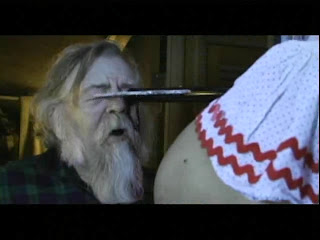 Shivers hadn't change much; he's still believes that his schizophrenia can be cured by killing the then-painter-now-author Lynn, a lead girl that I still find myself a hard time feeling for. The big clown eventually goes solo, but after killing Giggles for almost killing Lynn, he soon find himself dealing with more than a scared woman and her detective bodyguard. Kinda nice to see "El Macho The Clown" once again, but I really wished they could had done something a less convulsive storyline for him to appear in.

Perhaps the biggest complain I have with the film is that it tries too hard. Still. It keeps everything under a serious tone but the quality of it just made the movie terribly corny and I can't help but feel like they could had done more exploitation with just a simple story. Tagging along a subplot of one of our leads being just as mad as the killer they pursue, does shake out a bit of interest for the fans, but I find it rather tired and underdone.

Overall, the film isn't working out to me; too many set-pieces just for the sake of set-pieces, Fear Of Clowns 2 is a slow, muddy road that tries to market one cool-looking killer clown into a franchise. If only they kept it as a subtle and straight-forward slasher, I would have appreciate it more, but for the rest of you fine folks reading this, if cheap production isn't a hindrance for you, then try out this face-painted nightmare!