Well, glad that I have my hype really low for this one. 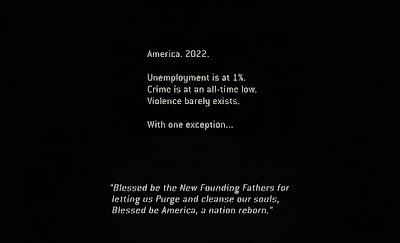 Set in future America in 2022, a country "reborn" with an incredibly low crime rate and unemployment thanks to an annual event that had people vent out their negative emotions under the approval of the law. An event known as the Annual Purge. Set in one night for twelve running hours, the Purge had every willing individual set out for the night to do whatever criminal activity they wanted, murder most popularly, without any authoritorial restraint, given that they do not use weapons that are above the agreed classification (no nukes) as well as no high class officials should be harmed. (as in the President and his cohorts)

A top seller of a high-tech security system, James Sandins and his family prepares for the night under the comfort of the same system he had been selling, which locks them in behind heavy metal door and barred windows, preventing any "purgers" from attacking them. While initially safe inside their home, all's not too well in the family; Zoey, their eldest daughter, going through her rebellious stage, is dating a boy believed to be older than her, their tween son Charlie is doubting the need of the Purge, and Mary, mother and wife, had been told there have been gossips circulating around the gated community on how her family had been making money out of their neighbors. Things had gone for the worse when a bloodied stranger rocks the conscience of their youngest, leading him to letting the man in, and unknowingly getting his family involved with a group of masked "freaks" who have targeted the stranger for their purge.

Now pressured to give up the bloody man or be killed along with him, the Sandins had to make the ultimate choice to whether stood down to the purgers' level, or die fighting back.

It would have been a big movie; with a concept of a free-for-all crime spree with no consequential drawbacks, you would actually expect a chaotic movie with a lot of taboo breaking, murder, rape, robbery, etc. But instead, we have here instead a rather dull and basic home invasion thriller with a bunch of over-hyped killers and one family with poor decision making skills. I mean, for all honesty, who would had let a man like that in during that one night where all crime is legal, given the possibility that the bloody stranger might have been a killer himself? As far as I can tell, The Purge is a very clichéd movie that's overusing its hype promising something rather new into the fray, as in the unusual concept which was presumably to provoke some thought.

Problem was, this crisis-in-morality gag's been done loads of time in better home invasion movies prior to this; with films like Funny Games (both Austrian and American versions) and Man Bites Dog already showing us the psychological creepiness of people breaking into homes and how, out of force or sheer willingness, it can get us into involving ourselves in it without noticing it. The Purge never got into this level; with a sorta interesting hunting scene in the middle of the movie, it slowly devolves into a tired and easy shoot-em-up thriller, with the family (most of them) finally deciding to fight back some bad guys who's bark is worse than their bite.

Which leads to another misfire for me; the masked "freaks" that was supposed to be the film's main group of antagonists are probably the worse kind of home invaders I've seen. The concept of a large group of killers hunting down a family in their own home was a recipe for a bloody good time given that we got some good grue and action going on, but all these masked jokers did was look menacing and wield their weapons like badasses, which did very little to help them against the gun-packing Sandins. (Which killed them all in less than fifteen minutes. It's embarrassing) There's a little twist in the near end, but that barely pushed any limits in terms of shock factor, or originality for that matter.

I would had given it a lower rating if I didn't enjoy it at some point. Any positives I can get out from this one would be nothing more than my praise for the idea, how the killers looked, and the climax having some good action on it, but apart from that, this film was forgettable as heck. It somehow pitched a sequel already, so I guess we're gonna see more of this so called "Purge"? I really hope so, cuz this movie really felt like it's holding back on us.