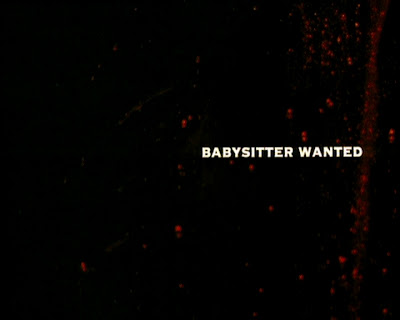 How many times have you heard this story? Babysitter's alone with a kid and then she gets weird phone calls from some guy breathing over the other end. Surely you would know that the twist in this story is that the loonie is actually making the call from inside the house, as truck loads of slashers and horror flicks already utilized this plot with the likes of the When a Stranger Calls franchise. Babysitter Wanted is another that took a chancing stab at this creepy tale, but what sets apart this from the rest of these exploiters is that it offered a neat twist to the story.

Angie is a girl moving out of her home for college; she's sweet, clean, God-fearing and in need of money. So when she finds a babysitting gig at a nearby secluded farmhouse, she pays a visit to the family to see the little tyke she'll be looking after some time later. By far, the kid turns out to be a quiet yet adorable boy in a cowboy costume who only eats a special kind of meat. Angie thinks she can handle it and reassures the boy's parents that everything's gonna be alright.

Boy, was she wrong.

At the night of her gig, things were going as calm as possible until she begins to receive weird phone calls from a guy who's probably a religious nut and trying to break in, apparently to murder them all. Doors get broken down, chases are made, weapons are wielded, just as you think you know where this is going you'll be damn surprise once the cowboy hat falls off the kid...

It's hard to do a review of this film without revealing much of the twist (so if you haven't seen the flick yet, I suggest you stop now and see it for yourself), but all I could say is that I might be giving this a good rating cuz of my Catholic upbringing. (though, I like to see myself as a religious skeptic nowadays) Nevertheless, for those who have seen it, you'll have to admit we hardly see anything like a Pro-Christian slasher flick. Ironically after the twist is revealed though, we get to the real bloody stuff, mostly involving something about rare meat, Bill Moseley playing a good guy, and some really weird killer kid action as the little munchkin devilishly glee at his victims while holding a knife.

Much of the film works as a horror flick thanks to its modest looking production value and agreeable change of tone at the last act. The twist definitely has it's winning ordeals, whether it may hold to the rest of the movie or not. What made Babysitter Wanted drop down from a possible perfect rating in my case, however, is the ending: again, I may have grew up in a Catholic community, but even I have standards and I can tell the ending feels too corny and rushed, left it wide open for a possible sequel. 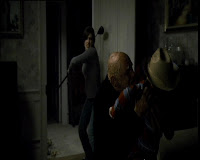 It may not be as shocking as other religious toned slasher flicks out there, but it's far from being horrible itself despite the pro-Christian context. (Not much on the nudity and the final girl is too obvious of her survival) Babysitter Wanted is fresh enough twist on the classic slasher plot with a good set of baddies, fun curveballs and a bloody mess to boot.