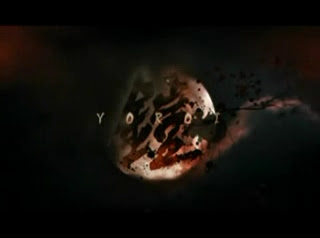 With a title like "Samurai Zombie", you were probably looking forward to a cheesy B-Horror with loads of blood, guts and the occasional funny bone. For me, I saw blood, some guts, but not enough of the workable funny bones in this typical Asian horror weirdness.

A family of four spends a nice outdoor bonding, driving around a long forgotten village hidden in the woods, until it suddenly turns for the worse when they accidentally hit a man. As the father steps out to inspect their road casualty, the man suddenly stands up, fixes his neck and points a gun at them -only to get shot down by a couple of fugitives. The punks then hold the family hostage and force the father at gunpoint to drive through a gated and deserted village.

Once inside, one of the car's tires suddenly blows flat and the GPS goes haywire. Now nowhere to go, the duo orders the father to run and find help, which he does in fear of his family's safety. For some reason though, upon finding an accursed shrine in the village, our patriarch digs for a sword and decapitate himself, awakening the titular samurai zombie and his undead cohorts, with a bloodlust that can only be satisfied by slaughtering what remains of the family and their captors.

With its strange tone and often gritty themes, I can tell Yoroi's a work of love for the exploitation genre, leaning close to backwoods slasher flicks, gory zombies and violent crime thrillers. Interestingly, the movie's script tries to give its characters a bit more meat and even some depressingly harrowing moments (especially the ending), but as far as I can appreciate the film's attempts to do a traditional slasher (all the while breaking the slasher victim tropes) I cannot hide the fact this movie is nowhere as good as it should be.

For one, I'm not much of a fan of how the undead killers were portrayed here, looking too much like some guys with cheap make-up and heavy armor thanks to the small budget. As it turns out, making zombies shamble and limp while in armor and carrying weapons doesn't make them all threatening. Instead, it paced the film. Painfully paced it. To the point that it gets awfully boring with hardly anything going on.

As for the gore, while it ain't strong, it ain't weak either. We got some fountain-like blood work and eviscerated organs, but majority of the gore were done away with cheap CG, which is very disappointing for a self-acclaimed "splatter movie" in my book.

Samurai Zombie's also marketed as a cheesy slasher-comedy made for gore-hounds alike and big fans of Japanese weirdness; unfortunately, I'm pretty sure not everyone's gonna get it. The jokes can be uneven, off-place and, honestly, I can't really find anything to laugh at seeing this is an innocent family being harassed and tortured. This movie could have worked a lot better if it was a serious horror movie but its writer, Ryûhei Kitamura, who you may remember as the genius behind the adaptation of the Clive barker short Midnight Meat Train, wanted to do a exploited B-flick so I guess this was made for a specific kind of horror fan.

Yoroi's a fun movie if you're not expecting much on the budget department, or if you're a fan of Japanese New Wave Splatter. It's also far from being a fair and smart slasher movie, but at least Japan tried and even if sometimes they do seem to try too much, least there's a bit of fun to offer from their end.