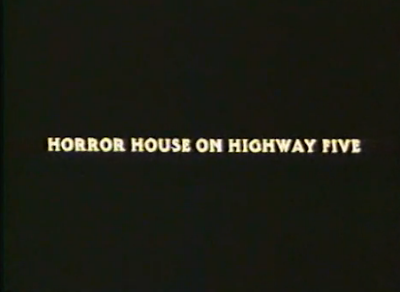 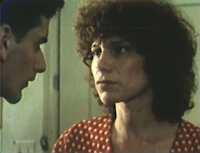 Okay, let's start with an exaggerated retelling of the first time I watched this film:

It was a dark and stormy night when a demonic claw punched out of my computer screen while I was searching for the latest update on the release date of V/H/S/2, hitting me on the nose before tossing me a bootleg copy of this movie. Ten minutes after being initially knocked out, I woke up and saw the movie, praised the gods for giving me another rare find to watch and started playing it. Unfortunately, I failed to notice the unusual smoke spewing out of my DVD player and before I knew it, I inhaled it and ended up going through the loopiest mind trip involving talking horses, sexy anthropomorphized foxes and for some reason Rob Schneider riding a giant lawnmower through a field full of babies. I finally snapped out of the trip and noticed the movie was playing...and yet, I can't tell if I'm still hallucinating or this is the actual film itself.

Horror House on Highway 5 has to be the one of the few film equivalents of a dope pill, as everything (and I mean everything about it) just doesn't add up. (Or maybe it did but I just refuse to accept it) The film starts off with a moron and a shmuck trying to decipher the meaning of a tarot card obviously meaning "Death". One guy gets it right, actually, but the other claims the card with a skeleton and a scythe means "love" cuz the effin' skull's smiling.

Everyday of my life, I have to deal with morons. Now this. 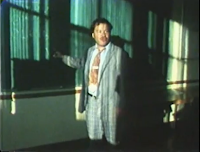 Moving on, the real plot of the film actually follows a group of students who are given an assignment to write a paper on some German guy named Bartholomew who, some time ago after researching about V2 rockets, went crazy and killed a bunch of guys in America before residing in a nearby town. One of these students decided to interview Bartholomew's living relatives, which so happens to be the two fucktarts from the beginning. (Oh boy, that explains a lot of things) So, long story short, the brothers are idiots, but are smart enough to try and do some religious Nazi torture ritual, kidnapping the unfortunate interviewee to be their victim. Then there's something about some kids making replicas of the V2 rockets to honor the Nazi madman (...let's not go in there, please) and, of course, Richard Nixon.

Or rather some guy in a Richard Nixon mask and suit, out killing off the students for God knows what reason.

If you said "what?" after reading all of this, you have my sentiments. 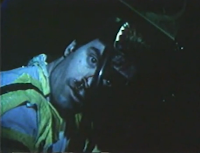 For a film where there's nothing like it, it's hard to decide whether to hate or love the product; you could hate Horror House on Highway 5 for it's ineptness in direction and scripting, lack of strong elements (gore, scares, tension, etc.) that'll make it a worthwhile genre flick or make sense at any point at all, and yet you can't completely abhor it coz it tries to be different and some of its ideas come with the sole intention to be camp.

The overall feel of watching the movie is like that of watching a child with special needs trying to sing the American National Anthem at the beginning of a football game. It's uneasy but out of pity, you just have to nod your head and smile cuz let's face it, any movie where a character can escape her killer by dancing is worth a look. Least just once.

I could say I appreciate the idea of making the killer wear a Richard Nixon mask and for giving us a trippy ending, but with an uneven level of intentional and unintentional cheesiness, low gore count, and, well, lack of any strong plot, it can leave you wondering what the heck did you end up seeing as one moment ago, you were expecting a slasher flick.


As a horror comedy or a cult classic (I think), you could say Horror House on Highway 5 could work, but as a serious horror flick...um, no, I digress that we don't call this a "horror" flick as the only true horror from this movie is the fact that someone even thought about doing this flick. (What is wrong with humanity?!) If you like it, I applause for you and hope that after watching this, you can still walk in a straight line so I can buy you some booze and discuss about some rumors I heard about some Facebookers trying to make a sequel titled Horror House on Highway 6!
Like, what the fuck?

Bodycount:
1 male strangled
1 female beaten to death
1 male killed in car crash
1 female beaten (I think)
1 male found mangled
1 male lands head first to a rake
1 female had her face beaten with a bomb replica
1 male hit on the head with car jack
Total: 8
Posted by Kaijinu at 11:22 AM