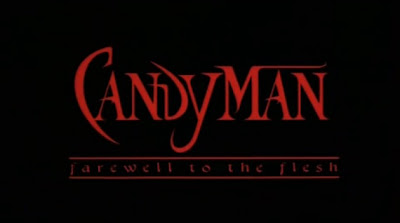 Some time after the first movie, the Candyman returns to slaughter those who defy his existence once again, starting with a professor Philip Purcell, who you may remember as the expert of the Candyman legend from the prior movie, now getting slaughtered after tempting to call forth the specter as a promotional stunt for his new book.

Due to his violent public confrontation with the professor that night, the blame goes to an angry son whose father was murdered in a Candyman-like fashion some years ago. Now seeking help from his New Orleans school teacher, Annie Tarrant, he begs her to look into the Candyman legend to find the truth. Unfortunately, Annie refuses to believe in the legend and proving to her class that there's no such thing as a hook wielding boogeyman, she invoked his name five times in front of the mirror. Thus history repeats itself as the ghostly killer begins to reveal himself in her most isolated and weakest, killing off anybody that is dear to her or were just in the way.

While the movie is basically a retelling of the original, Farewell to the Flesh marks the Candyman's step into the world of exploited slasher films as he returns with a bigger bodycount and relatively more blood to compare. In turn, however, Farewell to the Flesh lacks the comprehensive and thought-provoking psychological power of the first, as the "did-she-do-it-or-not" mind scare was given away in favor of jump scares and supernatural slasher thrills. So is Candyman 2 a run-in-the-mill slasher everyone is familiar with? Yes and no.

As to many supernatural slashers out there that doesn't involve it's killer/creature posing in physical form (et al. Victor Corwley from Hatchet or Jason Voorhees in his zombie form), the plot focuses more on the mystery regarding The Candyman's relationship to the current female lead, rather than the actual urban legend itself and its effect on everybody. Sadly, I didn't find this as workable of an idea; while we all know from the first that The Candyman needed to murder and mutilate those around the lead woman in order to prove that he exist and fuel his very well being, in this movie, it shows that Annie's related to the Candyman, insinuating that they're related by blood or sorts. Now, that's a one in a million chance to be honest, as Annie could have been just anybody saying Cnadyman in front of the mirror five times and the bit about their bloodline being related was just of fondue thrown in for the sake of providing fans some twists.

Somehow, even if it had stepped down from a cult classic psychological thriller, Farewell To The Flesh kept the serious and heavy tone of the first thanks to the haunting score courtesy of the amazing Phillip Glass, some great shots showing the dark corners of New Orleans celebrating Mardi Gras and, of course, Tony Todd reprising his role as the charismatic title boogieman whose deep voice sends both shivers and awe to his presence. Though the revelation of his back story kinda lessens his impact, and a very weak finale just made this character's demise a tad silly, his prowess when it comes to his hauntings and murders is undeniable and his backstory as a black slave wronged by overzealous bible-thumpers has its strong points.

Gore is something this movie has to be proud of, too; some plenty of blood red stuff here including hooks going through guts, death by bee stings and an impressive back evisceration, seen through the eyes of a security cam capturing a technologically invisible Candyman slice open a victim's back. (Best part about it is that the victim was a shmuck of a cop. Nothing beats an awesome kill committed to a douche!) There's some scares, too. Weak jump scares, but so long as I'm happy with the overall results, I can live with that.

This might be the last good entry to this series. Honestly, they should had left it with just one movie, but I guess success leaves you cashing in with hopes of striking gold twice. I would still prefer the original, but at least as a slasher film, Candyman: Farewell to the Flesh is an acceptable entry and still an elevated work compared to your average slasher.