Wow, how long since I had done this?

You know these movies. People loved them. You might too, but sometimes I wonder what will happen if some nut decide to turn the franchise into something...bloody? Gored up? blood soak with something red and sticky? When a masked psycho stalks a singing couple, or when an escaped loon take refuge in a house belonging to a stereotypical family? When normal movies suddenly gain "Slasher Sequels!"

Here are some of the "slasher sequels" I made up for your or your family's favorite films. Now don't kill me for this, I just wanna have fun.. 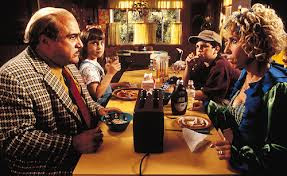 What would happen: Two years after the events of the original, Matilda's real family, The Wormwoods, had moved to Guam to escape the authorities after a bust on their illegal car shop operation. Seeing an opportunity to restart his business, Harry Wormwood continues to make cars from used parts for unfair prices; that is until a suspicious worm-out car is seen driving by now and then.

Harry made nothing out of the mysterious car (though he sortah recognizes it as one of the cars he sold), but with the cops suddenly tailing on them sooner than they believed, the Wormwoods drove away into the hot desert, looking for an arranged accomplice who they will stay with until the heat is off. Things were going according to plan, until the mysterious driver ran over their son, and began killing everybody they came contact with.

With the cops hot on their tail, and a madman apparently framing them for his killing spree, can the Wormwoods find a way to save themselves? Or die trying?

possible murders: A hit and run of a boy (yeah it's their son. forgot the brat's name...), a buck knife stabbing, someone got disemboweled with a bike's running tire and lots of shotgun shootouts.

Suggested Titles: Scissorhands: The untold tale.
Tagline: these blades where made for cutting...you

what would happen: In this basic slasher set-up, taking place in the present, a group of teens from the small town that Edward once became part of decided to make an investigatory thesis on the local legend based on Scissorhands. 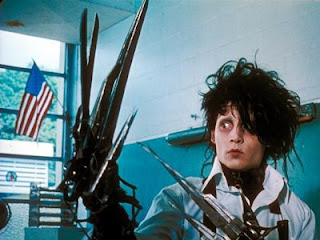 Upon entering, they find themselves trapped after the floors gave up and caving them in. Looking for a way out, they found the lab where Edward was made, along with the notes explaining Edward's creation, showing the details of the project. Unfortunately, they're not the only one who's finding: someone inside in the mansion is picking them off one by one, with a deformed hand made with scissors. Could it be Edward? Or something else...

Charlie and the Chocolate Factory

what would happen: Years after being traumatized by the events in the chocolate factory, the young boys and girls that was "rejected" by Wonka made a pact that one day, they'll visit the factory again and exact vengeance on Wonka for humiliating, and nearly killing, them. Unfortunately, as years go by, the factory shuts down after an accident killing an entire family residing in it, but that didn't stop the four children, now adults, to visit it and destroy the very thing that led their lives into depression. 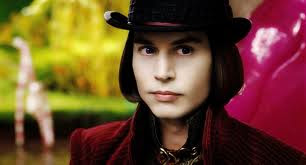 As the group relive their nightmares, a group of teens had also made their way inside the chocolate factory in hopes of recovering lost packages of candy. hoping to sell them. But someone is still lurking inside the chocolate factory. Someone armed with a razor sharp cane, who then proceeds to kill them off, one by one, in a fate similar to what they once had before...

possible murders: fat guy nearly drowned in a chocolate river and then gets a throat slashed, fried by blinding TV lights, pulled apart by taffy puller, and burned alive in incinerator.

What would happen: Taking place in real life, this horror-comedy will concentrate on a studio who is planning to expand the Pixie Vamp franchise (a parody of Twilight) by making another sequel a few months right after they claimed that the last of the Quadrilogy is indeed their last movie. The Vamp fans rejoice, one angry and disgruntled horror fan isn't. 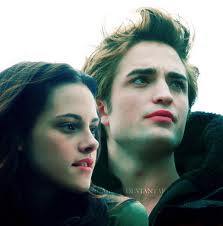 Some night later, a prop room was ransacked, a guard was murdered and a Transylvanian Knight costume had gone missing. Afraid of bad publicity, they covered this up as an "accident" and forges on to the filming, but unfortunately, the cast and crew begins to thin down as a killer in the Knight's suit began to decapitate, drive stakes and burn people with welded metal crosses, all in typical vampire lore fashion.

It's a race against time, and money, as the remaining crew tries to figure out who's the real killer among them, and whether they should do another movie that's only made it this far relying on heavy fanbase... 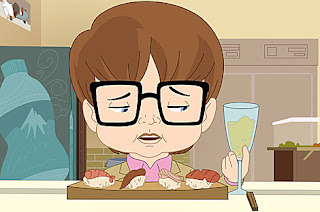 What will happen: In this animated movie, it follows the De Longpre family getting terrorized by a group of hooded punks. The twist here is that this is no mere home invasion; the Mexican maid Allen fired in one of the episodes exact vengeance via seeking the help of a voodoo witch doctor who raised the maid's dead sons after they committed suicide to ease their fired mother's burdens. The three revenants, who wears plastic masks to hide their demonically shut closed faces, then began to hunt down everyone that Allen mostly gets involved to, both adult and children. They kill them off one by one until it's only the De Longpre left, which the undead killers have a special game in store for them...

Possible murders: truck loads of nasty murders such as an entire family being slaughtered with axes, knifes and machete, a guy with a bad hair gets scalped and then electrocuted by smashing his head to a computer, an obese lady getting crushed with a garage door, people being run down with a car, torture via soaked feet and jumper cables to the groin, back being broken and then left for dead in a busy traffic, heads twisted, arms torn off, the sky's the limit for animated gore, and I'm hoping if this film's gonna be made, make it a competition for The Summer of Massacre. (Who, I would like to congratulate, for getting into the Guinness Book of Records for most bodycount in a slasher film!)
Posted by Kaijinu at 1:21 PM

Email ThisBlogThis!Share to TwitterShare to FacebookShare to Pinterest
Labels: animation, if they were slasherfied, Random Stuff, slasher