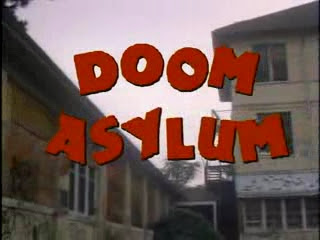 I once asked myself if I am that one guy who can enjoy almost anything life can throw at him and, for all honestly, I am not. So will it be that surprising that I have mixed feelings for this supposed slasher comedy? I guess not.

Doom Asylum features, much to insult to my intelligence, the dumbest cards to play every slasher stereotype there is, the killer included; we focus on a group of five teens venturing to an accident site to pay respect for a man named Mitch, who crashed and lost his wife in a drive gone wrong. This sentiment is quickly tossed off the window when these kids decide to go sunbathing and picnicking instead, where else than inside an abandoned asylum!

Same asylum where Mitch, horribly deformed from what should have been his autopsy, murdered the morticians and, apparently, the rest of its staff? Don't know, don't care. It's now very barren, let's leave it at that.

Or maybe not too barren; other than our killer, also in the asylum is an all-girl punk band secretly rehearsing their wailing-I mean, singing which our group of brightly-colored idiots stumble upon. The token black guy's then smitten by the band's token black girl and soon this guy just has to go in and meet up with her, only to be killed with a pair of clamps.

Right after that, ole' skinned Mitch begins to systematically kill off those who enter his asylum from both parties, doing it all in good blood which I'm happy for but still leaves me a little confused as to why he waited for the other five to come around if he could have started his killing spree with the three band girls? I mean didn't he heard that "singing"?

Okay, maybe I'm being unfair here as the movie was intentionally made as a slasher-comedy so these guys are supposed to be dumb enough to give us some chuckles. Sadly, as far as half-bake horror comedy goes, Doom Asylum only half-worked; the silly characters are hardly likable either cuz they're annoying to begin with or they overcooked the cliches they're supposed to be spoofing. They're basically just cartoon characters played by live actors with really bad scripting and wooden acting, with the worst being our killer who, in every murder, just has to spit out something supposedly witty, but fails when you realize one-liners are supposed to be one sentences, not an entire paragraph. (He just had to explain to us his political views...)

There isn't much of a story to tell here either, just some cliched jokes and by-the-book bodycount film theatrics. Thankfully, it's the blood and gore that made Doom Asylum worth a single night's renting, as every character here meet their demise as gorily as possible, making some of the waiting and enduring worthwhile. (Including a death by bonesaw of pre-Sex and the City Kristin Davis, which is a pure winner for me since she played the most annoying skeptic I've seen here. That and I just really hate that series...)

Running on a short 77 minutes and filled in with lengthy black and white footages from the movie The Demon Barber of Fleet Street (1936) (any longer than that and I might have thrown the TV off a window),  Doom Asylum has its ups and downs, but if one's willing to relax and feel smarter than everybody else then look no further! This movie will definitely make you feel just like Einstein, all the while enjoying some dork getting a powerdrill to his head just because he kept chasing a baseball card. If it's not funny, then it could owe you at least that!

Bodycount:
1 female killed in car crash
1 male stabbed on the chest with scalpel
1 male stabbed to death with scalpel
1 male had his head crushed with clamps
1 female dunked head-first into an acid-filled sink
1 male powerdrilled on the head
1 female strangled with stethoscope
1 female gets a bonesaw to the face
1 male gets a hypodermic needle to the neck, toes cut off
1 female crushed to a cube through meat processor
1 male repeatedly stabbed on the eye with a mirror's handle
Total: 11
Posted by Kaijinu at 11:15 AM