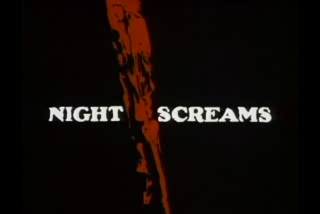 The opening: a couple sitting cozily on their couch watching Troma's Graduation Day. While not exactly what I call a date movie, the guy leaves for a minute to make some burgers out in the backyard (at night?), leaving his lover at the clutches of a gloved killer brandishing a knife, someone she apparently knows since she's hardly surprised seeing them. Of course, she gets killed, beef guy comes back, sees her dead, woodenly tries to sound shocked, calmly makes his way to the phone to call the police, gets knifed too.

And cue killer playing "Chopsticks" on the dead couple's piano. Chopsticks. Above all things.

Then comes morning, when a local highschool wins a game of football and some teens opt to celebrate their victory by crashing to a teammate's house later that night after some brewskies and a live show involving real-life cheerleaders posing as back-up dancers for a singer we don't know and care about. The problem with this plan, though? Earlier that day, two escaped convicts made their way to this little town and after killing off the local sheriff, his deputy, a guy who owns a diner and a lady patron, they found their way into the basement of a house. The same house where the winning team's supposed to celebrate in, go figure.

But wait! There's more; not only do we have a pair of convicts skulking around, but there's also some talk about someone being released from a nut house, claimed to have shown improvements with their behavior. So could they be the same killer who offed beef guy and lady in the opening? We'll just see as nubile sex-craved teens get their untimely demise at the hand of a gloved killer, who seems to be already waiting for them inside the house.

Night Screams was a good attempt for a slasher movie loaded with possible red herrings and potential suspects, but as far as I can tell that's just about it. The whodunit factor isn't that good as while the plot tries to imply that the killer could be anyone, everyone here are hardly suspicious. (not even the two killers hiding in the house. They made it too obvious in their scenes that they haven't stepped out of the basement)

So basically, it makes you wonder who the killer is but not enough character sand approach to make you engaged; some of the teens are a hammy bunch, especially one plus-size guy who has a knack for doing some odd dance routines which mostly involves him flailing around on his back, but the rest of the cast are paper-thin cut-outs who I can easily label as "Jock #1" or "Slut B". There's a bit of an attempt of make us feel suspicious of the movie's lead guy who is hinted to have some sort of temper problems before. Kinda worked though, but something about it just didn't clicked any interest for me. (Too obvious that it's a set-up, maybe?)

The kills are plenty, moderately gory and partially inventive, most of it kicking in by the last third of the film. It also stinks of late 80s era nostalgia (clothes, hair and all) and the twist in the end is just grim but other than that, I was really hoping it could wow me at some point, but it didn't. Night Screams is just is.

Not exactly a bad movie, just barely made a dent to a very cliched plot line. I can recommend this for the curious types, but surely they can do better.