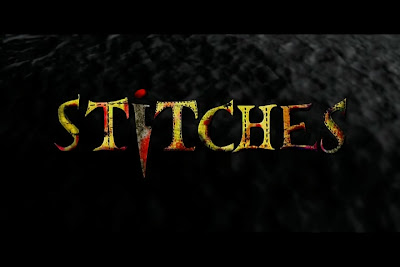 I can't remember the last time I actually re-watch a horror flick on the very same day I first saw it; I may watch a good title again after a week or two, but this particular movie had me wanting to play it again the moment it ended. Thankfully, I just had to restrain myself to get past that but, honestly, I never have this much fun watching a horror-comedy since Shaun of the Dead!

Meet Stitches, a run-down party clown living off whatever he makes at the parties he performs in, maintaining his a trailer house perilously perched on the edge of a cliff and providing for his hot lover. Not exactly the best there is, but he's working hard. I'm sure of it. Really.

We begin on a day when Stitches has a gig to entertain a bunch of snot-nosed brats at a young lad's 10th Birthday party. The kids, one by one, humiliated him to the point they decided to play a nasty prank on him, ending up with the clown face-planting into an erect kitchen knife, impaling him through the head. (Though, that sortah didn't kill him yet, as he tried (and failed) to murder the birthday boy with the same knife he yanked off. Quite a big mess, I heard...)

After Stitches' funeral, Young Tommy, le Birthday boy of the beginning, spots a strange procession of clown mages that night, walking towards a rundown building on the cemetery and doing a ritual involving painted eggs. Tommy follows them and got spotted, yet he was let go with a warning that a clown's job is not done until the party's over and Stitches will return to finish it with deadly consequences.

Keeping this in mind, Tom spent the next six years of his life celebrating his birthday without a party. But being sixteen and scared of a clowns isn't good for his image as a teenager, so he reluctantly throws a party after a long hiatus, inviting his close friends and his little crush in hopes of getting over the past. But, as you can tell, the past isn't gonna stay buried forever. (literally) Sensing the party, Stitches returns as an undead killer with an inventory of party-goods-turned-weapons behind his sleeves (also literally), huntig down those responsible for the worst (and last) day of his job.

Let's put this out of the clear, Stitches is a slasher film that doesn't try to break new grounds as the plot is something we've seen before loads of time from A Nightmare on Elm Street to The House of Sorority Row. The concept of a killer coming back from the grave to exact vengeance to those who killed him may as well be as soggy as an egged face, but Stitches tries to set itself apart from the others by being creative with the premise and adds some delightfully gory and funny twists on familiar grounds. The only shortcoming for me is that I was hoping for a larger bodycount and the slaughter ended way too quickly. I may be just saying that cuz I'm used to high kill counts, but I try not to let that ruin the fact that this is an enjoyable movie. Besides, any flick to pull off some good practical kills and try not to overuse CG ones is more than a respectable film for me.

As by means of comedy, Stitches works well too; the jokes are in the kills and in the dialogue, well-written, imaginative with its theme (clown as a religion? Do tell~) and paced to keep us watching in anticipation for the murders and in laughter while we wait. The casts are likable and colorful, and performances ranges from fair to acceptable. Ross Noble as Stitches has to be a friggin landmark here; he definitely got the character performance to make this killer clown as memorable as any other with a little more comic relief. He's a big comedy hit in Britain, so I can tell this gig is a natural for him, to play a killer's as silly yet very formidable as a zombie murder clown with a talent for splatstick. Tommy Knight played the teenager Tom here and despite his little wussy character, I have to say, he does make it fairly easy to root for him with his sad puppy charms.

The film ends with a suggestion Stitches might be back. I'm not entirely hot about the idea of a sequel just yet as you can tell this film has already got a lot going for it. I really hate for Stitches to jinx its own success by a pointless sequel, but I'm open-minded, happy and gorily satisfied by this film, so if there's gonna be one, I'll be sure to keep a look-out for it and just cross my fingers that it'll be good. Now, I suggest you readers try this one out. Claustrophobics, beware! Stitches is destined to be the next killer clown cult classics!

Bodycount:
1 male lands face first to an erect knife, impaled through the head
1 male gets an arm torn from socket, head kicked off
1 male stabbed on the head with can opener, brains scooped with icecream scooper
1 female gets a parasol through the head, exit to eye
1 cat beaten to death
1 male gutted with knife, head inflated into exploding with air pump
Total: 6