Where Have All The Good Campers Gone?: Return to Sleepaway Camp (2008) 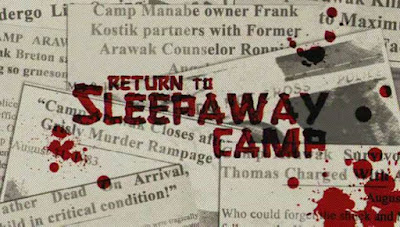 To be fair, the very first Sleepaway Camp was pretty "eh" to me: I don't see it as a masterpiece, but it has enough cheese and inventive killings to at least keep me interested. (Plus, y'know, that out-of-the-blue twist ending that really adds nothing to the plot if you come to think about it? Seriously, so she turns out to be a boy? What about it? ...I did say spoiler warning, right?)

If anything, its sequel, Sleepaway Camp II: Unhappy Campers (1988), proved to be more entertaining for just how batshit insane and cheesy it was, completely discarding a solid story and build-up for a carefree yet still gruesome hack-a-thon where there's a kill guaranteed for every five to ten minutes. The murders were fun, the murderer committing them was fun (and adorable), the whole dang shebang was fun.

A second sequel, Sleepaway Camp III: Teenage Wasteland did rear up a year after, but it was more or less the same formula with a less cheeky killer so while it was fun to watch, I didn't find it that relevant to exist and/or have a spot among my favorite slashers. And then there's the movie for today, Return to Sleepaway Camp, the mid-2000s direct sequel to the 1983 original that also tries to pay homage to the first movie's plot by focusing on bullied kids and making us believe one of them might be the killer, all the while attempting to channel in the cheesiness of the two 80s sequels, maxing it to great lengths. Could have worked, really. But then there's..the main character.

Taking place at Camp Manabe where possible 20 somethings posing as teenagers kids busy themselves playing pranks, talk shit within their cliques, go to the woods to paintball and occasionally smoke the beloved green, there stays a problem child who goes by the name of Alan, who may or may not have some things lacking personality wise as he always whines like a child or bursts into shrieking tantrums if things doesn't go his way. Add the fact that he's quite large, a bully and an asshole to just about everyone in there (and never (fucking ever) change his shirt. EUGH!), it isn't really a surprise that almost everyone bullies him back, may it be intentional or just to teach the whino a lesson.

Of course, with Alan being himself, he screeches for sympathy that only a few are willing to give whenever he gets into trouble (mainly Paul DeAngelo as counselor Ronnie, Kate Simses as Petey and Isaac Hayes as a chef...why does that last one sound so familiar?), but if that fails, he'll mostly insults them bullies back and he, himself, bullies the rest because he can. We're to endure this vicious cycle for half of the movie's run until one prank goes way too far and Alan is last seen running off into the night. And then the kill count rises.

Not gonna lie, this movie is growing on me as quite a guilty pleasure all for the reason that this is the only slasher flick where I felt more sympathy to the jerks than the fat kid we're supposed to be rooting for as they have all a reason for the bullying. I mean, not that I approve any of it, but this movie's choice of a main character is just so dang obnoxious, repulsive, and lacking any shred of respect or self control that he, too, is pretty much a bully too, so any deserving feeling of sorriness to this kid is easily thrown out of the window and he more or less warrants being tormented as bad as he is getting it now.

This sets the movie's supposed mystery as to whether Alan himself is out for blood or if the new string of killings are supposed to tie in with the original 1983 murders, with one of the counselors going bananas suspecting one of his colleagues being a certain crossdressing/transgender murderer from many moons ago back from the looney bin, killing to defend and avenge the oh-so-beloved Alan. Needless to say, this mystery is pretty weak as there's hardly any real set-up to suspect Alan as being the murderer (the killer's build is radically different from the big guy), though I do admit I kinda like how hammy and cheddary they made the reveal at the end.

In fact, the entire movie is camped up with cheese which, I believe, made it somewhat tolerable if one would just switch off and just enjoy the mediocre hilarity of it all. At most, Return to Sleepaway Camp feels like a very long episode of a bad teen sitcom from the Nickelodeon channel until the gruesomes happen and, whenever it does, a good line of the kills are pretty bloody and crazy in their execution so that's another reason to be a bit more forgiving. The cream of the crop among them is a nasty deep fried rendition of the original movie's scalding water scene, a stoner getting force fed with gasoline before having a joint lit for him, and an unfortunate gal getting the pointy end of a literal bed of nails.

If the movie is supposed to be tongue-in-cheek in tone, then I can definitely say Return to Sleepaway Camp (2008) delivers. Only, maybe, too much. Should one succeeds on looking past the fat problem child and his constant "You're ass stinks" screechings, the production looks fair, the performances present fits with the campy tone this film is aiming for like a glove and it handsomely rewards us for putting up with the bullshit by providing solid kills. Not entirely sure if that's enough for one to consider this as a keeper (sure as shit it wasn't for me), but I can honestly say, especially if you're just curious or consider oneself a fan of the Sleepaway Camp franchise with some shred of self respect, it's a rent!

Bodycount:
1 male had his head completely dunked into a deep fryer
1 male force-fed gasoline, set ablaze with a lit joint
1 male gets a cage full of rats around his head, eaten through
1 male had his groin torn off with a wire noose attached to a jeep
1 female gets entangled on a length of barbwire, jeep crashes to a tree
1 male gets a sharpened broom stick impaled through his head
1 female sandwiched underneath a nailed bed
1 male found flayed alive
1 male got his head crushed underneath a dropped car wheel
Total: 9
Posted by Kaijinu at 11:29 AM