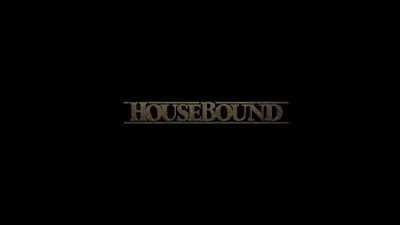 Kylie Bucknell is a teenage troublemaker with an anger issue to match; her latest scheme was to steal a heavily protected ATM machine, which she didn’t count on to be shatterproof and idiot-proof. She's eventually caught red-handed but instead of being thrown into jail, she is given a chance to have a calmer sentence by being placed in house-arrest. The problem with this? She’ll be staying with her mum, Miriam, and she’s not overly fond her parent.

Still, Kylie (begrudgingly) agrees and Miriam tries her best to make the girl’s stay comfortable despite being treated like garbage in return. With little to do (not with an ankle bracelet limiting her move) and barely anybody to talk to, Kylie decided to put some of her attention to her mum, or more precisely something she caught her mum doing: talking to a ghost she believe's haunting her home.

Not buying her claims at first, Kylie soon begins to experience the supposed hauntings (machines going haywire, weird noises in the basement, random teddy bear attacks, etc) and unwittingly becomes entangled on an old mystery concerning a dead girl, a local misfit, and a possible murder. Could it all be in Kylie's head though? Or is there really an angry ghost pissed by the new living arrangements?

Housebound starts out as your typical haunting story with an added bonus of teen angst; what makes this more tolerable compared to any anxiety-filled horror movies out there is that the tone is kept at a semi-comical swing thanks to its workable dry humor and characters who are more likable with their quirky personalities. Morgana O'Reilly’s character Kylie might be a slight exception to this as her personality did make it hard for us to warm up to her immediately but thankfully, once she begins to get involved with the mystery, she opens up more and we do get to see her sensitive side and her concerns for her family, all the while still showing us that no-nonsense attitude.

Interestingly, as the plot continues, the mystery starts to swerve to into territories nobody may have expected, which in turn impressed me; the twists were hidden well from us with enough false leads and witty dialogue to distract, slowly revealing itself with every red herring and clues uncovered thus putting the easy to follow, hilarious and complex direction into good use. It’s not so often we get a mystery this workably complicated and unique while being funny and warm at the same time so this is a personally welcome approach.

The last act is where it catered to the slasher fans as our leads play cat-and-mouse with the villain with much effectiveness with that of your typical slasher climax. The villain is terrifying as they came out unexpectedly and their keenness to silence anybody who got in the way contrasts their initial persona. It also became incredibly bloody around this part so bloodhounds have something to look out for if you like your mysteries with a little more red.

In the end, Housebound is a cute little gem of a horror movie with a great mystery, direction, characters, and comedy. New Zealand has done it again with this perfect treat for rainy nights, date nights, Halloween nights, or any nights you feel like seeing this! Highly recommended!

Bodycount:
1 female seen murdered (photograph)
1 male found dead with a cork screw stabbed on his back
1 male stabbed underneath his chin with a rigged fork, head baked into exploding
Total: 3