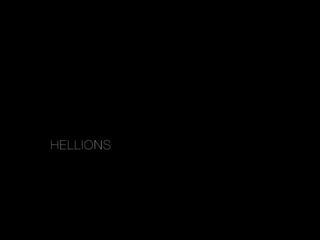 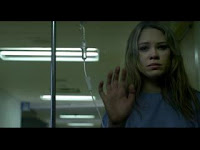 Back from terrifying us with zombies that spread their infection through the English language in 2008's Pontypool, director Bruce McDonald returns this year with a trippy little Halloween movie that is a cauldron pot of killer kids, demonic horror, home invasion, and a lot of surrealism. 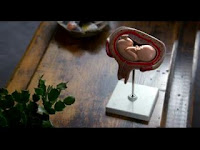 Dora is a 17 year old girl who just discovered she's pregnant with her boyfriend's child and is unsure how to feel about this. This being Halloween night, she decided to stay behind while her mum and kid brother go trick-or-treating, thinking up ways on how she will approach her unplanned pregnancy. This was until a group of trick-or-treaters began pestering her repeatedly, which soon turned out to be a horrifying fact when they returned with the freshly decapitated head of her boyfriend.

Genuinely frightened, Dora was soon plunged into a world where the children rule the red night and any help that will come to her is a play thing for them to manipulate or destroy. Can Dora survive her ordeal or will she succumb to the children's demand of "blood for baby"? 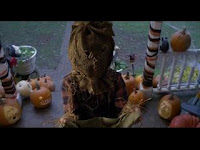 Hellions is a film that dwells on nightmare logic, all the while showcasing some solid horror sequences and even some hint of symbolism. On its outer core, the movie resembles a supernatural siege/home invasion horror movie with some decent slasher-inspired villains and killings. 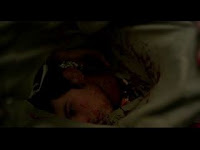 While the count is rather low and all of it occurs offcamera, it was rarely boring and entertaining at a modest level. I did enjoy the concept of the villains being demonic children that appears whenever there is an unwanted and unborn child on Halloween, where the line between the dead and the living blurs. They're hellbent with a bloody mission to get this child in order to increase their number and, as movie monsters, they worked pretty well in the creep factor thanks to their genuinely statures and get-ups, as well as being dangerously homicidal and manipulative in their attacks.

It remained like this for the good chunk of the first half but once the children seems to be getting the upper hand, the movie flips into a dreamlike state where continuities are questioned, body horror is ever present, and haunting imagery is everywhere. I may go as far as saying that this sudden change to the surreal is what divided this movie's audience and I completely understands this as it left too much questions unanswered, leaving the movie too open for interpretation. 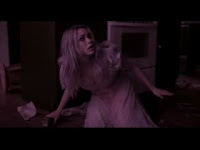 Some may say that these killer kiddies symbolizes Dora's fear of accepting her child and the responsibilities around it and, seeing how much the entire film has this surreal feel to it, it may not be far from being true. Perhaps they were all in her head and the entire attack was just a fever dream but in the end, we will never know whether people actually died and if the supernatural was afoot. 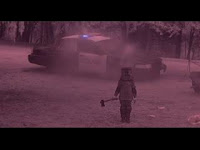 Hellions is a horror movie made to visually frighten us and though the final act may not be as sensible or thought-provoking as the producers wanted it to be, it does made it worthwhile with its thrilling demon attacks and some chilling themes. Maybe next time Bruce McDonald can have these terrible tykes appear in a solid slasher movie cuz, damn, we need more creepy killer kids like these in our hack-a-thon and they have potential!