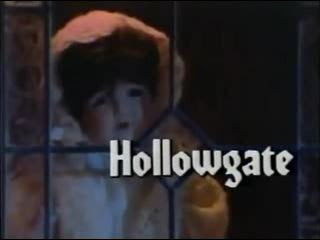 Since when can shit be polished into gold? I would say never in our entire existence but some idiots out there are trying and I can imagine Hollow Gate was aiming for those kind of people as its intended audience.

As a child, Mark was physically abused by his father for (get this) failing to grab an apple from a Bobbing Apple game one Halloween night ago. This traumatized the kid and surely enough he grew up into a cackling madman who gets his first taste of murder by blowing up a car while its occupants are still in it, and got sent to the nuthouse after attacking a girl who doesn't like ice cream and movies.

Fast forward to the present, Mark is now confined to his grandmum's estate called Hollow Gate after being released from the nuthouse. Halloween is right around the corner as well so his grandmum thought she can help her grandson get in touch with society again by allowing him to attend her upcoming costume party. Excited about this, Mark thanks his dear grandma the only way he can: sticking a pair of scissors to her eye.

Some time later, four extremely random teenagers in need of costumes for a Halloween rave decided to help out a local costume shop make some deliveries, in exchange for some wigs. One delivery was for the Hollow Gate estate and Mark decided to trap them inside so he can have some fun killing them, as one costumed persona at a time.

Hollow Gate is obviously terrible for a good lot of reasons from beginning to end; the acting is as terrifying as the lack of logic and solidity of the plot itself, the kills are hilariously bad even for a C-grade slasher, and the madman's supposed gimmick is anything but praise-worthy memorable. It also slugs its way into the slasher portions so the wait can be unbearable seeing we have to sit through terrible writing and acting.

But, perhaps for those who loves a cheesy bad movie, all of this can be a good thing; again, the film seems to be aiming for a specific kind of audience as we all can honestly tell that it's not going to cater for everybody' taste. I find myself liking it a bit for all the unintentional(?) laughs I got watching this and I guess for those who possesses an iron gut for bad cheese and laughably terrible production can join me.

For everybody? Not! But bad-movie enthusiasts are welcome to try Hollow Gate! Just try to outrun the murderous combine...

Bodycount:
1 male and 1 female immolated in car explosion
1 elderly female stabbed on the eye with scissors
1 maled knifes on the gut, thrown hatchet to the head
1 female shot, ran over with a tractor plow
1 male mauled by dogs
Total: 6
Posted by Kaijinu at 10:36 AM