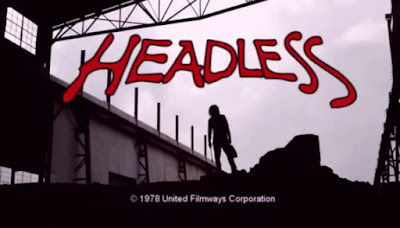 If necrophilia offends you, then Headless is going to be no cake walk.

Shot and marketed as a supposedly lost slasher from 1978, the film features a nameless skull-masked killer who, under the guidance of a skull-headed and possibly imaginary boy, hunts and murders women before decapitating them and violating their freshly chopped heads.

Unknowingly caught in this is Jess, a girl who spends most of her time working at a disco roller rink in order to support herself and her weed-smoking slacker boyfriend. When the killer sets his preying eyes on Jess, he takes his time to stalk her and murders anybody that got in the way, all the while treating us to some trippy visions and flashbacks revealing the events that turned him into the insane monster we see right now.

Originally a faux-trailer and movie featured within director Scott Schirmer's debut 2012 thriller Found, Headless became a reality after a successful crowd-sourcing and, truth be told, it is shockingly grittier than most of the slashers being released nowadays in a manner that it stays true to its supposed grindhouse origin.

Taking cues from early slashers like Driller Killer (1979), Maniac (1980), and Don't Go In The House (1980), Headless focuses more on the exploits of the killer rather than his victims and it can be a bit unnerving to sit through seeing the film made it clear through the man's screams and brutality that he is one unwell individual.

With a good chunk of the movie concentrating on the murder spree through the killer's perspective, Headless resembles no more than a feature-length stalking scene, only with multiple hardcore murders, disturbing display of necrophilia and some bits of flashbacks revealing that the killer was raised by an abusive mother and an incestuous older sister. (As most masked maniacs are) This being said, the film was close to having no story and, honestly, it almost felt like that as while our supposed main girl Jess goes through her own subplot, it barely made any direct connection to the killer's murders until the last act where one of her friends gets killed and Jess finds herself kidnapped and tortured along with her boyfriend. This was a rather workable way to keep the viewers from being overly bombarded by Headless' unrelenting horrors, though I wouldn't say Jess' situation is anywhere less distressing (unless you find poverty and rocky relationships enlightening) and, in the end, her story's nothing more than a tricky ploy for those who're looking forward to see someone stop our maniac.

So is Headless a good movie? On a technical sense, it is. This movie can flaunt its gritty direction with pride as it boasts a pacing that works despite some sluggish moments, the talents involved are just okay seeing we only get to focus on three characters, and there is an overall impressive visual work despite one scene looking too crisp to be in a supposed "lost 70s slasher". So yes, I can definitely say this is one movie to try but be warned: showered with top-notch practical gore effects and a distraught portrayal of a lead killer, Headless is undoubtedly a slasher that will divide an audience. There will certainly be nay-sayers who will disregard it as disturbing trash, but some will appreciate its blood-red artsy attempt to recapture raw 70s exploitation.

It's disturbing all through, bound to upset stomachs, and will emotionally drain anybody who isn't prepared for its brand of madness. Heed this warning and you may find a little gem underneath the bottomless pit of bodies and blood that is Headless!