A bit of warmth. A bit of horror. A whole lot of comedy.

Max Cartwright is the teenage daughter of a 80s Scream Queen Amanda Cartwright, who sadly ended up in a disastrous car crash three years ago. The events haunted dear Max into a sullen and very meek girl whose only comfort is her friends.

One day, her mum’s debut movie, a slasher titled Camp Bloodbath, is being played around town as a double feature. Coaxed into joining her friends with the promise of free homework (and as her own means of facing the past), Max and her friends somehow end up transported into the movie while trying to escape a freak fire accident. There, they're acquainted with the movie's characters including one Nancy, a shy-type blonde who was played by Max’s mother; seeing this as a way to bring her mother back to life, Max decided to do whatever it takes to keep Nancy safe and alive, even if it meant breaking her character’s supposed fate.

Unfortunately for her (and for everybody else), the movie’s mad slasher “Billy” is doing whatever it takes to do the opposite and he is picking off not only the characters, but also Max’s friends. Can Max's plan work in the end, or will she learn to move on and save what's left of the casts? 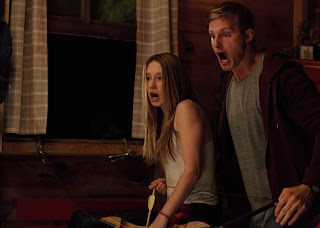 In this generation where you don’t have to be a horror expert to know what’ll happen to the girl who shouts “who’s there?”, The Final Girls decided to poke fun at the conventions of a slasher movie in a manner not tried since the commercial flop The Last Action Hero (1993). The jokes, in turn, mostly revolve around the clichés found in the sub-genre such as the sex=death rule, bad production quality, and the telling of legends concerning the killer, though done with the wittiness found in the first Wes Craven Scream and the generation clashing of Back to the Future (1985), flourishing the movie with plentiful of meta-highlights for showing how much these clichés became so predictable over time.

Fortunately, the movie itself wises up and have these trappings turned against itself to show that the sub-genre still has a few twists and funny surprises of its own, used through some bit of visual comedy such as transition cards being tangible enough to actually hurt the characters, quipping interactions among characters (80s dude says corny insults, modern geek pokes fun at corny insults) and even questioning the already questionable movie logic the sub-genre is known for. (Supposedly dead characters hobbling out alive only to die again. Or did they?)

And when it is not poking fun at slashers, The Final Girls also has something that very very few horror flicks out there have: warmth.

Now, I don’t want to go sappy, but the onscreen chemistry between Max and two of her mother’s incarnations is just strong; when Amanda was still alive, we only get to know her briefly but we can tell in those first few minutes that she’s the kind of mum who wanted to share as much time as she can with her kid to make up whatever's lost between them. By the time she dies, we can clearly see how devastated her daughter become despite her attempts to live a normal life, just showing how much the girl loves her mum and actually felt guilty about the loss. I never seen this much family dynamics since the underrated indie Some Guy Who Kills People (2011) and The Final Girls not only did this approach through Max and her mum, but also with her friends.

Another thing I came to like about his movie was that it has more likable characters than unlikable ones. In fact, all the major characters the movie focuses on (even the supposed mean girl!) have their own quirks, faults and redeeming factors that somehow made them root-worthy and their deaths tragic, shocking, and (for some) maybe a little funny. 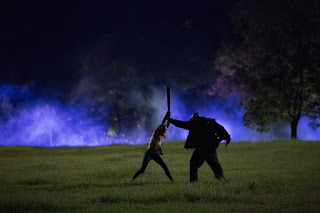 Production-wise, this movie boasts quality from the awesome synthesizer score (and a rocking soundtrack! Watch out for the Warrant's Cherry Pie scene!) to the stylish cinematography, camerawork, and editing. It did slow down a bit once awhile and it's not as gratuitous as any real 80s slasher is supposed to be (no strong gore and no tits) but this was for the sake of character development so I didn’t mind this much. I guess the only gripe I can pick on from this movie was that the killer isn’t all that memorable and he is simply just there; he is supposed to be this Jason Voorhees-clone (even sporting Mr. Voorhees’ “ki-ki-ki-ma-ma-ma” calling card) but he lacks the bulk and his mask just looked too ridiculous (perhaps shrink it down a bit?) Thankfully, the scenes he was limited to were quite awesome, including a climactic attack where he is lured into a trap-rigged cabin and the hilariously gravity-defying last battle where he went full on slasher.

This is definitely cult material for us horror fans and I highly recommend this hilarious masterpiece; The Final Girls has heart, brains, and a whole lot of funny bones to entertain us with! This all said, waste no opportunity on seeing this! Laughs and tears guaranteed!