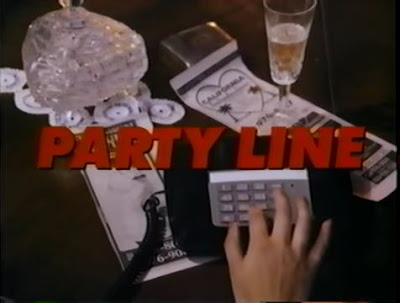 A pair of siblings, Seth and Angelina are targeting unfaithful husbands (and anybody who got in the way) through a popular dating hotline, luring them out with murder on their mind. On their trail is one Lt. Dan Bridges, a detective who likes to talk with his fists, a method that made him great at his job but not so much when it comes to earning the governor's respect. Paired with him is D.A. Stacey Sloan, a by-the-book assistant of Dan's police captain friend. Together, they try to figure out whether these killings have a connection and race against time before the deranged siblings strike again.

Plot-wise, Party Line is everything you can expect from a late 80s slasher-thriller, which is stylized on the outside and cheddar in the inside; it tries to tell a serious story of cops and killers but the over-the-top nature of the premise and the villain themselves make it otherwise.

In fact, if it wasn't for the killer's craziness, the film would have been a rather dull thriller; while I do like the fact how our main leads are two-dimensional cliches of a good cop/bad cop duo and they kept a straight partner relationship, the killer siblings share enough focus on the plot as these cops did and whenever they're on screen, the film wastes no time showing how messed up they are.

To put it simply, the brother and sister once belonged to a wealthy family where Seth was a favored child prodigy and Angelina was the down-beaten reject; Seth was in love (and still is) with Angelina and he decided to prove this to her by murdering their father (who molested Angelina) and their mum (who blamed Angelina for seducing her own father). Problem was (and still is), Angelina hates Seth with a passion for being the favored child but decides to manipulate him through his one-sided infatuation and use him to rid the world of terrible fathers. All of this revealed through us in maddened ramblings as the movie goes forth with the murders and a few other extra oddities such as Seth dressing up in his mum's dress and Angelina teasing it up in front of Seth.

Some sub-plots revolving around the party line were also added for additional thrills such as one concerning a nymphomaniac looking for people to hook up, a babysitter who is just messing around the hotline, and a married father who takes any opportunity to frisk up with the aforementioned babysitter. Most of these people ends up as no more than kill count, but it is not to say some of them did help with the investigation.

As a slasher, Party Line isn't all that; the kills are okay but low on the splatter and bodycount. The story itself is really no more than us waiting for the leads to figure out the connections of the killings while working a way around their own set of personal problems, and a pair of deranged siblings crazying it up and killing whenever they feel the need for it. It's rather forgettable but, then again with characters like these, you can always overlook the hammy plotting in favor of the bizarre,

Thus, in my opinion, Party Line is far from the worse cop-out slasher I've seen and the cheesiness was well worth our attention, at least as a single rental. A little dated but still a fun viewing if not taken too seriously, this is one rarity worth checking out and probably forgotten after a day or two.