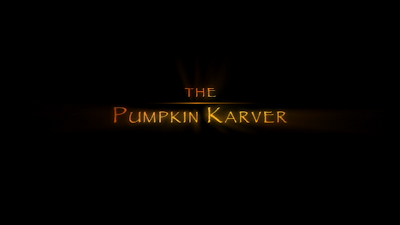 How hard is it to make a slasher movie? Apparently hard enough to confuse and frustrate the production team behind this blood-soaked turd, The Pumpkin Karver.

One Halloween ago, teenager Jonathan was minding his own business, carving jack-o-lanterns out of pumpkins, when his sister's idiotic boyfriend showed up, suited and masked, and began attacking her. Out of defense, he kills the moronic boytoy, much to his and his sister's horror and became so traumatized that he and his family had to move out to another town.

A year later and it is Halloween again; Jonathan and his sister were driving to a party in the middle of rural nowhere as a way to ease away Jonathan's guilt of what had happened. However, bullying exes, raving pumpkin carvers, and weird visions of homicidal masked men aside, there is a pumpkin-masked killer on the loose, lazily slashing up some of the casts whenever they felt like doing so.

As a whole, Pumpkin Karver is a dull dreck that hardly did anything of interest despite ticking away all the cliches you will normally see in a dead teenager flick. It seems to be doing this "is the main guy a killer or not" shtick similar to that from Friday the 13th Part 5, only here it took too long to do anything with its cavalcade of extremely idiotic teens and, whenever it bothers to do so, the murders weren't in any way memorable. If anything, the film's sheer focus on the teenagers and their hapless shenanigans made the film look like a teen comedy of the cheap kind but, given the sort-of serious tone and the fact that these kids are dying at the hands of a pumpkin-masked killer, that should not be the case!

With zero sense of dread and intrigue put to this mess, The Pumpkin Karver was rather disappointing seeing how good some of the production looked, which is the main reason why I gave this movie a chance. Yes, some of the CG visuals were laughable but the quality appeared to be going someplace. But as the old saying goes, "never judge a slasher film by its DVD and/or poster artwork as there is a chance that the film you'll be seeing will go someplace, except that someplace might (or is) out of some guy's butte."

It all comes to a rather silly twist that pretty much came out of nowhere (though there was one scene that pretty much gave it away) and it ends rather good despite how much of a mxied bag the rest of the film was. Hardly the worse Halloween slasher I've seen but The Pumpkin Karver was pretty close on that turf. Hardcore slasher fans and completists may give it a whirl but, again, don't expect a lot from this.